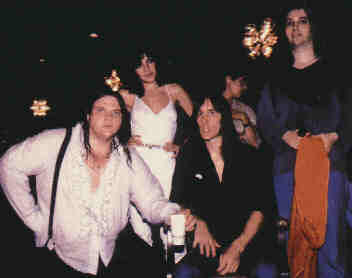 "When you act as a band there's genuine
emotional joy apparent with every success."

NEW YORK - Floods of questions and skepticism always accompany the heralded debut of any new artist. So, finally playing New York's Bottom Line, Meat Loaf's (Epic/Cleveland Int.) much anticipated shows reveled him to be a dynamic large man who runs about the stage like a huge ball of sweat with the most powerful voice this side of Leslie West.

Meat Loaf is actually a collaboration of Jim Steinman's very personal songs intensely delivered by Meat Loaf whose credentials already include a role in "The Rocky Horror Picture Show" and vocals on one of Ted Nugent's platinum albums. Meat Loaf performs with all his heart (and it's a large one, for sure) as he furiously paces back and forth animating, with the vocal support of the beautiful Karla DeVito, Steinman's lyrics of complicated relationships and personal struggle.

Karla is a small, sexy woman who, juxtaposed with the enormous singer, completes a bizarrely interesting couple particularly during one of the set's highlights - a simulated sex scene with play-by-play analysis by sportscaster Phil Rizzuto.

Considering the energy, showmanship and sweat Meat Loaf puts into his act, this anti-hero's road to stardom boils down to a race with the almost inevitability of a heart attack. At the Bottom Line, in a state of drenched exhaustion, the hulk acknowledged, "If you want to see death, stay for the late show."

Meat Loaf's vocals are the predominant part of the show and are only diminished by a striking and uncanny tonal resemblance to a passionately crazed Harry Chapin. His large band's Phil Spector-like sound perfectly complements the tension-filled songs as do Karla DeVito's husky vocals which lend an air of urgency to that tension. Meat Loaf is a true rock and roll mutation - catch him while you can.