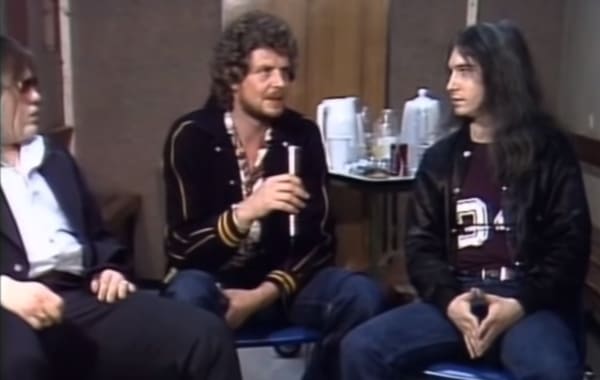 "It's hard for me to write unless I can visualize it in a film or on stage."

Int.: You guys look like one of the most unlikely couples in rock today. How did you get together?

Jim: We got together doing theater in New York City. He auditioned for me for a play I had written music and lyrics for. He came in and auditioned for it.

Int.: What did you do before you did this group?

Jim: I did a lot of theater and rock and roll. Mainly theater though, professionally. I had written rock and roll for a long time but, I spent most of the years after I had gotten out of college doing theater for organizations in New York. Musical theater and regular theater, writing plays and music and lyrics.

Int.: And what did you do Meat?

Meat: Just went from Texas all around the country, the United States, doing rock and roll and theater, films, television. You name it, I've done it, except writing. I've never written. Oh, I've written songs but, they're really bad. So, you know, when you're a singer you need a songwriter and if you can't write yourself, you look for somebody and (pointing at Jim) perfect team. I worked for Motown, had an act called Stoney and Meat Loaf, Ted Nugent, The Rocky Horror Picture Show, Shakespeare In The Park, The New York Shakespeare Festival - a lot of things. Rock and roll is my first love. We're kicking it! Drums in the background...ahhh!

Int.: Jim, your songs deal a lot with teenage romance, motorcycles, cars...What kind of perspective do you have when you write these songs?

Jim: Obviously, extremely warped. Mainly, I think, romantic is the key word. I think of the album as instead of an album of just seven songs, I think of it as a fairly unified collection of seven visions or dreams or even an adventure. When you start playing the record it's like setting off on a voyage, on a series of adventures through this kingdom, this world where it just so happens that almost all of the people in this world are teenagers. That's just because I think that's the best kind of world. If you have only teenagers, at least musically through the course of one record, you're bound to get a lot of excitement, romance, violence, chills and fever, a lot of sex. And those are all very good things. A lot of motorcycles. I mean, it beats Perry Como, doesn't it?

Int.: True. Another question, how did you get the current road band together? Where are these musicians from?

Meat: Okay, well, we saw about 1200 musicians - Jim and myself and our road manager Sam Ellis and they came through those. But, actually, we put ads in papers in the States like Village Voice, Rolling Stone, things like that. But out of all the people that answered the ads we never got any musicians through the ads themselves, only through word of mouth, through people who had been to the auditions, did we get our musicians. We've been out on the road since October the 29th of '77 and we'll stay out on the road, maybe, until the middle of October - almost a whole year since we started.

Meat: She's from a band called Orchestra Luna. That's what she did for like two years before she came with us. She came with us due to the fact that the song we do on the album, Paradise By The Dashboard Light, was originally done on the album by Ellen Foley and Ellen was committed to some TV show in the States and some other things so, she really didn't want to go out on the road. So, I had seen Karla about two years before and said she'd be real good. Then I had to convince other people - Karla's fantastic. I always sing with women from the time I started in 1967. It like a Beauty and the Beast trip, you know. I'm the beauty and they're the beast. Stoney and Meat Loaf - she was the beast, I was the beauty.

Int.: Can you tell us a little bit about your musical background, your musical tastes which lend to the album?

Jim: Well, when I was growing up the first music that I really loved, interestingly enough since we're in Germany, was German music. I grew up listening to Wagner and Little Richard. I used to play Elvis, Little Richard and Jerry Lee Lewis then I'd switch over to Tristan and Isolde and then switch back to Little Richard. That's enough to make you totally demented right there. That was in the late 50's, when I first started listening to music - I always listened to opera, always loved opera and classical music. After I finished listening to that, in the 60's, then I was a big Beach Boys fan. I loved the Beach Boys and The Who along with The Stones and The Beatles and The Kinks. English groups - mainly English groups. In the 70's I haven't liked too much except for my own music and Bruce Springsteen. Those are the major ones.