" "…Actually I didn't expect Jim to say 'yes' to producing me, anyway. I only asked him because I'm a huge fan of his records, especially his solo album, and when my manager and I were discussing my comeback we both agreed that I had to sound the best or nobody would take me seriously.

So we thought: 'Why not go for the best producer?' It was a long shot and, to begin with, Jim said 'no' because all he'd heard was 'Heartache'. But we sent him some new demos of the sort of songs I wanted to do and he obviously realized then that I could sing. So he invited me over to New York to talk to him."

There followed a Gothic scene which was pure Jim Steinman. Imagine a large darkened room, not too dissimilar to some of the sets in the video of "Total Eclipse" (which, incidentally, was shot in an old lunatic asylum and scripted by Steinman himself) and a big grand piano down in the middle of it. Usher in Bonnie Tyler to find the man himself seated at it like the Phantom Of The Opera declaiming the old Credence Clearwater classic 'Have You Ever Seen The Rain?' and an Ian Hunter/Eric Bloom collaboration, 'Going Through The Motions.'

"I loved them both. Which was a good thing really because he told me later that if I hadn't he wouldn't have worked with me. Then he played me the two songs he'd written himself, and I knew we were away. The album took three and a half months to record and the atmosphere in the studio was so exciting because he used so great musicians… " "

" "...We spent time looking for songs that would establish me as a rock singer." Steinman was approached early last year, turning Bonnie down once before coming up with the rough draft of the single (Total Eclipse). He thought it was such an unlikely combination, such a vast change, that it might just work. I've always been a big fan of Phil Spector and he was the closest thing to it. He thinks of songs visually and they all seem to be epic of some sort. 'Eclipse' is about someone who want love so badly she's lying there in complete darkness..." "

" "…Bonnie wanted her singing to be as raunchy as hell and exuberantly threw herself into every full-blooded scenario Steinman painted her. 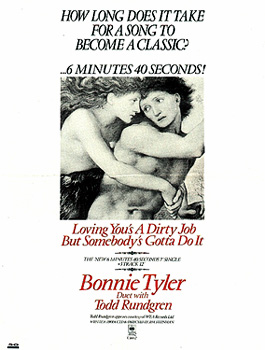 He also did a bit of re-writing on some of the songs Bonnie came up with for the album. In "Getting So Excited" (previously recorded by Lee Kosmin), a ribald song about a party, peanuts on the floor gets changed to ribbon of blood on the floor, while he added a recurring spoken line "I'll do anything for love..but I won't do that" which he wound up reciting himself because Bonnie refused to say it…" "

" "…I always thought she had a great voice," he (Steinman) says. "She reminded me of Credence Clearwater Revival's John Fogerty, probably my favorite male rock 'n' roll singer. Her voice isn't pure or smooth. It sounds ravaged, like it's been through a lot. It's what rock 'n' roll is all about…"

"…One of the best things about the album is that most of the vocals are guide vocals. We'd kept three weeks aside to do the vocals but when we listened back we realized it would be hard to improve on the good ones because the atmosphere and the mood was there…

…It's a Jungle Out There was one of the songs that Jim came up with; quite surprising for his taste in music with that touch of reggae in there. We did it with the same band but it didn't have the right feel to it somehow so we got in a more ethnic band. I really like the track but I think it's the poppiest on the album…"