A scene from Jim Steinman’s first draft of Neverland.

(scored for an "army" of electric guitars and a symphony orchestra)

A strenuous, leaping, muscular display of energy and movement - - Peter and his Guitar take on all three Guards. As much as anything else, this dance is a rocketing "pas de deux" for Peter and the Guitar, in which he begins to truly discover, channel, and master the forces of the magical "instrument." Through the billowing, sweeping curtains of dense vapors, now rushing out uncontrollably, Peter and the Guards prowl, lunge, parry and battle. 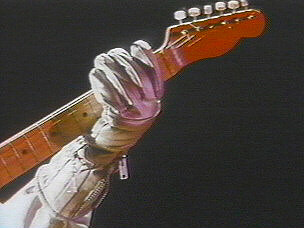 The other Boys are unable to get at any of their weapons to help, and would, in any event, be helpless against the fiendish high-tech weaponry of the heavily protected Guards.

But the Guitar deflects all their guns’ deadly rays like an invisible shield, and Peter twirls it around wildly, frantically protecting himself from all "shots." He hoists it up, throws it down, twists it around, leaps over it, swings it underneath, coils around it, whips it forward, wrenches it back, and whirls it behind - - but he never lets go. He wields it like a bayonet, thrusting fearlessly at his attackers. With a series of violent "windmill" circular motions, his right arm thrashes at the Guitar "strings," summoning forth crunching volcanic power chords - - the neck is aimed at a Guard and a devastating invisible force shoots out and hurls the man back against the opposite wall with a smashing crack. Certain notes and/or chordal patterns are seen to have specific powers.

When a Guard leaps on Peter from behind, grabbing him around the throat, Peter, his face turning red from lack of air, rubs the upper neck of the Guitar convulsively. Searing glissandos tear out. The sound seems to piece the man's skin like needles. Blood seeps out of his ears, trickling down at first and then pouring from his nose and mouth. Peter rings out a full chordal assault and the Guard's eyeballs are blown out by the "tidal wave" of blood gushing forth as if an inner dam had burst deep inside his head. 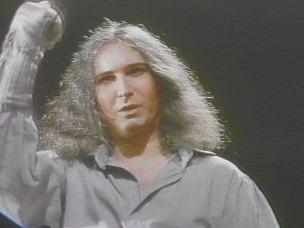 Another Guard is about to shoot when Peter spins around, points the Guitar at his face, and rips out a cascade of propulsive riffs. The guitar glows incandescently. Using it as if it were a blow torch, Peter thrusts it forward. The man's suit and helmet begin to melt, and his face ignites, instantly turning into a ball of flame, the features and the flesh oozing like wax, running together in a formless molten blob.

Finally, only one Guard remains alive. The dead Guards and all the weapons are strewn about the pit, lost in the sweeping clouds of vapors, impenetrable and thick. But Peter soon discovers that this last Guard is the most fearsome, a huge, hulking, murderous fighting "machine" of superhuman strength. This showdown is the most titanic of all. No matter what Peter does, the Guard still survives. The "telekinetic" power of the Guitar, which sent the others flying across the pit, merely seems to knock him back a few steps, like a thudding hit across the body. He continues to advance across the room, closing in on Peter through the chemical fog and gas. Peter "shoots fire" at him - - his "suit" bursts into flames. He rips it off and continues to advance - - slowly, leering, enjoying it, eyes raging, mouth lathering. His only weapons are his hands, which seem to be more than enough, as they reach out, clutching and strangling in anticipation. Like Peter, he is now naked, his brutish body covered from head to toe by scar tissue. It "crawls" across him like an enormous unbroken tattoo, an emblem of years of constant battles. His skin looks as if it had been completely burned away time after time, only to be ultimately replaced by a raw, scabrous, thick, scaly, almost bestial hide. He continues to advance.

Peter "aims" and "shoots" again, and this time his body seems to ignite, but the fire simply burns on the surface of the skin - - crackling, scorching, blistering, spitting and singeing - - but unable to penetrate the outer layer of "armored tissue." It surrounds the Guard with a fiery outline, an eerily beautiful halo of blue light. He continues to advance. Peter lets one piercing note ring out, bending and twisting it until the "string" itself tears away from the neck of the Guitar and lashes out at the Guard, lacerating and cutting, slashing away at the burning skin, slicing long open wounds. Jolts of electricity stiffen his body with every new gash. The Guard is momentarily stunned with each rip, but continues to advance. The string snaps back. 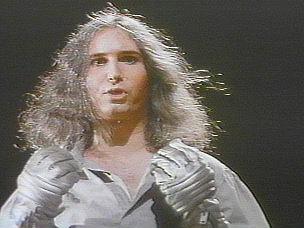 Through the vapors, one of the Lost Boys suddenly runs forward. He sees a gun lying next to a corpse about three feet in front of the approaching Guard. Peter yells at him to stop, but before he hears anything else, ever again, the Guard reaches out and "scoops" him up, and almost reflexively snaps his spine in two and drops his lifeless body behind him as he continues to advance. There are 22 left in the Pack.

The final effort. As the Guard comes closer, Peter steels his body, presses the guitar close to his hot flesh, crouches down like a panther, all muscle and sleek sinew, closes his eyes and seems to go into an almost trance like state as a surging fugue and chorale thunders forth from the Guitar. This is different than anything the Guitar has created before - - melodic, "classical," an Olympian hymn, rich with anthemic splendor. As it builds, the Guard stops, paralyzed by some inner pain. The blood vessels all over his body become suddenly visible, rising to the surface, swelling, "growing," spreading out like thick red roots.

There is a violent pounding behind his chest cavity, the skin expanding and contracting with convulsive heaving force, as if something were beating at the body's wall from inside, ramming against it. The Guitar's "hymn" soars - - a massive, organ-like citadel of sound. At its zenith, the Guard's chest pumps furiously, faster and faster, until, on the final chords, his heart, still beating wildly, explodes out of his body - - breaking away, blasting through the skin and bones, free and clear, released and untethered, skyrocketing like a bat out of hell…

Peter stares through the mists at the corpses littering the floor of the pit, his eyes blazing, his blood racing, his body still taut and ready - - as the Lost Boys move forward through the vaporous haze, now finally beginning to thin out, and slowly encircle him. Amidst the carnage, the Pack comes together again.

The guitar is much quieter now, as if resting - - but it continues to produce ethereal cries - - cascading lyrical moans, silky and empyrean. It somewhat resembles the songs of whales or the soft whimpering of a powerful animal, as it licks its wounds after a triumphant but savage struggle…