"Meat was the most mesmerizing thing I'd ever seen," remembers Steinman. "He was much bigger than he is now, he was fucking huge, and since I grew up with (German composer Richard) Wagner, all my heroes were larger than life. His eyes went into his head, like he was transfixed. [At the audition], he sang "You gotta give your heart to Jesus"… I can seem arrogant at times because I'm certain of things and I was certain of him."

Meat Loaf: "When I first met Jim he was sharing an apartment on 102nd Street with I don't know how many people. His bed as in the kitchen. It's headboard was the refrigerator. I said, 'Jim, what if anyone wants something from the refrigerator?' He said, 'Believe me, no-one does'…"

More Than You Deserve enjoyed modest success, but is significant as the starting point for the classic "Tonight Is What It Means To Be Young" and for the show-stopping title number, which appears on Meat Loaf's 1981 album "Dead Ringer". Steinman returned to another of his lyrical obsessions, Peter Pan, for his next project, Neverland, in 1975, by which time both he and Meat were touring with the National Lampoon show (in which they had replaced Dan Aykroyd and John Belushi). Three of the songs in Neverland - "Bat Out Of Hell", "Heaven Can Wait", and "Formation of the Pack (All Revved Up With No Place To Go)" - were exceptional, the pair felt, and Steinman began to develop them as part of a seven-song set they wanted to record as an album.

"I never intended to do music, I didn't think I was a good enough musician. I was gonna do film and theater, but I figured, 'This is fun, let's do this,'" Steinman said. "I didn't want it to be just a bunch of songs. I wanted it to feel like you were entering a cinematic or complete theatrical environment. No one could deal with it. They couldn't figure out what it would sound like finished."

As he reminisced, Steinman wore an expression somewhere between baffled and amused. He found it almost impossible to 'get' real life. "I never thought of the songs as being personal songs in terms of my own life...But they were definitely personally obsessive songs," he admitted. "They were all about my obsessions. I mean, none of them takes place in a normal world, for me. They all take place in very extreme worlds, very operatic again. The key word is really 'heightened'."

Steinman's imagery was, like The Dream Engine, revved up and testosterone-fueled. Songs like "Paradise By The Dashboard Light," "Two Out Of Three Ain't Bad" and "For Crying Out Loud" echoed the textbook teenage view of sex and life: irrepressible physical urges and unrealistic romantic longing - written by a man who'd never been nagged for leaving the toilet seat up.

"I was a teenager right when sex was going from being overly repressed in the early 60's to totally free in the 70's and it was very confusing," confessed Steinman. "Shit, I remember shaking like a leaf the first time I was having sex. Terrified I was doing everything wrong, and a little bit horrified."

The essential innocence of his vision, though, was his saving grace.

"All I can say is that thank God we knew nothing about making albums, because otherwise it couldn't have happened. I wanted to make an album that sounded like a movie."

The process of landing a deal for the completed songs was to prove even more tortuous than the conception, which itself took two years. Steinman and Meat Loaf would make appointments at record companies, and then Steinman would take a seat at a piano and play the entire album, in sequence, while 300 lbs of Meat Loaf sang along. Sometimes Ellen Foley would accompany them to perform the duet on "Paradise By The Dashboard Light". Aside from the bizarre spectacle the pair presented, the music was unlike anything anyone had ever heard.

The closest point of reference - and an ironic one given some of the musicians later involved in the recording - was Bruce Springsteen's passionate and epic "Born To Run" album, released in 1975. Lengthy, piano based songs like "Bat…" and "For Crying Out Loud" were echoed in Springsteen's "Thunder Road" and "Jungleland."

After CBS boss Clive Davis rejected the project, Meat Loaf almost cracked. They were saved by the man Steinman has called "The only genuine genius I've ever worked with," the Canadian musician and producer Todd Rundgren. On hearing the "Bat…" songs, Rundgren claims he" rolled on the floor laughing. It was so out there. I said, 'I've got to do this album…" 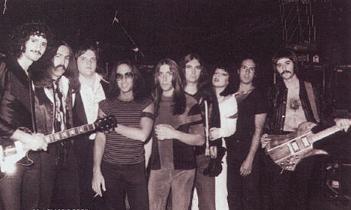 Rundgren took the pair to Bearsville Studios near Woodstock in New York State, and brought in bassist Kasim Sultan and Roger Powell (keyboards) and Willie Wilcox (saxophone), who played with his band, Utopia. In addition, Steinman recruited drummer Max Weinberg and pianist Roy Bittan of Springsteen's E Street Band. But it was one man who was to bring the project together. It was a time for heroes, and Steinman and Meat Loaf had found one.