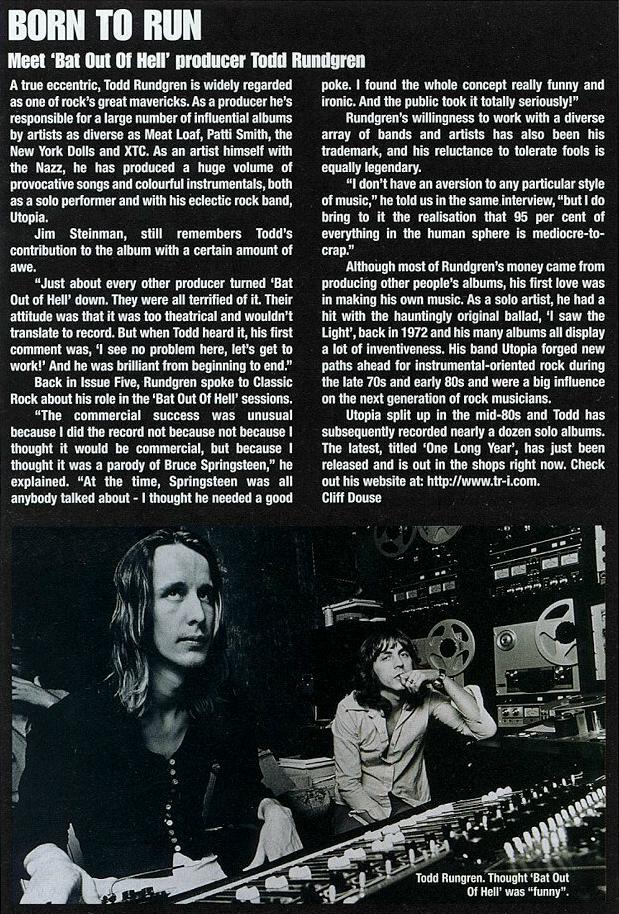 A true eccentric, Todd Rundgren is widely regarded as one of rock's great mavericks. As a producer he's responsible for a large number of influential albums by artists as diverse as Meat Loaf, Patti Smith, the New York Dolls and XTC. As an artist himself with the Nazz, he has produced a huge volume of provocative songs and colourful instrumentals, both as a solo performer and with his eclectic rock hand, Utopia.

Jim Steinman, still remembers Todd's contribution to the album with a certain amount of awe.

"Just about every other producer turned 'Bat Out of Hell' down. They were all terrified of it. Their attitude was that it was too theatrical and wouldn't translate to record. But when Todd heard it, his first comment was, 'I see no problem here, let's get to work!' And he was brilliant from beginning to end."

Back in Issue Five, Rundgren spoke to Classic Rock about his role in the 'Bat Out Of Hell' sessions.

Rundgren's willingness to work with a diverse array of bands and artists has also been his trademark, and his reluctance to tolerate fools is equally legendary.

"I don't have an aversion to any particular style of music," he told us in the same interview, "but I do bring to it the realisation that 95 per cent of everything in the human sphere is mediocre-to-crap."

Although most of Rundgren's money came from producing other people's albums, his first love was in making his own music. As a solo artist, he had a hit with the hauntingly original ballad, 'I saw the Light', back in 1972 and his many albums all display a lot of inventiveness. His band Utopia forged new paths ahead for instrumental-oriented rock during the late 70s and early 80s and were a big influence on the next generation of rock musicians.

Utopia split up in the mid-80s and Todd has subsequently recorded nearly a dozen solo albums. The latest, titled 'One Long Year', has just been released and is out in the shops right now. Check out his website at: http://www.tr-i.com.