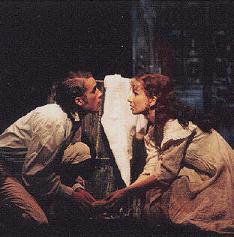 The vampire's immortal existence is not an easy lot. He can certainly ravish the throats of young females or, if he prefers, strapping young lads. But sometimes the even the devil is overcome with dread when he reflects over the coffins of those he has sucked dry throughout the centuries, recognizing his "insatiable craving." The ballad of regret is carried by a sweet melody - the perfect accompaniment for howling.

And now the vampires have arrived in our town, those voracious blood-sucking creatures whose predecessors so successfully opened their mouths to shed blood, sweat and tears during a two-year run at Vienna's Raimund Theater. Sometimes they appear among us, brushing past rows of seats with dangerous proximity. But don't worry, these vampires walking among us in Roman Polanski's musical version of "Dance Of The Vampires" are really quite human, led by Count Krolock (Kevin Tarte), an imposing vampire who casts enormous shadows on the stage. Those who prefer to roll their noodles in the opposite direction when they eat or elect to save the tastiest morsels on their plate for last will certainly sympathize with this man. This lustful Prince Of Darkness has kept the innkeeper's daughter, Sarah (Barbara Kohler), in reserve for the annual ball at this graveyard palace. 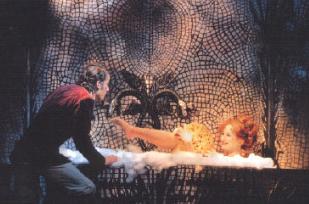 Director Roman Polanski has given the innkeeper Chagal (James Sbano), who involuntarily roams in and out of the home of the vampires throughout the production, traits that are almost less human than those of the Count. The innkeeper, already a true rogue while alive, can hardly be enticed out of the coffin where he ravishes his maid Magda (Maaike Schuurmans) as a vampire. According to the innkeeper, vampirism is really not that terrible. After all, humans are sucking animals too.

Wonderfully overwrought characters keep Polanski's bright gothic play - the master likes to call it a "musical comedy" - on the ball. Comic figures, Professor Abronsius (Werner Bauer, rendered virtually unrecognizable as Einstein) and his assistant Alfred (Aris Sas - both from the Vienna production) scurry among dripping walls armed with hammers and wooden stakes. These two cronies want to rid the world, once and for all, of Transylvania's sharp incisors. Ultimately they fail to reach their goal.

The actors on stage work with grand gestures and each actor becomes only a small part of a greater entity. The music of Jim Steinman, a graying rock composer who once supplied Meat Loaf with song material and who, with his shaggy mane of hair, could easily pass as a vampire himself, powerfully dominates the production. While the music in Stuttgart's previous Stella productions may be characterized as being a little on the inconspicuous side, the vampire selection is certainly full of catchy melodies that stay with you for days after the performance. The biting lyrics of Michael Kunze, a pop lyricist who generally seems to find just the right words, can easily pass into the realm of smut when appropriate. The practiced vampire hunter is certainly not the only one to recognize that "many a neurosis can be cured with a good jab."

It's lyrics like these that bring the house down. Sometimes, when some good old rock 'n' roll erupts from the orchestra pit and the music really goes to your gut, we become just a little concerned for our more distinguished theater-goers, those whose ears haven't been dulled by countless pop concerts and disco nights.

The music truly comes into its own when interacting with the set. In the song "Total Darkness," better known as the Bonnie Tyler hit "Total Eclipse Of The Heart," Sarah and the vampire Count are supported by a singing chorus of the undead. In another powerful scene, our toothy friends rise from their graves to tap their rusty dancing feet at the ball. Despite the impressively smooth operation of the stage machinery (the audience sometimes even applauds the mechanism that shifts the set,) it consistently remains a means to an end, and never takes the spotlight. Sometimes computer controlled light and shadow effects can have a much greater impact than the hardware of the set builders. During the production's most captivating moments, the stage is pure movement. Vampires creep out of every corner, ecstatically dancing around the four-post bed in which poor Alfred is being torment by a nightmare. The mob seethes, the music reaches feverish heights, and suddenly it seems that the snap of a finger could easily conjure up the likes of Michael Jackson.

The "Dance Of The Vampires" is a perfectly staged, horrific fairy tale that also serves as a parable of sorts. After all, theirs is a society in which you have to bite your way through to survive. As immortal beings, the vampire horde ends the production as they sing "Let the bad times roll." Are we in the good time or the bad time of history now? This question remains unanswered.

However, good times are certainly in store for the Music Hall. Both the previews and last night's premiere ended with prolonged standing ovations. 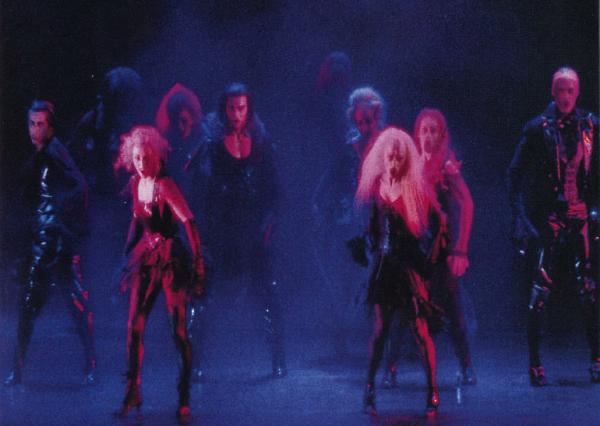