Stuttgart (NHZ). Blood drips from the columns, a grave lantern glows on every table, the bartender dressed as a vampire serves up your Bloody Mary with a pale smile, and water trickles quickly from and ice-carved coffin behind you onto a skeleton. Is that the smell of mildewed? No, it's the fog that seeps out of every opening on the stage and in the lobby of Stuttgart's Music Hall. 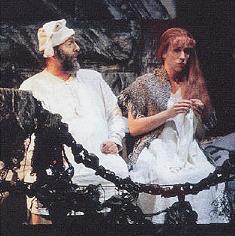 The sickly patient, Stella Musicals, has undergone a veritable blood transfusion donated by Polanski's "Dance Of The Vampires," freshly imported from Vienna and furiously celebrated in Stuttgart (with some new cast members).

Polanski, delicate and shy and not quiet as tall as the bouquet of flowers that threaten to crush him, accepts it thankfully. After all, he's the one who adapted his 1967 film for the current stage production. Humorous, quick and sometimes screamingly funny, the show is certainly the most valuable on the current horror circuit. Accordingly, it's also Stella's salvation, a fact that the show's new producer Peter Schwenkow (German Entertainment AG) is not afraid to admit in front of the 2,400 guests at the Stuttgart gala premier. 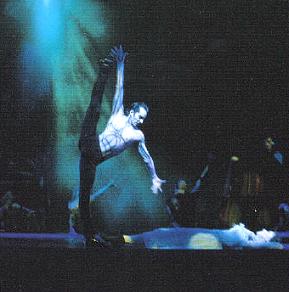 The production cost DM 15 million, and it's price tag is evident. The guests dance the Garlic Rock at a charming Hansel and Gretel inn in the middle of the Carpathian Mountains, while the cranky Professor Abronsius (Werner Bauer) from Konigsberg, a highly successful parody of Einstein, senses imminent disaster. Whenever he sings his delightfully logical arias, the professor sounds like a transplant from Rossini's "Barber Of Seville." His assistant Alfred (Aris Sas) falls in love with Sarah (Barbara Kohler), the innkeeper's daughter, who herself hungers for bubble baths, freedom, men and/or love, and for whom Count Krolock is already licking his chops. Krolock (Kevin Tarte), casting dark and ominous shadows reminiscent of Murnau's Nosferatu, invites the silly, pretty girl to a midnight ball.

Before you know it the moldy paradise of the old inn has disappeared. The innkeeper has turning into a vampire himself, and when the horrified Alfred confronts him with a cross, all he can do is sing tauntingly: "It usually works, just not with me/For I am a Jewish vampire." Polanski and lyricist Michael Kunze often intersperse such witty barbs just to make sure that laughter smoothes out the rising hairs on the back of your neck.

What a castle! Count Krolock, menacing yet melancholy, rules surrounded by the fantastic, gothic walls of his home (set design by William Dudley). Demons lurk among aged green columns, while a sweeping snake-like winding staircase leads to dark crypts. When those who have been bitten stagger out of their graves once a century to despairingly lament about their excruciatingly boring immortality, you really feel a chill running down your spine. The dance of phantasmagoric creatures encircling the bed of Alfred and the professor is a nightmare of shrill, undulating amphibians. Krolock's despondent songs about hunger are met with whistles and cheers from the audience. We know all too well about cravings these days. He gains our sympathy even before pouncing onto Sarah's white throat for the final bite. 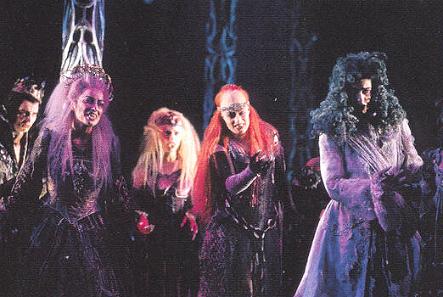 If Polanski keeps drawing on the past by harking back to old vampire films, so does composer Steinman (who once wrote for the likes of Meat Loaf). From Rossini through Wagner to Bonnie Tyler, he has no reservations about mixing and lustfully sucking up tunes from every stylistic direction to make a catchy, captivating, and luscious set of melodies. It's momentary and fun to listen to.

When the vampires finally prevail and tear across the stage, it's as through we've been transported into the piercing and gothic, abstruse cult circles to which some young people, pale and emaciated, devote themselves today. Fortunately, the vampires in the audience did not take this opportunity to bite into the necks of innocent theater-goers. They were just members of Polanski's biggest fan club from Leonberg.