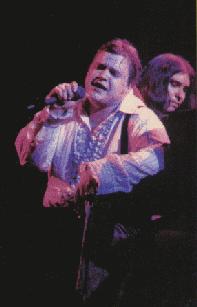 "Meat Loaf became an embodiment of the grand and noble misfit,
with all the humor and bravery and dignity and magnificent denial."

"He's original, I'll say that for him. No-one quite like this guy has ever previously traded under the rock 'n' roll banner.

As to whether his show is all pretentious bullshit or very profound is something rather irrelevant; it's entertaining while it lasts and over when it's over and that was good enough for me.

Having interviewed Mr. Loaf (coming soon folks; place your orders now) I know that Roy Carr's recent assessment of the man ("A surrogate Springsteen with the hysterical pretensions of a holy roller, the subtly of Slade, the desire to out-sweat Mitch Ryder, and no sense of humor") is inaccurate; he most certainly has a sense of humor. As to the rest, well, it's theater innit.

I grooved contentedly on the sound and vision and ended up with reams of notes, so that's what you're gonna get here.

A darkened stage. Sound of snare drum thrumming a march, into a single spotlight steps Karla, who slowly peels off a pair of white gloves. Heavy piano chords introduce the rest of the band, who gradually wind up the Led-Zep level while Karla backs off and the stage is bathed in red light.

Enter Meat Loaf (hoorah, hoorah); a sizable chappie dressed in a white shirt and black monkey suit, clutching a red scarf in one hand and a bottle of beer in the other. The hulk surveys his prey, sneers, then strides forward to do battle. What d'ya think of it so far? Oh well, please yourself.

Assembled company slips majestically into "Like A Bat Out Of Hell," Meat Loaf's almighty voice roaring out over the well balanced musicians. Throughout the long, involved songs he strikes numerous ridiculous, er, I mean dramatic poses, finally hurling away his jacket to reveal The Stomach. Tumultuous cheers, women faint, grown men gasp with astonishment etc.

Show simmers down for some kind of poetry reading, between out hero and Karla, who then duet on You Took The Words Right Out Of My Mouth like some kind of bizarre Sonny and Cher. (Come to think of it, Sonny and Cher were pretty bizarre themselves, though that's neither here nor there).

Diverse influences involved here, I muse. I was also sharp enough to observe that Karla is one very foxy lady, and a fine singer with it. Similar sorts of theatrics sustain All Revved Up With No Place To Go, executed skillfully enough for me to note that Meat Loaf has a great sense of dynamic entertainment.

Paradise By The Dashboard Light allows virtuoso solos from each of the band while, between verses, Meat Loaf veers from kneeling crestfallen on stage to standing defiantly atop the piano, when he isn't groping Karla.

Climaxes to shouts of "rock 'n' roll" before crashing into a high-powered attack on Johnny B. Goode, The Hulk now encased in leather and whomping the shit out of an inaudible guitar. Just as it starts to get really mundane they switch into an accapella duel and then to a pretty amazing version of River Deep, Mountain High, everyone doing their best to top the Spector-produced Ike and Tina recording - and almost succeeding. By this time I'm convinced I'm enjoying myself.

Finally he announces "a torch song" and proceeds to deliver what for me was the finest number of the show, Two Out Of Three Ain't Bad - a genuinely soulful performance, even if it was hammed up like crazy. Give this song to Percy Sledge immediately someone.

Standing ovations and beaming smiles all round, then, what's this? The mighty Meat Loaf skips quickly to stage left, turns, charges and barrels right across the boards in a superfast forward roll to disappear on the run into the opposite wing.