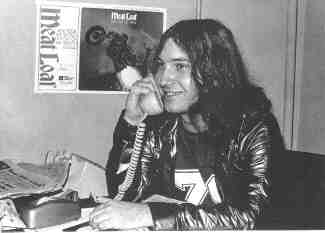 "All I can say is thank god we knew nothing about making albums."

"A master piece…a superior rock classic. The first album in years that I have totally endorsed, freaked out over and absolutely praised for its sheer brilliance."-Jim Girard (The Scene)

"With Meat Loaf's blistering vocals belting out over three octaves, Steinman's Wagnerian rock may well start fires that will be hard to put out."-Peter Barret (Circus)

"The graveyard being ripped apart by a bronzed, Schwarzenegger anti-hero on a Harley Davidson. The warm taste of Woodpecker cider on her lips…Parents shaking their heads in disapproval…Yes, I remember everything. Party-pooping parents, pubescent purgatory and Bat Out Of Hell, the biggest selling debut album of all time."-Shaun Phillips (Melody Maker)

"Its other-worldly cover and musical tales of epic struggles between the forces of good and evil introduced the world to the talents of two individuals - Marvin Lee Aday and his Svengali, Jim Steinman…There can be no doubt that Steinman provided much of the inspiration required to sustain an opus such as Bat Out Of Hell. From the frustrated teenage yearning of All Revved Up With No Place To Go, featuring a canyon full of guitars and a blistering vocal performance from Meat Loaf, to the hushed melodrama of Heaven Can Wait, Bat Out Of Hell was a roaring testament to Steinman's fantastic visions of the American Dream and Meat Loaf's reading of the LP's lurid scenarios. Bat Out Of Hell was a soundtrack for teenage dreamers everywhere, without the elements of schmaltz that such a description suggests."-Jay Williams (History Of Rock)

"Bat Out Of Hell was a staggering debut. Laden with the passionate intensity, from the ferocity of the title-track to the aching power-balladry of For Crying Out Loud, it was an album packed with teenage sex and angst, searing, tender and fiery."-Jon Hotten (Kerrang!)

"It was Steinman the sorcerer, the creator of the rich rock 'n' roll tapestry, that gave flesh to the behemoth monster called Meat Loaf…The songs would be heroic, epic, mythical, all about a land where lost boys and golden girls refuse to grow up. Everybody all revved up and no place to go. Bat Out Of Hell…the record of intense passions and heroic painful love songs sold in vast quantities. The whole album has been released as singles and each one has been a sizable hit making the record something of a miracle release."-Mike Gardner (RAW) Lubricated School Love

"[Bat Out Of Hell] had seven songs, each one blessed by the production hand of Todd Rundgren, roared with power by Meat, and crafted by Steinman - who, let's face it, was the creative whiz. Each song was a mini-opera, fusing hard rock, the storytelling R 'n' B of Leiber/Stoller and the grandiose classicism of Wagner."-Andy Boot (Metal)

"…songs mainly concerned with the amplification of reality…Bat Out Of Hell is an album of insurrections and the incessant adolescent fight against all odds…The album deals with passion - the Bazooka Joe chewing kind with liberal dallops of motorbikes, Coupe deVille's, football games, lubricated school love etc."-Barry Cain (Record Mirror)

"Bat Out Of Hell was better than anyone deserved; it was the exposition of rock 'n' roll as gothic panavision. Steinman's cinematic conceits and Meat's operatic voice…It was pure fantasy, love, violence, blood, sex…From the Wagnerian dash of the title cut to the showbiz classicism of the Sinatra-esque For Crying Out Loud, to the narrative trilogy of Paradise By The Dashboard Light…in a world of fragmented tastes, [it] united the mob by being all things to all men."-Sandy Robertson (Sounds)

"The album's reputation was largely made on the strength of two epic songs, the title track and an item called Paradise By The Dashboard Lights. Paradise was a witty, perceptive insight into sexual power politics, and its high quality was matched by the rest of the album. What was most impressive about it, though, was the way in which the music appealed to a whole range of audiences, from AOR music center owners to heavy metal headbangers."-Bob Edmands (New Musical Express)

"There's a singular explicit fantasy content. Bat Out Of Hell for example? A song about shagging then fleeing on high speed whitewall tires…From the décolleté dames of the videos, to the flying Harley artwork sleeve, Meat's manifesto, co-shaped by Steinman's weird inclinations, has been one long groan expressing the joys of automobiles, auto-eroticism, and wet-lipped American sex dreams."-Roger Morton (Loaded)

"Bat Out Of Hell also possessed (excuse the pun) something which is frequently overlooked. Laced with irony, the album whipped up a ridiculously intense amalgam of Spectorisims, Springsteen road dreams and the type of textured harmonic layers favored by Queen, to create a sardonic phenomenon which grinned all the way to the bank."-Andy Davis (Record Collector)

"Bat Out Of Hell just kept on selling, reaching legendary stature with an unbroken…run in the UK album charts."-Steve Rapport (Rock World)

"Bat Out Of Hell with its overblown production and wildly dramatic lyrical images became a landmark for rock - going a long way to instigating the video revolution and initiating some of the unselfconsciously explosive techniques of heavy metal." -Colin Irwin (Rock World)

"Bat Out Of Hell is a modern day phenomenon. If the Moody Blues went vainly in search of the lost chord, then Jim Steinman and Meat Loaf remarkably found a way of tapping its source back in '78. The vinyl combination of rock 'n' roll mythology, operatic cabaret and adolescent sense of humor provided for a vision of 'Love & Death & The American Way of Rock' that sparked off a mass appeal cross-over the like of which is rarely achieved from a rock base. Perhaps this was because it allowed people, to whom youth was a fading postcard memory, to revitalize the spirit of teenage dreams without feeling either guilty or excessively/uncomfortably nostalgic. Above all else it was imbued with a touch of gothic romanticism that owed much to Bram Stoker and a little to Sam Raimi (after all, on a hot summer night, would you offer your throat to the wolf with the red roses?) And in each of us there lurks the shadow of a child who wants to dance with the devil but never unmasks him!"-Malcome Dome (Kerrang!)

"Bat swings eternal as an ironically sophisticated paean to utter immaturity, positively Wagnerian in its only half-way tongue-in-cheek glorification of teenhood as godhead."-Staff Writers (Entertainment Weekly)

"Bat Out Of Hell" is Rock at its most extravagant and heroic."-Paul Elliot (Kerrang!)

"The gothic rock colossus that is Bat Out Of Hell transcends criticism and logical evaluation. Expressing the quintessential spirit of controlled excess, it is rock 'n' roll."- Stan Vincent (Record Collector)