Jim Steinman: "Steinman's lyrics positively tower above your average teenage rock 'n' roll love song, and deal honestly and humorously with rejection, dying relationships, star-crossed lovers, sexual satire, and polyandry...timeless and universal, appealing to all levels of the rock 'n' roll spectrum ...Steinman's operatic cameos must work...in the same way that Marlowe's tragedies or Shakespeare's comedies did - entertaining the baboons down front but also appealing to the eggheads at the back. It's a poet's vision of mythical teenage America, expanding the confines to place it in a broader historical context but without tipping it into the realms of high-brow academe. That particular feat is thanks to Steinman's ability as a composer and writer...In singing America's body electric they become - alongside Newman, Springsteen et al - this generation's nomination for a place in the pantheon inhabited by Porter, Gershwin, Berlin, Kern, Sondheim, Rodgers, Holliday, Fitzgerald, Sinatra, Lee, Vaughan and all the others."-John Gill (Sounds Magazine)

Meat Loaf: "Superlatives are the only appropriate words to use when introducing Meat Loaf. Biggest. Fattest. Loudest. Most phenomenally successful. It is for Bat that he will always be remembered. Furthermore, the image of this heaving, 20-stone mountain of a man in a sweat-soaked frilly shirt, giving his all in a Gothic exaltation of the backside of the American dream, remains not just a flashback to the 1970's, but an icon of popular culture...Issued at the height of punk, Bat Out Of Hell had nothing to do with the crude but heartfelt rebellion of the new youth. Meat Loaf was not only the antithesis of the bronzed, bicepped, Gothic motorcycle hero depicted on Richard Corben's cover illustration, but he was also exactly the kind of American rocker that punk sought to eradicate. Nevertheless, Jim Steinman's perverse vision of the world as a grandiose heavy metal rock opera, where anthemic, Wagnerian soundscapes battled for supremacy with hysterically frenetic love songs, seemed to capture more hearts with this one album...than punk managed with it's entire 70's catalogue. Make of that what you will."-Andy Davis (Record Collector Magazine) 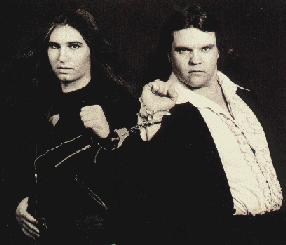 "We're inexplicably bound by the stuff I wrote for him."