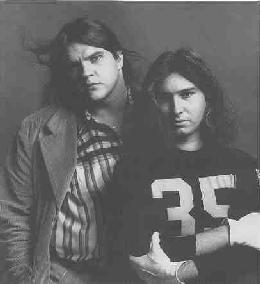 "I like the Hitchcock approach of letting people become
voyeurs because there's an element of the voyeur in all of us."

From beneath the grounds of a shrouded graveyard, a man on his motorcycle soars upward, shattering the face of his grave and breaking the barrier of his death. This illustration appears on the record cover of Meat Loaf's debut Cleveland International/Epic album BAT OUT OF HELL and on this folio. Its power underscores the fruition of a joint musical venture that began three years ago.

Meat Loaf, besides possessing one of the world's great voices, is nobody to mess with. Born in Dallas, Texas into a family of southern gospel singers, Meat built a dynamic reputation 'gig drilling' with a west coast band. He was a lead singer with hard rock super-guitarist Ted Nugent on his album FREE FOR ALL, a gold and platinum record still on the charts. Meat Loaf recently portrayed the singing, crazy Eddie, a slick 50's leather-jacketed, grocery delivery boy in the Rocky Horror Picture Show. He's got deep roots in gospel and R&B and his ballads soar into the stratosphere, but the dark, burning heart at the center of this singing giant is always pumping out powerful rock and roll, thick, rich, explosive and hard, an outpouring so feverish and exciting, it would take a coronary bypass to stop it.

Jim Steinman, composer, arranger and pianist, grew up in the glazed and disoriented world of rock and roll 'midst the over-heated imagery of Claremont, California. Being abruptly removed to Long Island, he absorbed the best of two coasts of rock and roll. An avid practitioner of transcendental amnesia, he remembers nothing before the first golden moment he heard a Fender Telecaster overloading a Marshall amp.

Meat Loaf and Steinman joined forces in the National Lampoon Show. Their partnership flourished rapidly and within a year they were billed to perform at Carnegie Hall. Shortly after, together with producer Todd Rundgren, they recorded their sensational BAT OUT OF HELL album.

Full musical accord is evidently shared by the two partners in both thematic and stylistic interpretation. Both men are intensely romantic and their message is clear. Steinman's lyrics explore the many regions of man's desire, and Meat Loaf responds at gut level, echoing the changing shades of the love dream.

BAT OUT OF HELL continues to soar high!