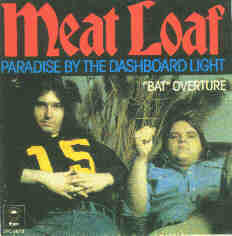 "Rock 'n' Roll is the most bombastic form ever -
heightened, over-sized, gigantic, thrilling and silly."

"If you were pre-pubescent in 1977 and averse to the anarchy of punk, Bat Out Of Hell was your icon. Set to a lavish orchestral rock soundtrack, the album was an epic of the purplest prose - learnt word for word by the obsessive - all fumbling, sweaty teenage sex and do-or-die rock 'n' roll clichés, performed by the blimp Meat Loaf and the bimbo Ellen Foley, the antithesis of Travolta and Newton-John, with a fittingly grandiose production from sword-and-sorcerer Todd Rundgren. It was a monster smash of the period. The presence of Springsteen sidemen Roy Bittan (piano) and Max Weinberg (thunderous drums) gifted Bat Out Of Hell with unique ersatz pomposity (and, many would argue, drew attention form The Boss himself) which in turn was enhanced by Rundgren's Utopia colleagues' period mystical bent. It was a surreal production that would have befitted Ken Russell at his worst; Wagnerian to the limit of Steinman's obsession with that composer; extreme beyond the most fantastic imaginings even of Lloyd-Webber...Like Dark Side Of The Moon, Bridge Over Troubled Water and Thriller, the gothic rock colossus that is Bat Out Of Hell transcends criticism and logical evaluation. Expressing the quintessential spirit of controlled excess, it is rock 'n' roll."