THINGS have become rather buzzy on the sixth floor of the Willard Hotel in Washington where I am holed up doing the day job. In fact, I have to report a minor international incident. It all began when a man with a burly chassis asked for a list of people likely to visit my room. It transpired that the floor had been taken over by President Menem of Argentina. In an ideal world he really wanted my suite as well, as apparently it is one of the hotel's finest. Heaven help the other guests if it is, for I have seldom been in a space so depressing.

Apparently the President was feeling jittery about sharing the floor with the composer of Evita. The security people were further rattled by the arrival of my lyricist, Jim Steinman, sporting a particularly virulent, new skull tie, which on closer inspection could also be viewed as two nude girls.

Baroness Thatcher was in town, but I resisted putting her on my list and got my revenge another way. When I go out to rehearsals I get one of the girls to put the Evita soundtrack on an endless tape loop. It looks to me, now that this has gone on for a couple of days, that a deal along the lines of "No Evita, no list" could be brokered fairly shortly.

Requiem for Evita was still booming out, however, when I set out for Galileo, one of Washington's top Italian joints. We were halfway through a splendid dinner when I felt the rhythm "Boom Boom Ba Boom Boom Boom" being tapped on my shoulder. I was alarmed. Was it my pal of the burly chassis summoning me to an audience with his boss?

"Boom Boom Ba Boom Boom Boom." The tapper persisted. I should have guessed the perpetrator for two reasons. Astute readers will already have noted that Boom Boom Ba Boom Boom Boom is the rhythm of the riff of Big Spender from that great musical Sweet Charity. It is but a simple mental leap from burly chassis to Shirley Bassey, the song's most famous interpreter. Behind me stood its composer, the lustrous Cy Coleman.

Cy and his wife joined us and we had a huge laugh. The first thing we noted is that the chef looks exactly like Prince Edward. It is also the first restaurant I have encountered with a formally laid-up table in the kitchen. It has the most astonishing cutlery which looks like something from Edward Scissorhands and operates a bit like that too. Anyway, if you are in the market for a white truffle menu at $100 for eight courses, you'll have come to the right place.

I opted for a splendid ravioli, which was filled with some sort of fish and scallop confection with a hint of truffle. The pasta tasted of squid, not dough. Top marks. We had a really first-rate truffle risotto with properly firm rice and a rather Chinesey dish of veal tripe in an intensely reduced sauce.

Prince Edward - aka Roberto Donna - offers a sophisticated menu of northern Italian cooking and this place has much to be recommended. There is a lengthy, mainly Italian wine list and I was so impressed that I am throwing the pre-Whistle opening party there for visiting Brits.

Interestingly, etched in concrete on the pavement outside is the inscription "Chelsea FC Rules". Is this the Prime Minister's local when he comes here on official visits?

The Inn at Little Washington is a medium-size restaurant with rooms in the heart of genuinely agricultural countryside. It is not much bigger than, say, Aubergine. It is also top-rated in food, decor and service in the 1997 Zagat Guide. In other words, it has a lot to live up to.

It succeeds. I have eaten in some of the best restaurants in the world this year, from Girardet at Crissier, Switzerland, to La Tante Claire in London. For my money this little hotel provides the best overall dining experience I can remember in a long while, perhaps my best ever.

The chef, Patrick O'Connell, gallops through a dazzling and original repertoire with total authority. The attention to detail is prodigious. The staff put you totally at ease. At our dinner for four (Jim Steinman was in the party), we were constantly struck by how a kaleidoscopic range of dishes arrived without fuss and seemingly without effort.

There was sensational seared foie gras on polenta with ham and blackberries, with a sauce that was thick and syrupy with a definite hint of cassis.

There was the best carpaccio of lamb I have ever tasted, slightly gamey and with a sauce of mustard and rosemary. Rethink Vitello Tonnato. Here the mayonnaise is spiked with anchovy as well as tuna and comes with a garlicky, oniony, tomato salsa. Best of the starters was "salmon five ways": tartare, smoked, pastrami-cured, poached and as gravadlax with cilantro. Amazingly, every one was a new experience.

A black truffle pizza with fontina cheese also blew the four of us away. In fact, of the first courses the only quibble was with the tuna tartare which had sesame over it and was too strong for good wine. Sorbets between main courses remind me of Seventies pretension, conceits which destroy the palate. Not here. One arrived - of mulled cider - which did the wine no harm at all.

Main courses featured tuna with foie gras once again, with a rich sauce of heavily reduced Burgundy infused with shallot and finished with butter. There was perfectly timed rack of lamb with a garlic crust and delicious wild mushrooms. There was a layered construction of veal, veal sweetbreads and ham with an extraordinary rhubarb and onion jam.

Jim ordered all the puddings, but I'd given up by this time and can only vouch for six little pots of sorbet including a stand-out peach variety, although I did try lavender-scented crème brûlée, which tasted exactly as advertised. 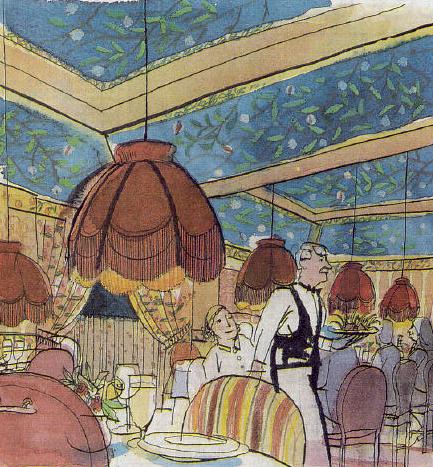 Wine-wise, we kicked off with a Colin Chassagne Montrachet, Les Caillerets '89. Jim felt it resembled Glenn Close, majestic and stately at first but ultimately inviting and luscious. A buttery American Merryvale "Silhouette" 1993 was rated rather like Meryl Streep at high school - "Before she did accents," Jim opined. As the night wore on, we thought it had become an old production of Tosca.

A Joseph Phelps 1990 creation, "Insignia", was very powerful at first, but its taste vanished like a ghost as if it had an appointment in another restaurant.

There was a big dispute about whether a tannic, cigar-reminiscent Château Domaine de la Gafferliére 1982 was more Simone Signoret than Vanessa Redgrave. There was unanimous agreement that the sweet Bonny Doon was Vanessa Paradis. Further, Jim tells me that its vintner is a Grateful Dead freak.

At $98 for dinner, it's very expensive, but no more so than most places of this calibre, and wines are not over-marked-up. The decor is that of an English country house that has been 20 per cent overdone, and there is what looks like a William Morris carpet painted on the dining-room ceiling, which after all that wine was rather disconcerting.

Next week is the opening of Evita so I'll be checking in from Hollywood. My report of my encounter with Robert Parker will have to wait.