The Only Time Left Is Now

Try Not To Be Afraid
(A Song Of Solace)
The Man, Swallow 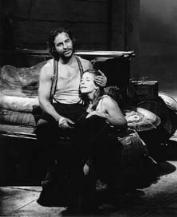 The Man asks a favor of Swallow...He tells her that an important package has been left for him in a far-off emergency box by the train tracks...She assures him that she will find some way to make the journey...She will not fail him... The Man reaches out to touch Swallow's cheek and notices that she is trembling...Swallow sees that The Man is also shaking...In a quiet, tender moment he looses himself in her rightness and is able to comfort her...

A Kiss Is A Terrible Thing To Waste
(A Song Of Regret)
The Man, Swallow, Amos

So many unanswered prayers
So many unopened doors
Why didn't I take it?
Why didn't I make it come true?
The loneliest words you'll ever know

The spell of his goodness is shattered when Amos is heard approaching the barn on his motorbike..."Miracles happen if you play your cards right," The Man reminds Swallow..."Get him to take you to the train trestle"... Amos rides into the barn and 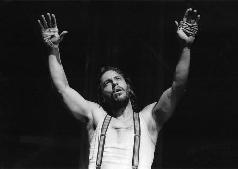 tells Swallow of his plan to leave town unless, of course, she wants him to stay...Amos wants to know Swallow better, he want to know her secrets and offers some of his own in return...When he went to juvenile detention hall he cried...Sometimes he feels like killing himself...Sometimes she cries at the sound of passing trains...She didn't cry when her mother died, she couldn't...The Man secretly listens to their confessions which climax as the trio sing with combined urgency and lament...Amos and Swallow ride off leaving The Man behind...Realizing how much he has come to care for Swallow, The Man is disgusted with himself for putting her in danger...

If Only - reprise
(A Song Of Loss)
Swallow, Poor Baby

On Amos' motorbike, in a precious moment of fun, Swallow and Amos exalt their youth...The moment ends as the mission to retrieve the package takes a frightening turn...Swallow is nearly killed by an on-coming train... Rescued by Amos a stunned and trusting Swallow tells her secret, "He's back Amos. Jesus is in my barn"... Before it can be discussed Sheriff and his deputies appear...Momentarily mistaking Amos for the convict they come close to shooting him but instead rough him up...The deputies are ordered to bring Swallow home...An emotional confrontation between Boone and Swallow ensues as she arrives home in the darkness... She lies to her father telling him she had disobeyed him and gone to the revival meeting...Boone is left upset and confused...Swallow enters the trailer and finds her brother holding a dead kitten...Poor Baby, convinced that Christ would not have let his kitten die, tells her "He ain't Jesus. He's just a feller"...

Charlie Christmas
(A Song Of Devotion)
The Man

When Miss Annie found out
She put a gun to her head
It was loaded!
16 bullets!
She was all dressed in black
And she had her necklace on
When she fired!
16 bullets!
Her sons put her in a coffin
And then put it in a hearse
It was drawn by
16 horses
And they all got on a barge
And they drifted out to sea
To see a fallen angel
Whose fall was over
A fallen angel
With a mustache

The children are lead by Swallow back into the barn because she is certain that "Jesus will be able to explain" the death of the kitten...The Man continues the story he told them earlier by talking about Annie's husband Charlie...He tells them about Charlie playing a game of roulette, never moving, remaining still and never changing his bet...Charlie's conviction pays off because he wins sixteen times in a row before the house notices that a dead man is beating them at their own game... Despondent, Annie takes her life...Again asked for the moral of the story, The Man concludes, "It was their time to go, so they went"...Poor Baby cries out once more, "He's just a fella" and runs out of the barn with Brat in pursuit...Swallow consoles The Man and again notices that he is shaking...He desperately tries to explain to her that there really is no justification or answer as to why God cannot prevent mankind from suffering pain and misfortune...He asks her for a kiss goodnight and they share an intimate moment before Swallow leaves to find Poor Baby...Unseen by The Man, Amos arrives at the barn and witnesses the unwrapping of the package... It's a gun...Amos rushes off in search of Swallow...

Off Ramp Exit To Paradise
(A Song Of Recklessness)
Candy 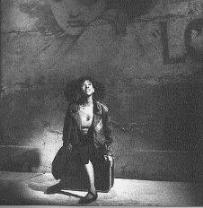 I'm getting out of this hole
I'll be strong and alone
No regrets - maybe one, two or three!
If I had it to do over again
I'd do it to him before he did it to me!

After waiting for hours it has become clear to Candy that Amos is not going to leave town with her tonight or ever...Amos finally shows up but is consumed with finding Swallow...He tells Candy that it's urgent that he find her but, keeping his vow to preserve Swallow's secret, refuses to tell her why...Amos leaves Candy who is joined suddenly by Earl...He tells Candy that Amos had been with Swallow earlier down by the train tracks and the reason "Amos is rushin' off to be a hero" has to do with the man Swallow is hiding...Bitter and furious Candy now has all the ammunition she needs...

Safe Haven - reprise
(A Song Of Hysteria)
The Townspeople

In town the mob gathers and glows with malevolence...

Wrestle With The Devil
(A Song Of Delusion)
Preacher, Candy, Amos, Townspeople 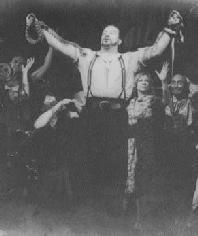 Swallow finds her bother and tries to explain why Jesus was not able to save the kitten or their mother...Still upset Poor Baby runs off and Swallow and Brat follow him into the revivalist's tent...They witness the ceremonial handling of snakes...Candy is also in the tent now as a desperate and angry girl with nothing to lose ...Amos enters the tent as Candy begins to handle the serpents...It is from her mouth that the deadly venom is spewed...Candy reveals the big secret, "The Devil is in Swallow's barn"...

The Hunt
(A Song Of Hatred )
Sheriff, The Townspeople, The Children

Turmoil and rage...The pursuit begins...The grown-ups are off to crucify The Man...The children gather together to offer him protection...

Nature Of The Beast
(A Song Of Truth)
The Man, Swallow 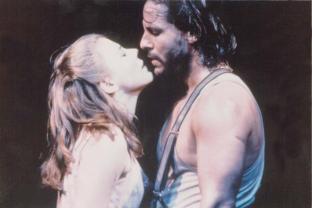 If you go deep down inside my eyes
Do you see a savior?
A prophet?
Or even a priest?
Or do you only see the blackness there
That's the nature of the beast
The one's that you should fear the most
May be the ones you fear the least
If you know me
Than you'll have to know
The nature of the beast
There are hungry devils everywhere
It's on my heart they feast
Let me rise above
The carcass of
This all too mortal beast

In the barn The Man realizes that time is running out and decides to make a break for it...Swallow does not want him to leave her and is persistent with her belief in his decency...The Man tries to convince her that he is nothing more than a worthless, wasted man who has acted as a conduit for true evil...But to Swallow he is the incarnation of her faith..."I need you to be who you are," she pleads...If she is wrong about him - she is wrong about everything...She'd be left with nothing...Selflessly The Man gives Swallow a final kiss on the forehead and shoves her out of the barn which is now surrounded by adults being kept at bay by the children...The Man douses the barn with gasoline, lights a match and is engulfed in flames... 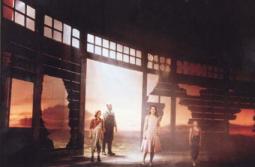 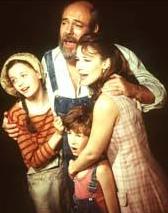 Inside the ruin of the burned barn there is no sign of The Man's body...The enormous neon sign that once read "JESUS LIVES" is also destroyed...With Amos and her family at her side it is obvious that Swallow's belief, however, remains firmly intact, "He'll be back. I just know he will"...The Christmas bonfire on Boone's farm that year was a gift for all who could feel the fire...In it's flames danced the true meaning of faith and hope...