Jim Steinman and Andrew Lloyd Webber have created a true musical drama that is both enriching and entertaining. Although the trend has been to leave weightier topics to dramatic plays, Whistle Down The Wind ensconces big issues in song and winds up being a magnificent example of how it is possible to merge provocative with electrifying and still be able to satisfy a varied audience. 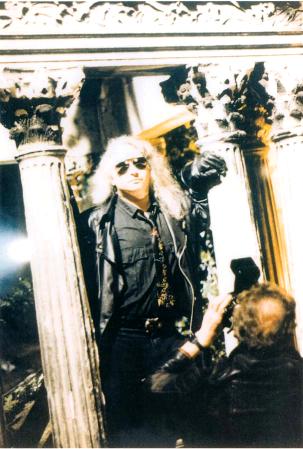 To sum up Whistle Down The Wind simply as "the tale of three kids that find a convict in their barn and mistake him for Christ," is to fail to acknowledge the many sub-plots of the intricate storyline and the deeper beauty of the piece. In each character (or group characterization), in their situations and in their reactions we are given the chance to see ourselves and our world. In distinctive Steinmanian form, the emotionally explicit lyrics do more than tell the story on the stage - they tell the story of every man. There is depth to the lyrics and to the story itself. Essentially an allegory, Whistle Down The Wind is about…

…sin and the transgressions of man against religious and moral law. It paints a picture of humankind as both predator and prey. The willingness to cause another person harm exists in the convict but it also exists within the society that is riddled with intolerance, discrimination and a hunger for his blood. Sin is depicted where there is a lust for hate, where the ability to forgive is absent, when life is viewed as expendable and greed of oneself is emphasized above the good of another.

…loss and the way people deal with pain and deprivation. It's a universal common denominator, whether it's caused by death or another person's inability to fulfill our vision of them, we all lose people we need. The convict begins completely bankrupt in almost every way imaginable, Swallow's mom has passed away and now she's drifting from her father, Amos fails to be the man Candy wants him to be, Annie can't live without Charlie, Poor Baby's kitten dies and, eventually, The Man must leave Swallow. Seeing the diverse reactions of the characters brings us insight about our own responses when faced with loss.

…faith and the need to trust in one another and in God even when there is no logical proof or evidence to support our confidence. Bible-obsessed parishioners are consumed in constant declaration while revivalists handle snakes to prove their devotion to God. Swallow and the children put their complete faith in The Man's goodness and, in doing so, give him the ability to see it in himself. Whistle examines our desire to believe in something.

…redemption and the gift of recovery, salvation and emancipation through sacrifice. It's about the opportunity to be liberated from incorrectness and it's consequence by placing the benefit of another person above personal gain. Whistle Down The Wind is a portrait of benevolence and it's infectious nature. Swallow gives all she can to The Man and, although he begins as a person with nothing to offer, he ends as a person willing to disregards all cost to himself so that he may have leave her unharmed and steady in her convictions. Whistle glorifies atonement.

…hope and mankind's expectancy that fulfillment is possible, prayers will be answered and dreams will come true if we believe strongly enough in them. It is Whistle Down The Wind's most important message – hope is necessary. Swallow's resolve, peace of mind and optimism of spirit reminds us all to invoke the magic around us and inspire the god hidden in others and in ourselves.