Bertolt Brecht's play, "A Man's A Man," a comedy with music, will be presented at Kirby Theatre starting March 1. The play is directed by Walter Boughton and will feature a score of rock music and lyrics composed and adapted by Jim Steinman and played by "The Leaves of Grass." Included in the cast are Craig Dunkerly, Brock Putnam, Toby Webb, Hugh Lawrence, Sarah Harris, David Stewart, and Bill Hart. Tickets are now on sale.

From "To my Countrymen" by Bertholt Brecht

About the play, Eric Bentley, the translator, has written : "In one of Brecht's early plays, ‘In the Swamp,’ a man is, in effect raped by another man. In 'A Man's A Man," a play written a little later, a man is, in a social sense, raped by a group of men. ‘In the Swamp,’ we blithely say, is about homosexuality; 'A Man's A Man' is a social play, an anti-war play; but, in Brecht, the two things are one …… all Brecht's mature plays tend to present social rape, the rape of the individual by a cruel society, partly because for Brecht sex is less a psychic than a social phenomenon, and even loneliness is a matter of feeling ‘weaker than another.’ In the foreground of ‘A Man's A Man’ is the question of coercion and domination … the stronger man, the rapist, is, in the end, discomfited by the weaker, who he has ‘raped.’ After all, who is stronger, who weaker? … An archetypal modern problem: the problem of individual identity. For, though there is nothing modern in the question, ‘who am I?’, characteristically modern is the lack of ‘sense’ of identity, the feeling of I am no one, of which the feeling. I am more than one person, is a variant … An interpretation of ‘A Man's A Man’ must reach as far as the White House. Power, super-power is today offering to fill the terrible void in lives that have no true identity; but this it can never do, since power is itself a void, the supreme void. What we confront today is a lack of will to find a way out or, rather, a will not to find a way out: we tend to wish to be destroyed. But, of course, the various statesmen present this cosmic crisis to their respective peoples as a vulgar melodramatic conflict between their own High Ideals and the Low Ideals of the enemy — and this, to the universal disaster, adds a touch of the ridiculous and the obscene."

As hundreds of thousands more are called up every year for their own glorious rape, Brecht's play seems even more terrifyingly real than ever. 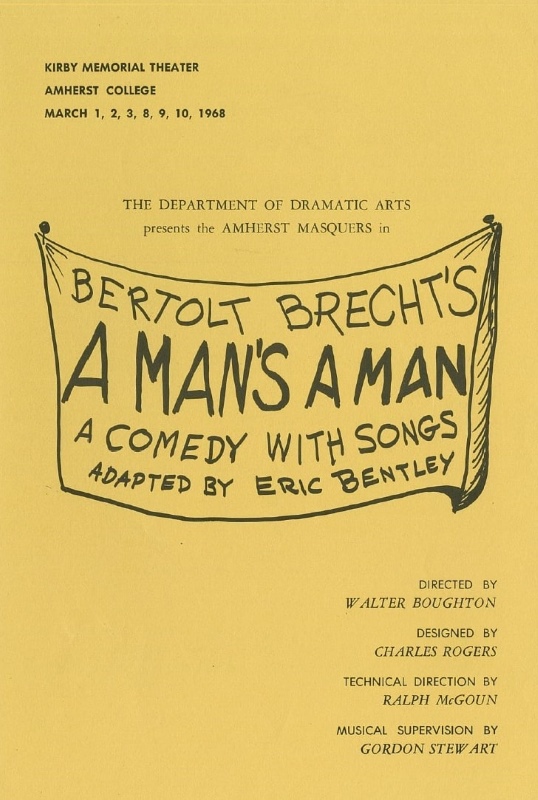 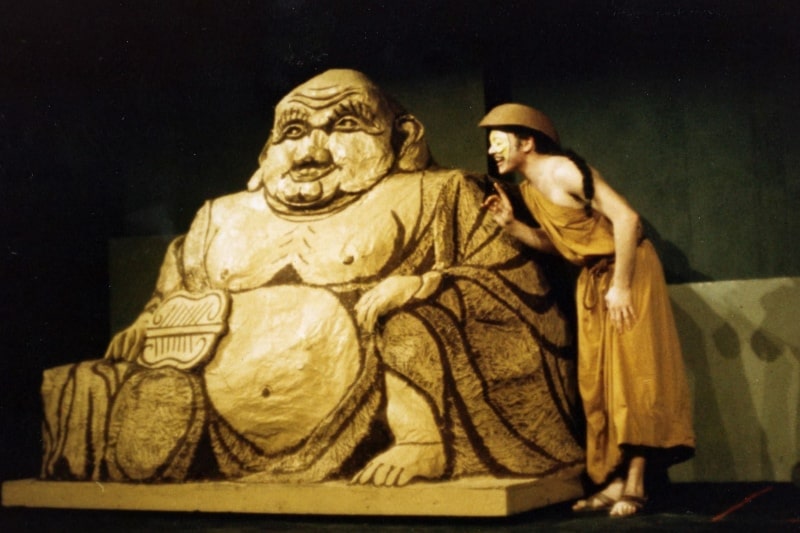 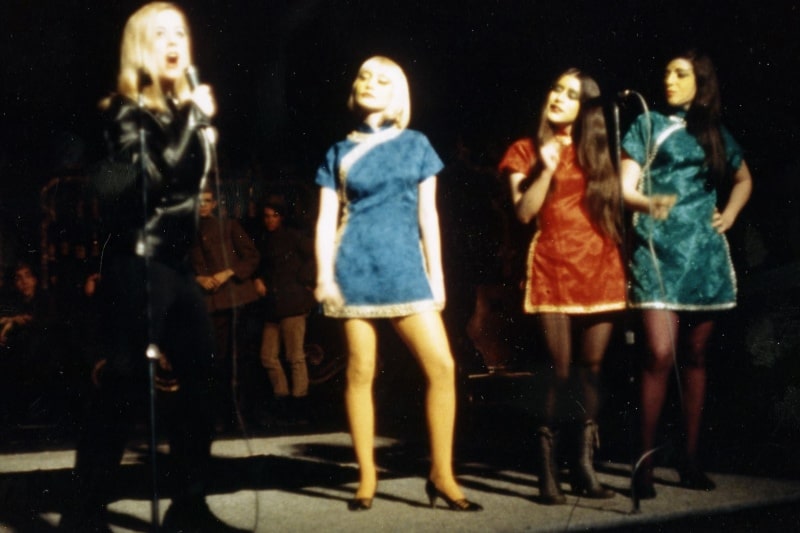 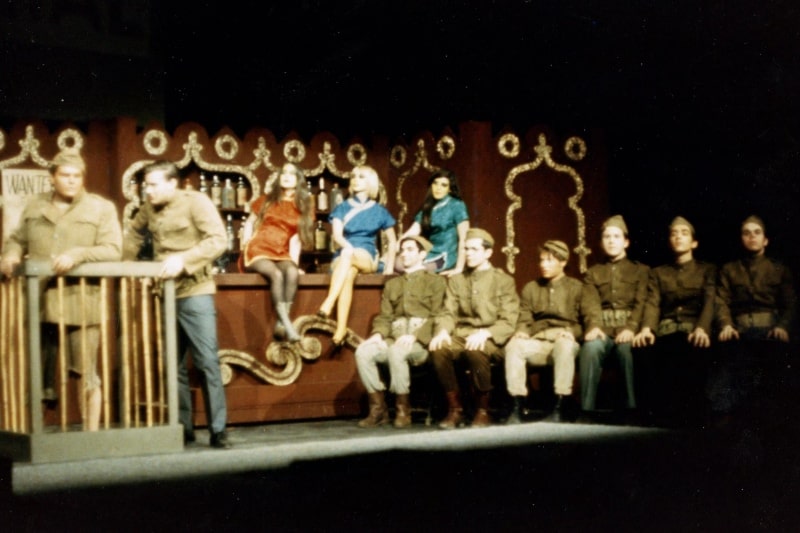 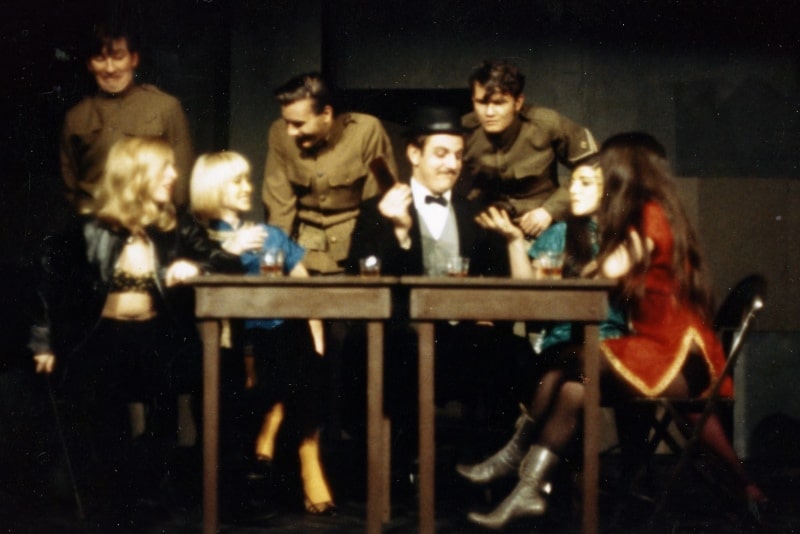 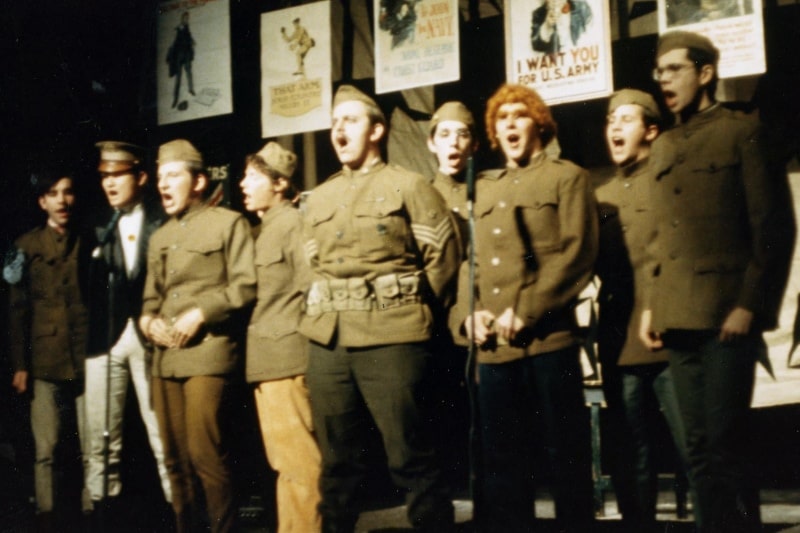 The Amherst Masquers' production of Bertolt Brecht's "A Man's A Man" is probably the most daring and fascinating theater I have seen in last four years here. I for one can only hope that such experimentation will continue, as this play was able to capture and manipulate its audiences as little else that I have seen in the usually museum-like atmosphere of Kirby Theatre. Prof. Walter Boughton deserves great credit for this courageous and exciting innovation in major theatre here. The play will be presented again this Friday, Saturday, and Sunday.

As an experiment, the production itself was not without flaws. But, although these flaws left the promise of the script not completely fulfilled, my experience was, on the whole, one of arousal and involvement. The play is strongly recommended to anyone with an interest in the possibilities of modern theatre.

As for an investigation of the flaws, many of the problems which the play itself encounters result from its inability to match the energy level of the music, a stunning, schizoid and evocative score written by Jim Steinman '69 and performed by the Amherst rock group, "The Leaves of Grass." The "Leaves" played with brilliant musicianship, producing torrential out-bursts of amazingly clear, yet throbbing sound.

Epic theatre is, optimistically, quick in both wit and pacing, stark and almost kaleidoscopic in its imagery. Brecht is a riverboat comedian in blackface whose gag lines are, at one and the some time, satiric and much too immediate to be merely funny. It is this inherent ambiguity — between a superficial, intellectual humor and a deeper, more emotional revulsion at Brecht's stark human landscapes — that is so successfully evoked by the score, and, for the most part, left undiscovered by the production itself.

The play itself is really a play within a play and begins rather auspiciously. After a sprawling, intricate, rock overture, recruits for the Indian army — or for a play about the Indian army? — are exhorted and in some cases coerced into leaving their seats to "change their clothes into a uniform." All to the tune of a song, "Is There Anybody Here?" a sardonic recruiting song. The contrast between the martial pomp that still effects a kind of American Legion pit of the stomach pride and the despair of what is, supposedly, a "patriotic" song, is one of the most vivid and telling I have experienced. It is, however, a cheap thrill, a cheap horror. Brecht's sense of the perverse is not of a bargain basement variety. Clearly, it is up to actors and director to maintain the emotive immediacy of this opening. Clearly it will not be bought with such crude, though effective theatricality. As the play progresses, its ironies must sting deeper, must delve further. Here however the production fails; and fails because it often remains content to wring cheap thrills, cheap laughs from the audience rather than attempting to challenge the subtlety of the script.

For, in fact, this play draws from good vaudeville a tremendous kinetic motion, a constantly propellant, accelerating drive that should leave the audience breathless. It should snap back and forth, move from scene to scene with the clarity and sharpness of a whip-crack. But here scenes are allowed to stand out "full" and overemphasized, transitions are made deliberately and slowly. The whole sense of the Kirby production is of some tightly constructed whole with none of the vexing and inexplicably fast contrasts of true Brechtian vaudeville. The pacing is often that of a slow, amiable, sometimes languorous amble that better suits television comedy.

Especially slow are the trial scene, the final two scenes, and the "bar" scenes. An inclination towards silly "guffaw" comedy is vastly overindulged. Grotesque slapstick fits this play well, but too often the cast contents themselves with a mugging and telegraphing of the punch lines. In fact, the comic nightmare that is the product of Brecht's ambiguous perversity is transformed into a merely satiric broad daydream.

Complicating this problem of heavy-handedness is the set, which is too tacky to be really acceptable. The set for the play offers tremendous possibilities: huge forms rising from and falling to nothing, masses of eerie light, forms, masks, shrouds, angles. At best, the atmosphere should suggest an awesome epic circus : monstrous and diseased. Instead, there is something all too comfortable, all to reminiscent of the country fair here.

Despite these criticisms, there were a great many high points in the production — enough to make the evening as a whole a very worthwhile one. By constantly counterpointing vaguely familiar and sometimes deliberately trivial melodies with lyrics of incredible impact and intensity, the music stood in clear contrast to the general sense of ominous and not very meaningful presence. Especially effective in this way were "The Song of the Both" and "The Song of the Ganges Rives," two fine, moving songs sung with intensity and presence by David Stewart and Sarah Harris.

Stewart and Sarah Harris were, moreover, uniformly excellent. Both seemed to capture the subtlety of Brecht's script and exploit it rather than contenting themselves with merely superficial antics. Stewart's gestures and intonations were well-motivated, and in contrast to most of the production, demure and understated. Harris' Widow Begbick was likewise sensitively and sensibly interpreted and was thus able to emerge clearly as the foil of the insanity ascribed to the other characters. And, although he occasionally bordered on heavy-handedness, Craig Dunkerly was unctuous, broad, funny, nasty, and energetic as Uriah Shelley. Hugh Lawrence, George Bentley, Brock Putnam, and Toby Webb all had good moments in smaller parts.

In all, Brecht's script is much too strong to be ruined by even the weakest production. The Masquers' treatment was by no means totally exceptional. It was however, much more than adequate. Some very fine acting, often interesting directional surprises, and the exciting score always appeared to rescue it from its own inclinations to overstatement. Although this production is a flawed one, it is much too engaging, much too lively to be ignored.

With fewer than 50 seats unsold, the Amherst Masquers' seventh presentation Monday night of Brecht's "A Man's A Man," a benefit performance for the campaign of Senator Eugene McCarthy, netted the town of Amherst's Committee for McCarthy over $700.

The Masquers initially sold all seats to the McCarthy Committee at a dollar apiece; the Committee in turn sold seats to the public at two and five dollars each.

Suggested to the Masquers by the Committee, the idea for another performance received unanimous approval from the cast. Only Toby Webb '69, who said that he was Republican-oriented, was somewhat hesitant; he too consented, however, viewing the production as "another opportunity to perform, valuable regardless of the cause."

Since sale of the tickets to the Committee itself more than covered production costs for the play, the Masquers also secured a small profit from the performance.