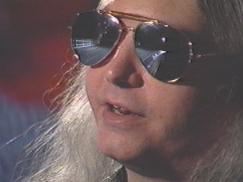 Writing - Everything I do is dictated by the dramatic - by the fact that it's a character singing in a dramatic situation. I try to be incredibly true to that and I think that gives [the songs] a real urgency and a precision that ultimately is very powerful. Every song I write, I write with a theatrical or cinematic context in mind. I've never written a song where I don't visualize a character singing it. That's just the way I work - I couldn't write any other way. So in my mind, it's always on a stage or in a film.

Meat Loaf - It's amazing on a intuitive level, the fact just that he understands these songs. We have such different backgrounds, he and I. Such different lifestyles. We are totally different people - completely. But somehow, within the music, we connect on a level that's pretty strange - because we're so different...Meat is a performer serving a song - and he'd be the first to say that. That's one of the reasons he's such a great performer. He does put the song, at his best, above his own personality or ego or anything.

I'd Do Anything For Love - I started off this whole album with an image of Meat Loaf on stage. For some reason, I started off with a live show image. I'd Do Anything For Love (But I Won't Do That) was the first song I wrote for [Bat II] and it was definitely a 'Beauty And The Beast' kind of story...What he 'won't do' is said about six times in the song very specifically. It's sort of is a little puzzle and I guess it goes by - but they're all great things. 'I won't stop doing beautiful things and I won't do bad things.' It's very noble. I'm very proud of that song because it's very much like out of the world of Excalibur. To me, it's like Sir Lancelot or something - very noble and chivalrous. That's my favorite song on the record - it's very ambitious.

Life Is A Lemon - Actually, one of my favorite parts of the album is [during] Life Is A Lemon, the middle section, where everything is declared defective. Yeah, I think everything is defective, basically. I think that's probably one of the premises of life if you really look into it. Pretty much everything is defective and everyone, on some level, is incompetent. Once you accept that, I think [life is] much more peaceful. That song was very much, to me, a teenager's anthem. To me, you can still be a teenager at any age. It's a certain sense of lack of proportion, which I really admire.

It Just Won't Quit - It Just Won't Quit is about the fact that there are some things you never shake off. It's like the song 'Addicted To Love' - that's what it's about. There's a key line in there: "Is it a blessing/Or is it a curse/Can it get any better/Can it get any worse." And my favorite line: "Is it richer than diamonds/Or just a little cheaper than spit/I don't know what it is/But it just won't quit." That's love, I guess.

Objects In The Rearview Mirror - The hardest song to write and get across was the song Objects In The Rearview Mirror May Appear Closer Than They Are. It was really gruesomely hard to write - in fact, it was the last song I wrote for the record, which was basically done. [The record label] just wanted to stop, they wanted to put it out. And I insisted, I really wanted to write another song. And that was a really emotional song to write. It's a very passionate song. It's really, I think maybe, the most passionate one on the record. I mean, I'm really proud of it because that's really one that goes over-the-top in the sense that it's got images - it has religious imagery of resurrection, it's got images of fertility and rebirth, it has really very good sexual images, images of cars - which I always like.

Good Girls Go To Heaven - To me it's like a teenage prayer - "It ain't right it ain't fair/Castles fall in the sand/And we fade in the air/And the good girls go to heaven/But the bad girls go everywhere."