Go here for links to them all!

(You can still buy a physical copy of the CD online from Amazon UK.) 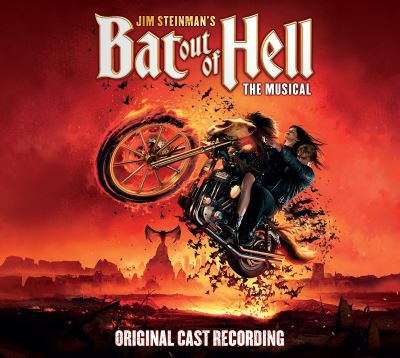 Jim Steinman - "BAT OUT OF HELL what's that? Oh yeah. I remember now, it's been a long time getting this show up and running. I couldn't be happier. And now to have the Cast Album available! I guess Rock N Roll Dreams do come Through!!!!"

Bat out of Hell - The Musical proudly releases its original cast recording, continuing the extraordinary rock n roll legacy of the some of the most successful records in music.

Written by Jim Steinman, Bat Out Of Hell became one of the best-selling albums in history, selling over 50 million copies worldwide after its 1977 release, the fourth biggest selling studio album of all time. 16 years later, Steinman scored again with Bat Out Of Hell II: Back Into Hell, which contained the massive hit I Would Do Anything For Love (But I Won’t Do That). The story of the original album is as epic as its music, involving a long search for a record label that would release such an ambitious album, finding a combustible young singer called Meat Loaf capable of singing the high octane songs and ultimately scoring a huge hit against the odds. But the album was also originally written as a musical by Steinman, making this cast recording the realisation of his 40 year dream.

One of the songs was written while Steinman was an undergraduate at Amherst College in the late 1960s. In the 1970s, Steinman wrote a theatrical musical that was presented in workshop in Washington D.C. in 1974 and featured many of the songs that would ultimately appear on the Bat Out Of Hell album Unique to such a challenging album, new and incredibly talented performers were required to recreate and reimagine Steinman’s opus.

The results are stunning, with incredible performances by a young cast, headed by Andrew Polec as Strat, Christina Bennington as Raven and vocal powerhouse Danielle Steers as Zahara. Favourites including Two Out of Three Ain’t Bad, Paradise By Dashboard Light, You Took The Word Right Out Of My Mouth (Hot Summer Night) and Dead Ringer For Love are brought to life alongside Bat Out Of Hell and I Would Do Anything For Love (But I Won’t Do That).

There are also two previously unreleased songs that appear in the musical - What Part of My Body Hurts the Most and Not Allowed to Love. The winner of the Evening Standard Radio 2 Audience Award for Best Musical 2017, Bat out of Hell – The Musical wowed critics and public alike when it played limited seasons at Manchester Opera House, London Coliseum and Toronto’s Ed Mirvish Theatre in 2017, and has been seen by nearly 500,000 people to date. It began previews at London’s Dominion Theatre on Monday 2 April and is currently booking to 27 October 2018. Jim Steinman’s Bat out of Hell – The Musical is a romantic adventure about rebellious youth and passionate love, set against the backdrop of a post-cataclysmic city adrift from the mainland. Strat, the forever young leader of The Lost, has fallen for Raven, daughter of Falco, the tyrannical, ruler of Obsidian.