Bradley Dean blasted the producers of “Bat Out of Hell: The Musical” when they canceled the tour. But that didn't keep him from the rock-god thrill of his career in the New York run.

On Sunday night, Bradley Dean lost his virginity for what is likely the last time.

For the past six weeks, Mr. Dean, a longtime Broadway ensemble member, understudy and replacement-cast mainstay, has played Falco, the real estate tycoon who thwarts the motor-crossed lovers in Jim Steinman’s extravagant, apocalyptic “Bat Out of Hell: The Musical.”

In the first act, Mr. Dean’s Falco and Lena Hall’s Sloane tear off their clothes, hop atop a burnished Dodge convertible and belt “Paradise by the Dashboard Light,” a paean to teen sex. “I love that song so much,” said Mr. Dean, who lost his offstage virginity in a car parked at a Pennsylvania community pool and can relate.

He performs that song and others — “What Part of My Body Hurts the Most,” “Who Needs the Young,” “I’d Do Anything for Love (But I Won’t Do That)” — with a throaty baritone and an affectionate, chest-hair-flashing nod to the show’s absurdities.

Mr. Dean, 49, participated in a 2015 workshop of “Bat Out of Hell,” which retells the Peter Pan story with more sex and guns and flaming motorcycles. In 2018, he joined the Toronto cast, signing on for a North American tour, which producers then canceled, apart from the City Center run that ended Sunday. This past month, he spent his off hours rehearsing the role of Monsieur André in “The Phantom of the Opera.” He joins that production on Wednesday.

Just before the final “Bat Out of Hell,” performance, Mr. Dean, who had traded his character’s skinny jeans for his own, returned to his dressing room, mostly emptied, to discuss his rock 'n' roll dreams and post-show despair. These are excerpts from the conversation. 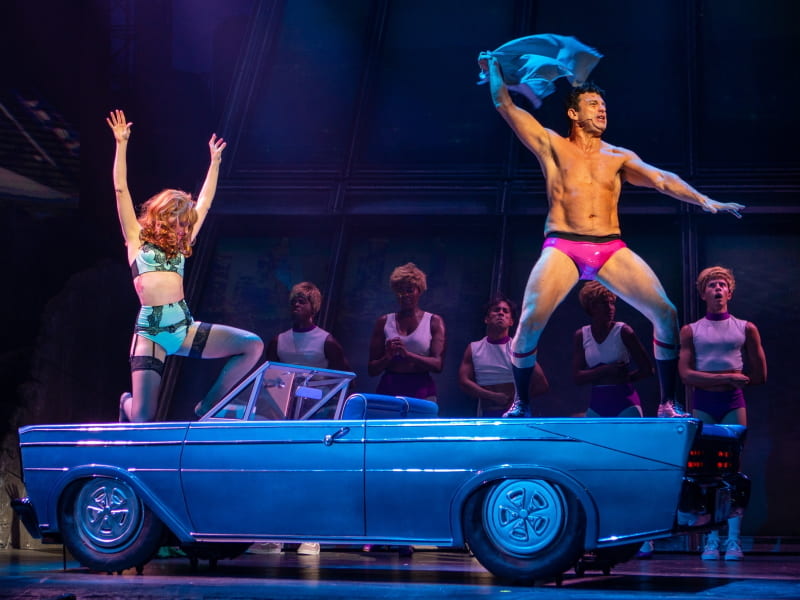 What can you tell me about Falco?

He’s very misunderstood. He doesn’t really do anything too terrible. I mean, he does drug his daughter and he does kill Tink [a teen character in the show], but it’s an accident. We are in a post-apocalyptic landscape, and he’s the only adult around. He is in charge of protecting his family. At his heart, he’s a really good dad. With rage issues.

When the North American tour was canceled, you vented your frustration on Facebook.

I had broken my hand in the show the night that they canceled us. And so I was in pain and in shock. I don’t even remember writing that Facebook post. It got plastered everywhere, and I was like, “Oh no, I called my producers fools.”

How has the New York audience been?

Amazing. The people that this show is right for, they’re my kind of people. I grew up in a little town, Pottsville, Pa., a depressed, impoverished area. Something about the panoramic scope of this music, it was an escape. So I think it’s for people with that story, with that heart that wants to expand and bloom. Romantics, dreamers, common men. I go to the stage door, and I just commune.

How do you feel about your costumes? Some of them are pretty minimal.

They didn’t tell me that I would be basically naked until the first day of rehearsal. I was like, “Damn it, you got to tell a brother that, you want to give a brother a month on that so I can stop eating and hit the gym real hard.”

Is it fun to lose your virginity every night?

“Paradise by the Dashboard Light” was one of the first music videos I remember, the first time I saw something that was a little titillating. So it has a very specific place in my history, and it’s literally the most fun I’ve ever had on the stage. And Lena Hall is about the most fun person I could hope to work with. Her voice is just always so dead center in the middle of the pitch.

How sweaty are you by the end of the show?

Extremely sweaty. It’s theater as athletic event. In the moment, you don’t feel that way. And then you get offstage and you’re like, “Oh no! I’m broken!”

How have you kept yourself healthy?

I go to physical therapy. For my host of injuries. My shoulder has been jacked this whole time. And it’s the vocal Olympics.

So when you’re singing “What Part of My Body Hurts the Most” you’re taking inventory.

It’s very meta. I really am.

It’s the greatest feeling ever. It took a while to figure out how to navigate it, because it’s extraordinarily high and the keys just keep modulating and the songs are 10 minutes long and we’re sprinting around stage and tearing off our clothes. But I figured it out.

Has anyone exciting come backstage?

Meat Loaf. My kids were here the night he came. Meat Loaf actually came up to my son and sang “Who Needs the Young,” like a whole verse of it.

You’ve had a solid career, though most of your roles have been understudy parts and replacements. What’s it like coming second?

I don’t think of it that way in any way. I remind myself all the time how fortunate I am. I’ve gotten really close to a lot of things, to originating a great role, and each time it’s fallen through. That’s the difference between a star and not. I just keep showing up, singing my face off and tearing off my clothes.

Do you think you’ve learned anything about rock 'n' roll?

Just how much I love it. I’ve never felt as full of life as I feel singing this music. And that I want to do it over and over again. I hope this show has another life. Tonight, that’s the end of my time with this character and I have to tell myself, “Maybe it will happen again.” Or the heartbreak is too much to endure.

Will you tear it up at the party tonight?

I have rehearsal at noon, so no. But I’ll definitely have some tears and some beers and bid adieu for now.