NEW YORK — I have but one regret after seeing Jim Steinman’s “Bat Out of Hell — The Musical” at New York City Center: I did not think to bring a Bic lighter to the theater. 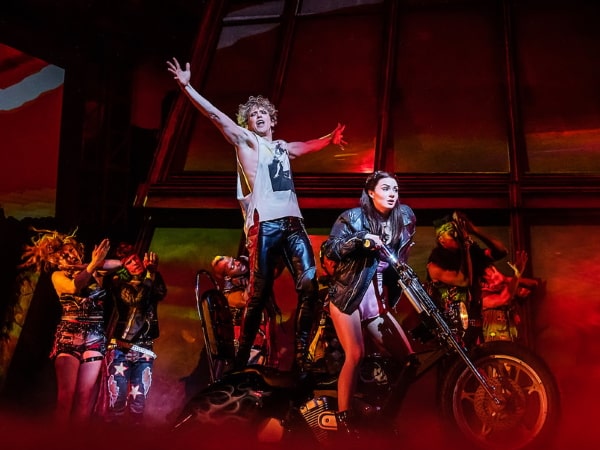 Of course, nobody breaks out lighters at concerts anymore, now that we’re all armed with smartphones that can illuminate the darkest reaches of space. But a real butane flame would have been the perfect, old-school way to show my love for the shameless, high-octane nostalgia trip delivered by “Bat Out of Hell.”

Directed by MIT theater prof Jay Scheib, with book, music and lyrics by Steinman, “BOOH,” as it’s known in the profusion of T-shirts, tote bags and bat-shaped bottle openers sold in the lobby, premiered at the Manchester Opera House in 2017, then moved to London’s West End before bursting eardrums off-Broadway this summer.

The loud, bombastic, postapocalyptic “Romeo and Juliet” is as overblown and irresistible as its catalog of Meat Loaf singles. Finally, a musical to scream to. (And hum-sing-along to, much to the consternation of a scowling gent two seats to my left, who just didn’t get it.)

Excess is Steinman’s stock-in-trade, personified by his famously flabby frontman, Meat Loaf, the unlikely star with the soaring, sinuous voice of a rock ’n’ roll sex god and the bod of a Sumo wrestler.

Composer and singer became rawk royalty with 1977’s “Bat Out of Hell,” the album that launched two of the greatest jaundiced love songs of all time — “Paradise by the Dashboard Light” and “Two Out of Three Ain’t Bad.” The record was championed by the late Cleveland promoter Steve Popovich, who willed it into a multiplatinum, global smash by tirelessly working the phones and hassling radio stations to play it.

You’ll also hear tunes from “Bat Out of Hell II: Back Into Hell” and “Bat Out of Hell III: The Monster Is Loose,” plus a handful of a la carte Steinman classics, including the 1983 Air Supply hit “Making Love Out of Nothing at All” that rounds out the Act 1 set list. (Why have 20 songs when you can have 21?)

“I describe it as feverous, strong, romantic, violent, rebellious, fun and heroic,” Steinman once said about that first, fateful “Bat” album. Those same adjectives apply to his musical, too.

But it’s also as messy and confusing as a road fatality, a collision of imagery and storytelling from dystopian fables that have come before: the 1979 cult film “The Warriors,” the “Mad Max” trilogy and the absurd but gorgeous “Streets of Fire.” (Steinman penned two songs, “Tonight Is What It Means to Be Young” and “Nowhere Fast,” for the overbaked and underrated 1984 soundtrack that also boasts pop numbers from Stevie Nicks and Tom Petty.)

It matters not. “BOOH” is both ridiculously entertaining and frustratingly opaque: a hot mess not to miss.

In its City Center incarnation, running through Sunday, Sept. 8, Steinman’s Wagnerian rock ballads are delivered with passion and skill by a cast led by Andrew Polec as Strat (as in Fender Stratocaster? Gotta be!). He is more Morrison than Meat, at least when it comes to body mass. But the voice that comes out of the 6-foot, 160-pound actor is epic enough to carry the familiar stanzas into the nose-bleeds.

Often shirtless, clad in black leather pants suctioned onto his lean frame and roaring through digital streetscapes astride a chopper, Polec is goofy-sexy, his eyes bulging like Christopher Lloyd’s Doc Brown in “Back to the Future.”

Strat, you see, is a “Freezer,” a casualty of the “chemical wars” that have left him and The Lost, his band of gender-fluid mutants, frozen at age 18. Doomed (or is it blessed?) to never age, they travel by sewer beneath the city of Obsidian, the metropolis formerly known as Manhattan, running afoul of its ruler, Falco (Broadway vet and vocal gymnast Bradley Dean), and his jackbooted thugs.

Back at the cold, forbidding skyscraper he calls home, Falco is unhappily married to the boozy Sloane (Tony Award-winning scene stealer Lena Hall). Worse, daughter Raven (Christina Bennington, with the pale, Goth beauty of Wednesday from “The Addams Family” and monster pipes) is smitten with ageless bad boy Strat.

Raven’s soused mama can see the attraction: “If you don’t go over the top, how are you gonna see what’s on the other side?” Sloane tells Raven on the eve of the girl’s 18th birthday.

The line encapsulates the musical’s theme and aesthetic: No song is too long, no power chord too loud, no neckline too plunging or hemline too high for the glitter-covered grandiloquence that is “BOOH.”

Set and costume designer Jon Bausor shellacs the stage with broken, yellow-striped asphalt and outfits members of The Lost in fringed football shoulder pads, fishnets and the occasional bleached-blond Lollypop Guild ’do. (Think the Munchkins on the catwalk at a Jean Paul Gaultier show.) 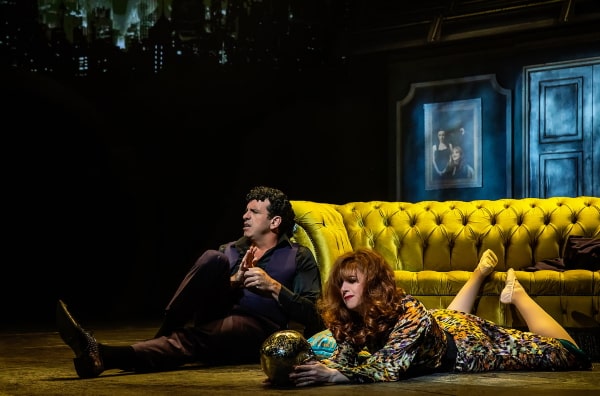 Looming over the sewers and streets of Obsidian is a jumbo screen offering us constant, voyeuristic access to the goings-on in Raven’s bedroom atop her daddy’s foreboding Trump-like tower, a spectacular structure that approximates the massive neck of an electric guitar, its “strings” ever-glowing and changing color.

The happenings are largely silly and forgettable — about what you’d expect from a story of star-crossed lovers in Doc Martens and copious amounts of eyeliner. It’s the overall thrill of the 2-hour, 40-minute ride that counts. (Some dead-hearted critics might argue that’s way too long. I say grab a drink at intermission and stop checking your Fitbits.)

The production is gassed up by some flat-out spectacular numbers. In one, Falco and Sloane ruin Raven’s opulent party in the family dining room by ripping away a tablecloth to reveal a convertible beneath — just the thing in which to dry hump and croon about the glory days when they were deeply in lust in a show-stopping rendition of “Paradise by the Dashboard Light.”

“Ain’t no doubt about it, we were doubly blessed,” they sing. “Coz we were barely 17 and barely dressed.”

A petulant Raven puts a stop to her parents’ embarrassing shenanigans by yanking the engine from the car and tossing it into the orchestra pit, sending musicians scattering.