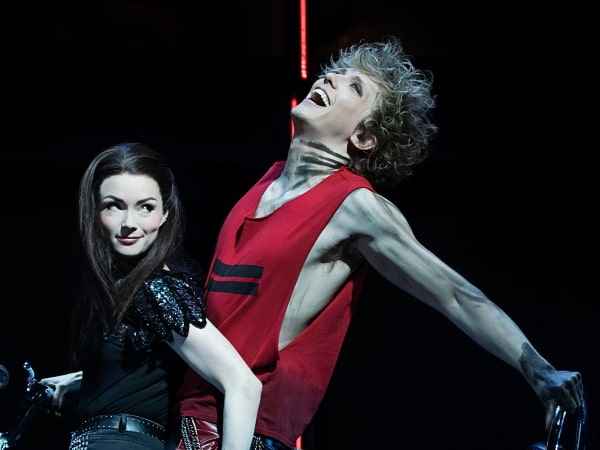 For half a century, composer Jim Steinman has been boldly going where no songwriter has gone before — injecting Wagnerian grandeur into rock and roll. The writer of "Total Eclipse of the Heart" and "It's All Coming Back to Me Now" has never shied away from big emotion and even bigger voices. True to form, Bat Out Of Hell — The Musical is the most nutso, uninhibited, thoroughly over-the-top musical currently playing in New York. Do yourself a favor and see it while you still can — if only to bask in its improbable magnificence.

It's about a pack of mutant forever-teenagers rebelling against the authoritarian rule of Falco (Bradley Dean) in the mythic city of Obsidian. But when Falco's daughter, Raven (Christina Bennington), falls in love with a permanent 18-year-old named Strat (Andrew Polec), it sets the stage for an epic confrontation.

Shadows of Peter Pan pass over this story about teens who never grow up, most directly in the character of Tink (a spritely and androgynous Avionce Hoyles). These may be the remnants of an earlier Steinman musical called Neverland, which stalled in the '70s due to a rights issue. Steinman was able to salvage many of its songs, however, spinning them into the wildly popular 1977 Meat Loaf album Bat Out Of Hell. That entire album is performed here, along with numbers from its two sequels and other selections from the Jim Steinman songbook. The result is two hours and 40 minutes of musical theater delirium. Bat Out Of Hell is jaw-dropping in its grandiosity, unfettered weirdness, and occasional incoherence.

Steinman (who also penned the book) is not one to let dramaturgy stand in the way of a good song: When lost teens Zahara (Danielle Steers and her soulful alto) and Jagwire (Tyrick Wiltez Jones) come together to perform "Two Out Of Three Ain't Bad," we think we see a B-plot emerging, but it never does. When Falco's wife, Sloane (Lena Hall), leaves him following a violent confrontation, we don't imagine that she'll return to their home two scenes later (it seems, just to retrieve her purse). But then, what other excuse would there be for them to sing "What Part of My Body Hurts the Most"? Plotlines are opened and never satisfyingly closed, and that includes the main one. Bat Out Of Hell is not a brilliant work of drama, but each of Steinman's songs packs enough of a dramatic punch to justify its own musical, so it's easy to forgive.

Happily, director Jay Scheib stages a high-energy production that is as visually stimulating as Steinman's music. I have never seen glitter cannons used with such simultaneous profligacy and seriousness. Jon Bausor's costumes offer an array of skinny jeans, mesh shirts, and elaborately styled leather jackets. Bausor's hulking set conveys the smog-choked vastness of Obsidian, while creating arresting Gothic images (my favorite is Raven's vanity overpopulated with candles). The sight lines are quite poor, but video designer Finn Ross compensates by projecting live video from the hidden corners of the stage. This device also brilliantly captures the sublime narcissism of being a teenager, when it feels like you are the star of your own movie. Patrick Woodroofe creates both concert lighting (for the up-tempo numbers) and moody moonlight for the power ballads. It's like watching a series of vaguely connected music videos. 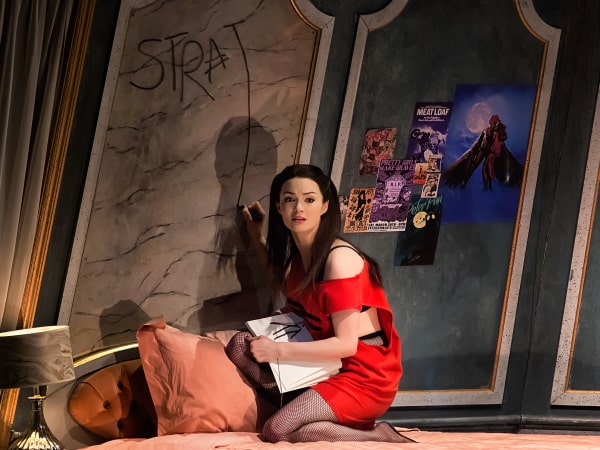 Xena Gusthart's "adapted" choreography may be the one major misstep of the production, regularly pulling focus while adding little to the songs: Why are there extras from an aerobics video in "Paradise by the Dashboard Light"?

Still, you cannot accuse the cast of half-assing it. The entire ensemble commits to bringing Steinman and Scheib's insane vision to fruition: As the old married couple of the story, Dean and Hall blow us away with their classic rock vocals, and their rendition of "Paradise" is a highlight.

Bennington also possesses a killer set of pipes and an unflappable commitment to each moment. Polec leads the cast with the indefatigable charisma of a rock front man. Sporting an electroshock of blond hair, this immortal motorcycle boyfriend rips off his shirt and wraps the microphone cord around his neck — and we know we're in for a wild ride. Sometimes, Strat and Raven just start making out, as if there is an expiration date on their passion — because, of course, there is.

That same sense of the ephemeral is one of the things that make Bat Out Of Hell such a delight. We know we are witnessing something totally impractical and fleeting, and there's a beauty in that. While the trend on Broadway has been toward bio-musicals that squeeze in as many American Idol-ized arrangements of popular songs as possible while presenting a self-serving memoir of the artist, Bat Out Of Hell defiantly flies in the opposite direction: The songs are presented in their full eight- and even 10-minute versions, and the story is pure fantasy. Considering the fitful journey Bat has had in the United States, we may not see it again until its inevitable Encores! presentation several decades from now. Like the joys of teenage rebellion and romance, you can indulge while you still can, or regret missing out for a lifetime.