It's the old "former cool rocker kid who is now a middle-aged sellout to capitalism vs. misunderstood, idealistic youth" routine.

"They're out of control," an exasperated Bradley Dean cries out in a plea of victimization. "Can you believe they tried to destroy my new housing project?"

And from there you can pretty much predict where the plot of Jim Steinman's wildly oddball and frequently hilarious Bat Out of Hell is going.

Sure, the details are yet to be discovered at that point, but it's the old "former cool rocker kid who is now a middle-aged sellout to capitalism vs. misunderstood, idealistic youth" routine. But even though we're supposed to be rooting for the kids, it's the adults who steal the show in this one, as Dean, playing corporate mogul Falco, who's struggling with sensitivity issues, and Lena Hall, as his sarcastically-humored and sexually/emotionally frustrated wife, Sloane, bicker and strut with campy comedics when they're not displaying explosive pipes with blunt show-biz abandon while power-ballading the hell out of New York City Center.

Though fans will recognize the title from the 1977 album that provided Meat Loaf with his breakout recording debut, among the songs included were titles from a stage musical, inspired by J.M. Barrie's PETER PAN (and originally titled "Neverland") Steinman already had in development. 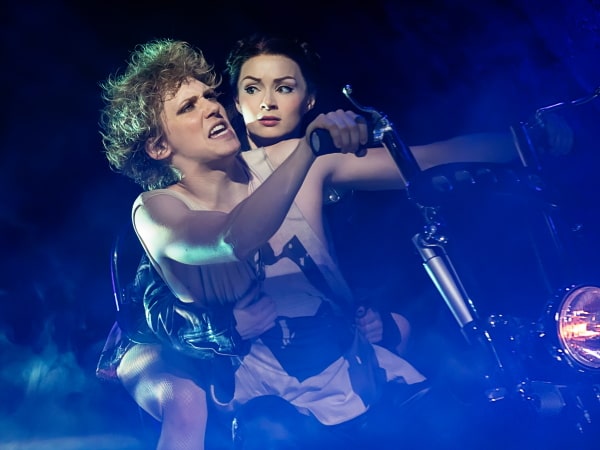 Its current version, incorporating songs from Steinman's subsequent Bat Out of Hell albums, premiered in Manchester and finally hits New York after stints in Toronto, London and Germany.

Opening a week after the last post-apocalyptic adaptation of a classic play to hit Gotham (CORIOLANUS at the Delacorte), this one takes place in what was formerly Manhattan, now called Obsidian, and involves a mutated gang of outcasts called The Lost, all exceptional singers and dancers, whose biological makeup is altered to force them to live as forever 18, which, in truth, is an even less appealing fate than being forever 21.

The golden boy leader of the group is Strat (flashy and charismatic Andrew Polec) who perhaps is in what remains of the Nuyorican Poets Café as he opens the show performing what appears to be a bit of tandem free verse poetry with Raven (more on her later).

It's never made clear why Strat is leading a riot at Falco Towers (to the tune of "All Revved Up With No Place To Go"), but it's quickly put down by the one percenter's private militia.

Back at home, Falco is frustrated to find that his teenage daughter Raven (Christina Bennington, a strong singer who occasionally displays comic chops) is obsessed with Strat, who promises to love her even when he's 18 and she's (gasp!) 38. ("You'll always be 18 to me!")

Naturally, there's the old peccadillo common with such enterprises that the plot is controlled by the need to include the songs the fans expect to hear (for the record, this reviewer has never listened to the album and has no more than a passing familiarity with the most famous of the score's songs) but what makes Bat Out of Hell so enjoyable (aside from generously catchy melodies) is that, for the most part, Steinman and director Jay Scheib seem to desire nothing more than to provide a kick-ass, mindless good time.

Yeah, the second act does lag a bit once the young lovers are together and everything gets all sincere and ballad-heavy, but it's usually not too long before Dean and Hall are back on stage to rev up the fun. Their remembrance of being teenage lovers belting "Paradise By The Dashboard Light" is a campy riot and the strangely titled "What Part Of My Body Hurts The Most" gives them both a chance to make with some thrilling vocal outbursts. (Sadly, Scheib ends both numbers in ways that rob the pair of most of their well-deserved applause.)

The evening's other memorable performance is supplied by Danielle Steers as Zahara, a member of The Lost who also works as a housekeeper for Falco. Her commanding presence and soulful alto reminded this reviewer of Dusty Springfield, as her romantic subplot was expressed in a captivating rendition of "Two Out Of Three Ain't Bad."

Xena Gusthart's club-style choreography may not be complex, but the company executes it with gusto. Jon Bausor's set, consisting mostly of an abandoned subway tunnel and the façade of Falco Towers, also contains a small alcove that serves as Raven's bedroom. Scenes in that space are captured by a video camera operator and flashed onto a large screen, adding some quirky visuals to the mix.

BAT OUT OF HELL may not be high art, but it's a fun high-energy show that doesn't take itself too seriously, from it's rebellious start to its somewhat unclear, but determinedly happy ending.