The Tony winner returns to the New York stage and her first love: rock and roll

When asked how she's been prepping for her part in Jim Steinman's over-the-top fantasy Bat Out of Hell – The Musical, Lena Hall gets all revved up. "I have been preparing my whole life!" she exclaims, and she means it. Although the 38-year-old actress-singer-songwriter is best known to New York theatregoers for her Broadway work, notably her Tony-winning turn as drag king roadie Yitzhak in Hedwig and the Angry Inch, she considers that her day job. 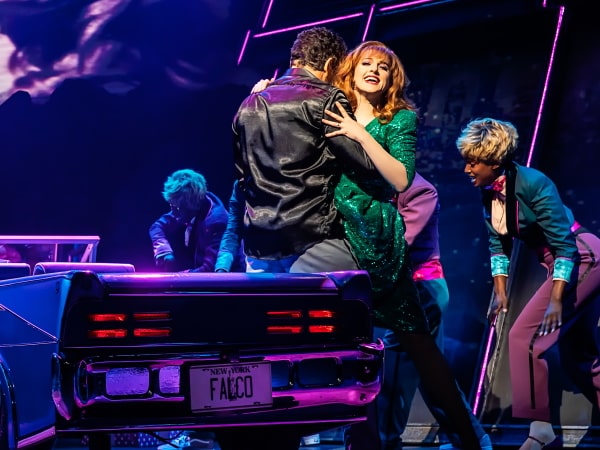 "I have been leading a double life for a while," she confesses, adding that many nights after curtain call she would head downtown "to a rock club on the Lower East Side and play with my band" named, tellingly, The Deafening. "I love theatre for its storytelling and I love rock music -- it brings me a sense of enlightenment, of being closer to a higher power, or God, or whatever you want to call it. But singing rock and roll is like my church."

No surprise then that for Hall, starring in Bat Out of Hell is akin to a religious experience. Currently playing at City Center, the musical is inspired by an iconic trilogy of Meat Loaf albums of the same name featuring songs by Steinman, including "I'd Do Anything for Love (But I Won't Do That)," "It's All Coming Back to Me Now" and "Paradise By the Dashboard Light." All of those hits and many more are performed in the show.

"This music has stood the test of time," says Hall. "It's still so good. There's so much storytelling in all of Steinman's music, you can tell his first love is theatre. I would call this a rock opera with scenes. There's this elevated sense of drama."

There's been a bit of drama off-stage too. After its world premiere in Manchester in 2017, Bat Out of Hell had successful runs in London (where they even hosted special sing-along performances) and Toronto. Last year, a North American tour of the musical was announced and then more or less scrapped. But the City Center engagement went forward helmed by original director Jay Scheib, with original stars Andrew Polec and Christina Bennington returning as the central star-crossed lovers Strat and Raven. Hall is a new addition.

Set in a dystopian future, the musical reads like a mash-up of Peter Pan and Romeo and Juliet. Strat and his gang of forever-young adolescents live underneath a fantastical city called Obsidian. But when Strat falls for Raven, he runs afoul of her father, Obsidian's tyrannical leader Falco (Bradley Dean), and her mother Sloane (Hall), who worries her daughter will make the same mistakes for love that she did.

Although Hall gets multiple showstoppers that highlight her killer pipes, she makes her entrance on a serious note, as she pleads with her daughter to break off the affair. Their conversation is filmed live and broadcast on a massive screen, but their dialogue is drowned out by the number "All Revved Up with No Place to Go." You don't need to make out what they're saying to know that it's tense.

"We see Sloane have a kind of Kardashian moment," says Hall. "I think Jay does these multimedia moments really well. It feels like a comment on social media and reality TV -- you see what the camera picks up and you get this small peek. But it's one-sided -- there's so much going on."

Indeed, Bat Out of Hell has a lot to take in. Although one of the lauded set pieces from the U.K. production didn't make it stateside (sorry, there's no pool), there's still plenty of video, leather-heavy costumes, motorcycles, wild choreography, washboard abs, and rock and roll.

While the show is high on camp -- Hall calls it "post-apocalyptic sci-fi craziness" -- it also has moments of sincerity, and she loves how it can turn on a dime. "The story really boils down to something very universal: family, love and loss, and rediscovering what it is you want."

That last part is something she definitely relates to. "A few years ago, I went through a big shift in finding who I was again," Hall says. "I am now three and a half years sober. It was a whole rediscovery of who I am. I am in the best place I have ever been in terms of my relationship with myself, so telling Sloane's story of strength and recovery is exciting, because I have gone through that."

The actress and singer — who won her Tony Award and earned a Grammy nomination for her performance as Yitzhak in the 2014 Broadway revival of Hedwig and the Angry Inch — has an uncommon range among performers.

At just 7 years old, she got her first big break singing for Pope John Paul II at San Francisco’s Candlestick Stadium in front of an audience of over 50,000. She’d go on to study dance at the Ruth Asawa San Francisco School of the Arts before making her Broadway debut in Cats. She’s since appeared in TV shows and films ranging from Sex and the City: The Movie to BoJack Horseman, while on stage Hall originated the role of Nicola in Kinky Boots before her Hedwig Tony win. 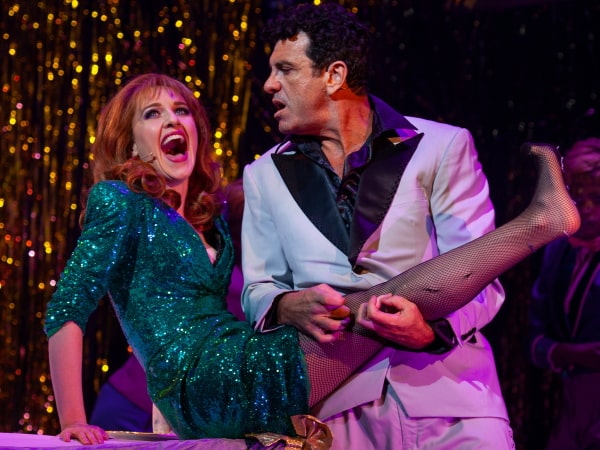 Now Hall, 39, can be seen belting out Meal Loaf’s most iconic hits in Bat Out of a Hell, a wild and thrilling musical based on the album of the same name by the rocker, with music, lyrics and a book by Jim Steinman.

Is this show purely for Meat Loaf fans or can folks enjoy it on their own terms?

For sure the latter. The music alone, without Meat Loaf, Jim Steinman wrote such classic songs, they hold up through time. These songs, they last a lifetime because of how they were produced, how they were written, and the stories that they tell. Even if you don’t think that you know Jim Steinman songs, or if you think that you don’t know Meat Loaf, you’ll hear some of these songs and you’ll be like, “Oh my God, I know that song. He wrote that?”

You’ll definitely recognize a lot of the music, regardless of if you know Meat Loaf or not, because Jim Steinman wrote hits for Celine Dion, and all kinds of people that everyone will recognize. These are iconic songs.

What’s it like performing with a live rock band every night?

They’ve hired an incredible band that knows rock and roll, that can give you this score in its intended life. Nothing has been toned down, nothing has been pulled back. They got a rock drummer that is insane. He’s so good. They also got a percussionist, so we have a drummer and a percussionist with two guitars. They know their rock. We’ve got a female bass player who’s badass. Then, we have two people on keys that are just like … Or, three people on keys. They’re, like, dancing while they’re playing. They’re so into it. That energy, it also elevates everything, elevates the storytelling, elevates everything.

You won a Tony for a rock musical, and now you’re back in one. How would you classify yourself as a performer?

You can’t put me in a box. Technically growing up, I’m none of these. I grew up in the opera world, and I grew up in the ballet world, so complete change. Of course my parents were hippies, and were at all the rock concerts. They saw Jimi Hendrix live, saw Janis Joplin live. They were heavily into that rock genre. What they did for a living, and what I was always around, was San Francisco opera ballet. I was exposed to opera at an early age, or when I was born basically.

As far as Hedwig and Bat Out of Hell are concerned, I think that they marry these two lives that I had had before I did Hedwig. I had my theater life, but then I had my rock band. I would do musical theater in day, as my day job at night. Then, after the shows, I would rush down to the Lower East Side, and I’d do rock shows with my band. It was like leading this like double life for a minute. Then, with Hedwig, it all came together in one package that married musical theater so well with rock and roll, and classic rock too, like that Bowie vibe, that Iggy Pop vibe. That was pure wheelhouse for, me marrying the two. I get to do it again here, with Bat Out of Hell, where it’s not watered down.

You shared the stage with so many different Hedwigs over the course of your run in that show — from Neil Patrick Harris to Andrew Rannells to Darren Criss. What was that like?

It was really interesting, to be honest. When you build a show with someone, you have a really tight relationship with that person. When Neil was leaving and I was staying, I was kind of upset. I was like, “How can you leave me?” Then when Andrew came in, it was almost like, “I don’t want to change anything that I do.” I was at the mercy of each Hedwig, because whatever they do, I have to follow. That’s part of the gig — that you are their servant boy. If they change things up, you got to go with the flow. What I really learned, was after like a couple of weeks of acclimating to Andrew Rannells, who is the second one to come in, that bond, and that same relationship formed, where we were jiving. I was there for that, and I loved everything that they did. As each one came in, and there was this weird resistance to the new wife. Then, as time went by, we jived. Then, all of the fun stuff would start to happen, and it became a looser and more fun.

I ended up loving each and every one of my stars. Each and every one of my wives is so fun. Honestly, John Cameron Mitchell, he is Hedwig, so that was really intimidating to me. Because he wrote the thing, and because it is his show, he did whatever he wanted. I was at the mercy of him, and for some reason, he felt it necessary to try and get me to break and laugh every show, which is so hard, cause he so funny.