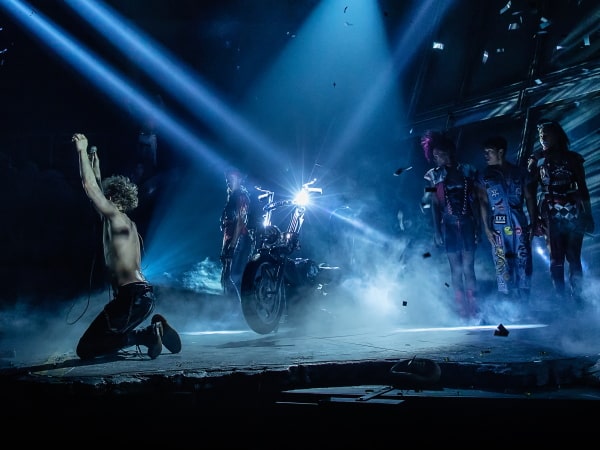 To determine if you will enjoy Bat Out of Hell, Jim Steinman’s explosive musical that’s blowing up the New York City Center stage for the next month, take this simple test. Does the simile, “We’re glowing like the metal on the edge of a knife” give you A) goosebumps, or B) nausea? For a certain generation, that sweltering image, and the song that encompasses it (“Paradise by the Dashboard Light”), was the ultimate adolescent aspirational anthem, a jokey double-dare of sex and commitment aimed at kids barely old enough to drive or to rock. Those willing to buy into such a grandiose, “we're gonna go all the way tonight” mindset will find much to love in this production which features Steinman’s aching music from the three “Bat Out of Hell” albums recorded by Meat Loaf between 1977 and 2006. It firmly rejects the sterile snippet niceties of the jukebox musical in favor of the entire-song bloodiness of a blistering rock opera.

Inventively staged by experimental director Jay Scheib, there is a decidedly cinematic feel to the proceedings. Probably because a lot of it is filmed. A huge screen occupies much of the overhead space and a camera operator (filmmaker Paulina Jurzec) roams the multi-level stage, live-streaming the more intimate, or hard to see from the balcony scenes, rendering them larger than life. Indeed, certain movies come to mind over the course of the evening. The fevered, lunatic energy of the outstanding cast smacks of The Rocky Horror Picture Show while the operatic scope of the score harkens to the film version of Tommy, especially when performed by Lena Hall, channelling her inner Ann Margaret as a desperate mother, and Andrew Polec going shirtless and swinging his mic like Roger Daltrey. As the motorcycle riding protagonist in charge of both the title song and the epic finale, “I’d Do Anything for Love,” the lean and crisp Polec is definitely more hot dog than Meat Loaf.

For a show rich in extremes, Steinman hangs them all upon some pretty conventional musical theater tropes. There are couples trying to connect and a family trying to unify. But most of all, there is, of all things, Peter Pan. Polec’s character, Strat, is the leader of a group of lost kids, mutants who can never grow older than age 18. Lest anyone miss the allusion, one of the flighty leaders of the group is named Tink (Avionce Hoyles). Strat falls for the sweet Raven (Christina Bennington), the daughter of a wealthy power couple, Falco and Sloane (Bradley Dean and Hall), who have romance problems of their own. To summarize the outcome in the words of the author, rock and roll dreams come through.

As written for the albums, many of Steinman’s songs involve a man addressing a woman, making them excellent fodder for staged duets. And there are some great ones here with breakout performances from both New York mainstays and newcomers alike. Hall and veteran showman Dean get the “Paradise by the Dashboard Light” honors and crush it, then top themselves with a stirring “What Part of My Body Hurts the Most.” And in her off-Broadway debut, British actor Danielle Steers nearly steals the show with her dynamic dancing and soulful rendition of “Two Out of Three Ain’t Bad,” sung alongside the fine Tyrick Wiltez Jones. In addition to the video screen, Jon Bausor’s set is booby trapped with confetti cannons and anchored by a soaring apartment tower that is in the shape of a guitar neck -- and glowing.