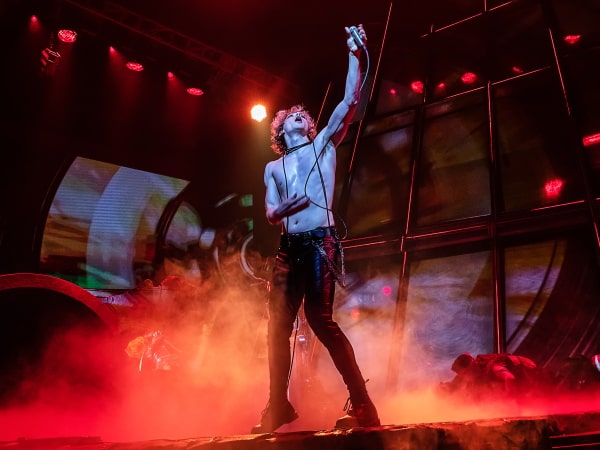 This musical, first performed in the UK in 2017, takes songs from Meat Loaf’s Bat out of Hell albums and slots them into a sexed-up version of the Peter Pan story set in a post-apocalyptic version of New York redubbed “Obsidian”. Like the albums, it’s a bizarre, over-the-top piece of pageantry that teeters on the edge of all-out mawkishness yet somehow keeps us rapt.

Much of the credit for that lies with Jay Scheib’s winningly loopy staging, which conjures the enigmatic aura of a David Lynch film by way of The Rocky Horror Picture Show (which featured Meat Loaf himself — here credited as an associate producer). Scheib crafts a series of arresting visual set pieces that blend the familiar elements of Meat Loaf’s world — guitars, motorbikes, leather jackets — with a perspective-skewed set (designed by Jon Bausor) reminiscent of 1920s German expressionist cinema. The emphatic, stadium-rock-meets-heavy-metal style of the music is duly offset by a mysterious, dreamlike ambience.

The links between Jim Steinman’s numbers and the action often seem a bit tenuous. Yet the strangeness of Scheib and Bausor’s vision makes it hard to avoid being swept up in this raunchy spectacle, where the principals intermittently shed their punky/glam rock costumes as they cavort about the stage in lusty pursuit of each other. The effect is campily operatic, much like Thomas Adès’s quasi-pornographic take on the life of the Duchess of Argyll in Powder Her Face, which Scheib directed in 2013.

Steinman and Meat Loaf’s own original Wagnerian aspirations also resonate here. As Falco, the mobbed-up overlord of Obsidian, Bradley Dean cuts a surprisingly Wotan-like figure — while also channelling some of Meat Loaf’s tongue-in-cheek bombast — as he struggles to prevent his teenage daughter Raven from absconding with Strat, the heart-throb leader of a gang of glamorous street kids eternally stuck at the age of 18 due to the effects of the “chemical wars”. As Strat, Andrew Polec combines the raw erotic power of a young Mick Jagger with a dash of Buddy Holly-esque ingenuousness. He and Christina Bennington, who plays Raven with a blend of vulnerability and livewire charm, are a hellishly good match. And both belt out their tunes with aplomb. Even that maudlin ballad “It’s All Coming Back to Me Now” sounds electric here.