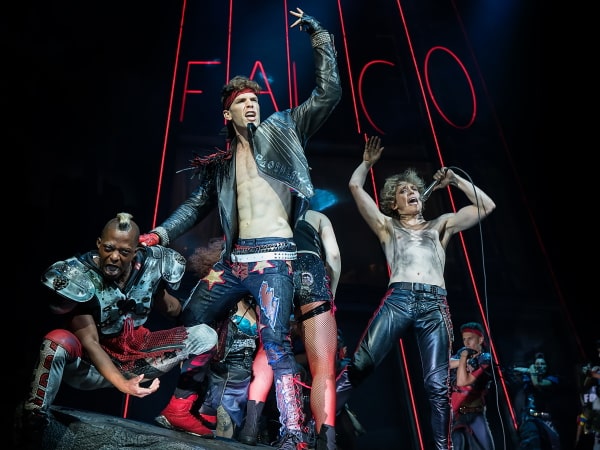 Let’s say you’re just a girl or just a boy on a hot summer night in a dark city street with a heart pumping blood and a soul spurting dreams and a profound investment in Meat Loaf’s back catalog.

Vroom into New York City Center. Jim Steinman’s “Bat Out of Hell: The Musical,” directed by Jay Scheib, which premiered at the Manchester Opera House in 2017 and then reopened in London’s West End, will meet you there with its engine gunned, its wheels mostly spinning, its tailpipe jammed with whatever passes for a plot.

Extravagant, absurd, compulsively hummable, “Bat Out of Hell” is, like its score, good-bad. Or bad-good. Having read the script — the morning after, auditory nerves still jangled — I now know that the supporting characters have names. And I can fill you in on what we’ll graciously call the story.

In the City of Obsidian, a post-apocalyptic Manhattan wrecked by the climate crisis and economic inequality, the teenage princess Raven (Christina Bennington) lives captive in a tower with her world-weary mother, Sloane (Lena Hall), and her tycoon father, Falco (Bradley Dean). (“Rock Me Amadeus” Falco? Maybe?)

Raven escapes one night and meets Strat (Andrew Polec), the leader of the Lost, a roving band of mutants, forever frozen at 18. Romeo and Juliet with eyeliner and power chords, these are star-crossed, fate-diddled lovers. If only they can make it till the morning — and the final duet.

Mr. Steinman, credited with the book, music and lyrics, has been working on this dystopian gloss on Peter Pan since his undergrad days, 50 years ago. How dystopian is it? Let’s just say that in this version, Tink (Avionce Hoyles) dies. Clap all you want, kids.

Like “Moulin Rouge!,” a rival jukebox musical playing 10 blocks south, the music, not the narrative, is the lure and the reward. Overblown, with hooks for days, Mr. Steinman’s songs have made two generations of teenagers feel nostalgic for a youth they were still experiencing. His imagery — stars, hearts, cars, fire, fever, ice — is wildly limited, his emotions bruisingly overripe, but if you make it to City Center you will find yourself surrounded by an audience trying not to sing along.

Those songs could be slotted in just about anywhere, provided you leave “I Would Do Anything for Love (But I Won’t Do That)” for the finale, which Mr. Steinman does. His writerly motto seems to be: “If you don’t go over the top, how are you going to see what’s on the other side?” At least that’s what he has his characters say. Twice. His book, a banquet laden with cheese, is predictably extravagant. Here is Strat’s Meat Loaf-scented pickup line: “On a hot summer night, would you offer your throat to the wolf with the red roses?” It helps if you deliver it shirtless. 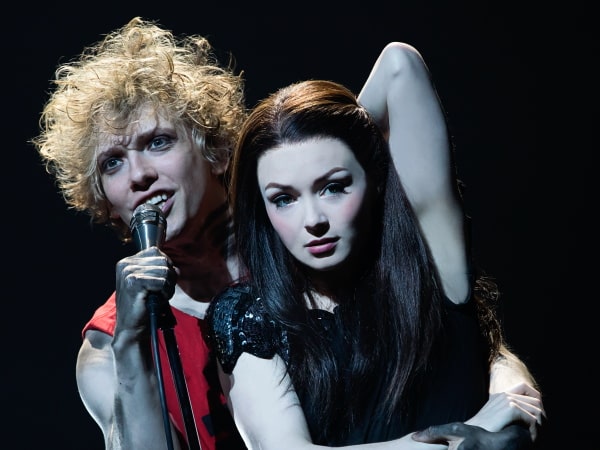 The staging — with an ’80s-inspired set, costumes by Jon Bausor and video design by Finn Ross that has already lowered my I.Q. — is a salacious mess, served lukewarm. A large screen dominates the space, its images supplied by a camera-wielding, pigtailed performer, Paulina Jurzec. The leering angles Mr. Scheib prefers and the way he encourages his performers to wriggle before the lens turns the cast into his cam girl.

A director mostly associated with avant-garde material, Mr. Scheib often makes works that feel unfinished. That’s true here. With little sense of circumstance or place, even the arrangement of bodies seems haphazard. Rock ’n’ roll needs disarray to sell its emotional authenticity, but Mr. Steinman has never favored authenticity when a crescendo would do.

The characters are little more than hot-bod ciphers, spattered with just enough personality to cue an intro to “Making Love Out of Nothing at All” or “Objects in the Rear View Mirror May Appear Closer Than They Are.” Mr. Polec lets his (excellent) hair do a lot of the acting for him, but his affable mania and nifty baritone complement Ms. Bennington’s stiletto soprano.

Mr. Dean, a Broadway veteran, serves pure Velveeta, scoring a solid triple with “Paradise by the Dashboard Light.” His partner, the Tony winner Ms. Hall, as Raven’s disaffected mother, approaches the material with a wink and a uvula-rattling belt. Her voice — rough and richly textured — feels like a sandpaper kiss. Danielle Steers, as Strat’s sidekick Zahara, crushes “Two Out of Three Ain’t Bad” with a seat-shaking, onyx-dark alto.

Their rock ’n’ roll dreams come through. Yours might, too. With a death-grip on the throttle and a snarl for the rules of the road, “Bat Out of Hell” is breaking a speed limit somewhere.