We've headed back into hell and it's HOT! 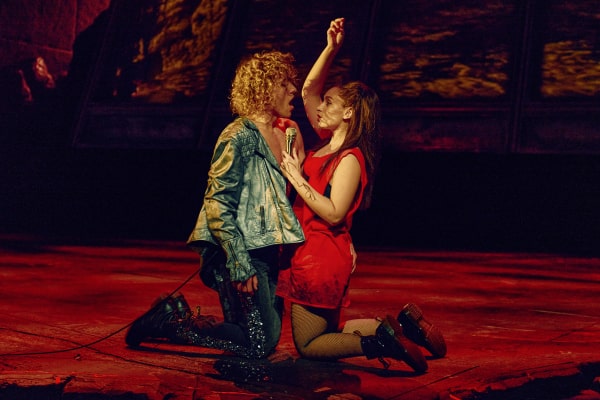 On September 11th, Jim Steinman's Bat Out of Hell the Musical hit the road running with a stellar new production set to tour the UK and Ireland through 2022.

After over two years since I last saw the show, I knew seeing it back in Manchester where it began four and a half years ago was going to be an emotional experience, and I was not disappointed.

Bat Out of Hell: The Musical is a post-apocalyptic rock and roll love story. Set in a dystopian future, the island of Manhattan; renamed Obsidian, has floated out to sea and is now under the reign of Falco (Rob Fowler); the tyrannical ruler set on ‘revitalizing’ the city. Living in the abandoned subway tunnels underneath the city are a group of genetically-altered teenagers, known as The Lost. When Strat (Glenn Adamson); the reckless, immortal leader, meets Falco’s sheltered daughter, Raven (Martha Kirby) on the eve of her eighteenth birthday, the stars align and they fall head first into the wonder of first love.

The production brings together a phenomenal new cast, as well as returning fan-favourite original cast members, Sharon Sexton and Rob Fowler to the roles of Sloane and Falco, respectively.

There were so many outstanding moments in this revisited production, I can hardly even begin to discuss them all. Martha Kirby's incredibly moving rendition of 'Heaven Can Wait' at the start of the second act gave me goosebumps, and Glenn Adamson's raw power right from the start was electric to watch on stage. Adamson really proved himself during the climax of 'Bat Out of Hell' at the end of the first act, met with an enthusiastic standing ovation from the audience. 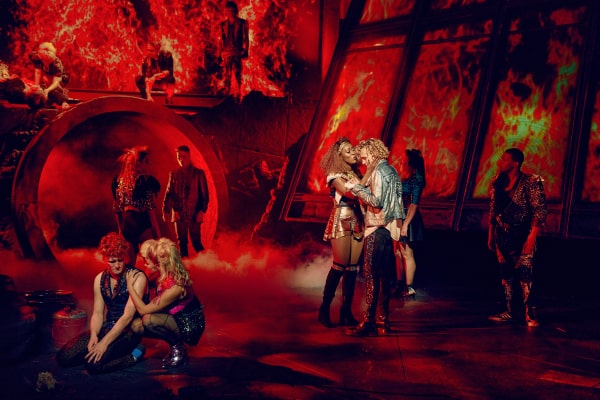 Another highlight was 'Objects In The Rearview Mirror' featuring James Chisholm (Jagwire), Kellie Gnauck (Valkyrie) and Danny Whelan (LeDoux), which brought me to tears. The raw performance really proved the strength of this entire cast. Joelle Moses (Zahara) really showed off her amazing voice in 'Two Out Of Three', which only got even better the second time around.

Killian Thomas Lefevre brought out a depth to the role of Tink, the youngest of the Lost, which made me feel so much for the character throughout the show. Not only their moments in the spotlight (though their 'Not Allowed To Love' was fantastic in itself!), but their reactions to the action on stage, especially during 'You Took The Words Right Out Of My Mouth' spoke so much to the characters' thoughts and actions throughout.

Taking over from a beloved cast, some who have since gone on to become some of the West End's biggest stars, can certainly be daunting, but this company of performers have absolutely knocked it out of the park. The cast breathes new life into these beloved characters, and shows a new side of them. Their passion for this show absolutely shines through in every scene, and it is truly infectious.

The UK & Ireland Tour of Bat Out of Hell - The Musical has direction by Jay Scheib, choreography adapted by Xena Gusthart, with musical supervision and additional arrangements by Michael Reed, set and costume design by Jon Bausor, video design by Finn Ross, lighting design by Patrick Woodroffe, sound design by Gareth Owen, and orchestration by Steve Sidwell.

As with any show, moving from a West End engagement to a touring production required some reworking on the set and effects. Gone is the on stage pool, the elaborate bar hidden behind the tower and the large moving sets for the living room and bedroom of Falco Towers. On the whole, these limitations were accounted for brilliantly. The quick change in the pool has been moved to land with a brilliant added reveal, and the clever use of the videography, in the bedroom scenes especially, drew the focus away from the limited set, and directly on to both the characters and the slightly dream-like tone of the scenes. The videography throughout the show has been tightened up more than ever, which really helped to showcase the cast - in particular Martha Kirby's acting.

Every production of this show has changed from the one previous to add its own flavour to the show, and this one is no exception. There were a couple of minor changes to the plot that seasoned 'Bat fans' will notice. In the interest of keeping this review spoiler free, I won't go into too much detail, but they mostly served to tighten up a few scenes, include a few more nods to past Jim Steinman works and add some much appreciated cheer when leaving the theatre. The one rather major change to how the plot plays out was a very welcome surprise. The addition of 'Good Girls Go To Heaven' as an encore after the curtain call was genius, and had the entire audience on their feet. After the song was sadly cut from the show after less than a week in 2017, seeing it performed live and by such incredible vocalists, was truly phenomenal.

This revived production is what Jim Steinman's music is all about: raw emotion, pure passion, and rock'n' roll.