Back in Manchester, where it all began, Bat Out of Hell has lost none of its verve, bringing the audience to their feet with sheer joy 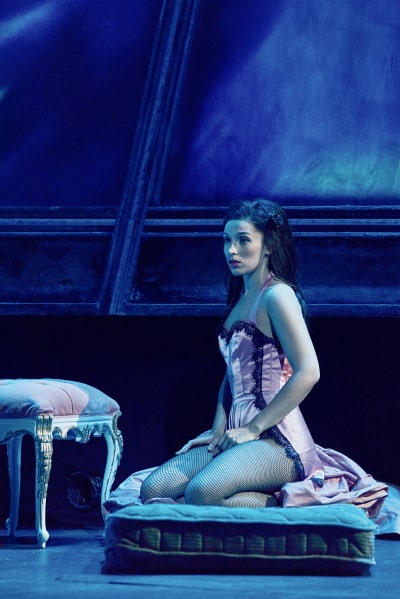 Bat Out of Hell The Musical was launched in Manchester in 2017, though it seems impossible to believe it was so long ago, as the drama and joy of the show remained brilliantly bright in our memories, guaranteeing we would be booking tickets again the moment it came back to town. That was, of course, planned for 2020, so didn’t happen. The delay has possibly only served to heighten the audience’s excitement and give the performers an extra boost – though with this show being so completely full-on, it’s hard to imagine if there’s even one more iota of themselves they could possibly give.

To summarise: Bat Out of Hell The Musical is a rock musical with music, lyrics and book by Jim Steinman, based on the Bat Out of Hell album by Meat Loaf. It's a spin on the story of Peter Pan, this time set in post-apocalyptic New York (Obsidian), and follows Strat, the forever young leader of 'The Lost', who has fallen in love with Raven, the 18-year-old daughter of Falco, ruler of Obsidian. It’s not a series of rock songs shoehorned into a storyline, this was always Steinman’s plan, it just took some time to bring to fruition.

There is teenage rebellion, wifely rebellion, fatherly fury, young love, motorbikes, and all of your favourite Bat Out of Hell songs, performed with almost breath-taking brilliance by a cast just bursting with intensity and physicality.

The talent on stage will blow you away. However, if it were a song battle of the sexes, the ladies would win, hands down. Raven, played by Martha Kirby, who only graduated from her stage school in 2019, is mind-blowingly good. Her voice just soars and soars, yet wraps itself around Steinman’s rock anthems as if they were written for her. On more than one occasion she has the audience crying out in delight as she reaches levels of brilliance rarely seen. Raven’s mother, Sloane, played by Sharon Sexton, one of only two original cast members on this UK tour, also hits those notes hard, causing the audience to cheer and clap as we were lifted higher and higher with her. There are moments when you hold your breath it’s so good.

This is not to say the males let the side down. Glenn Adamson takes the role of Strat and shakes every crazy, intense, nothing to lose, drop out of it, his renditions of Bat Out of Hell and I’d Do Anything for Love (But I Won’t Do That) absolutely on point. Rob Fowler (our other returning cast member) as Falco, Raven’s father, plays his role of villain to with ease, his powerful vocals giving rich depth to Steinman’s songs, and his comic timing creating a great double act with Sharon Sexton. Their version of Paradise by the Dashboard Light is a treat to be savoured.

It’s not all fast and furious, there are some beautiful moments with ballads sung to break your heart. The ensemble piece, Objects in the Rearview Mirror is stunningly beautiful, and Sloane and Falco’s duet, What Part of My Body Hurts the Most, is just wonderful.

The choreography, the songs, the set… I am running out of superlatives to describe this musical – suffice to say it lifts 100% of the audience out of their seats as it comes to a close, every one of whom left with a buzz in their soul.

If you want to know what a rock musical should look like, this is it – don't waste a moment, book your tickets now.