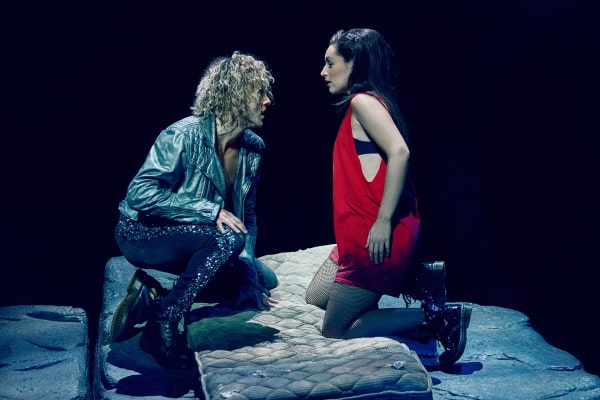 The West End has had a preponderance of two certain types of show over the last twenty years or so; musicals using either the back-catalogue of songs by a particular artist or popular Hollywood films turned into stage musicals. In the case of the former, it has often just been an excuse to draw in the particular artist’s fans, with a wafer thin plot and little to make the show memorable. An exception to this has been ‘Mamma Mia’, which has repeatedly proved itself to be very much a show in its own right, with well-drawn characters and effective use of the Abba classics, continuously winning new fans. Like 'Mamma Mia’, ‘Bat Out Of Hell’ is a genuine stand-out exception, four years on from its premier in Manchester and continuing to win world-wide acclaim.

’Bat Out Of Hell’ is a truly astonishing piece of theatre. Just the operatic majesty of Jim Steinman’s song, to quote a line from a Meatloaf song, ‘everything is bigger than everything else.’ Great, impressive staging, powerful multi-media effects, huge cast and over-the-top performances; this show has it all but most importantly, it is not just a production which has had a lot of money thrown at it to no effect; there is a genuine plot to the show and real characterisations.

A lot of thought clearly went to the conception of ‘Bat Out Of Hell’. The setting is an American city in a kind of dystopian world, echoing many of the blockbusters of the '80’s and '90’s (typically starring either Arnie Schwarzenegger or Sylvester Stallone), where there is a rich elite living in high-rise buildings and an underclass existing in poverty under the shadows of giant polluting factories; think of ‘The Running Man’ for example. This is the same era when Meatloaf was at the height of his career and we are living today around the time when many of these future looking movies were actually set (‘The Running Man’ was set in 2017 and ‘Terminator’ 2018, amongst many others!).

‘Bat Out Of Hell’, just like most of these films, maintains a careful balance between seriousness and comedy throughout. The world view is bleak and most of the relationships fraught but there is genuine comedy throughout, which at times is absolutely hilarious. This is just one of the many factors which sets this show apart from others of this genre.

‘Bat Out Of Hell’ has its own world view but the characterisations are timeless; there is something of the Romeo and Juliet regarding the central characters Strat and Raven’s relationship, but the girl’s parents Falco and Sloane’s marriage is also given careful attention and there are other important key characters in the story too. The songs are given full justice with a band featuring two guitarists and three keyboard players, but when sung by female characters in the context of the story, they take on added new meaning, Raven’s ‘Heaven Can Wait’ being a great example. There are other songs where numerous members of the cast sing alternate verses, such as with the show-stopping ‘I’d Do Anything For Love’, letting the emotion get carried over a number of different relationships.

There are several thrilling and genuine surprises in ‘Bat Out Of Hell’ and it can only be suggested that you just go and see the show, rather than any spoilers being given out. Aside from the powerful performances and incredible staging, there are frequent tight dancing scenes, which performed by young people to powerful moves, in an inner city setting give a genuine ‘West Side Story’ feel.

It was no surprise that ‘Bat Out Of Hell’ ended with a huge standing ovation and cheers as this is surely one of the most exciting and enjoyable shows you'll see anywhere.