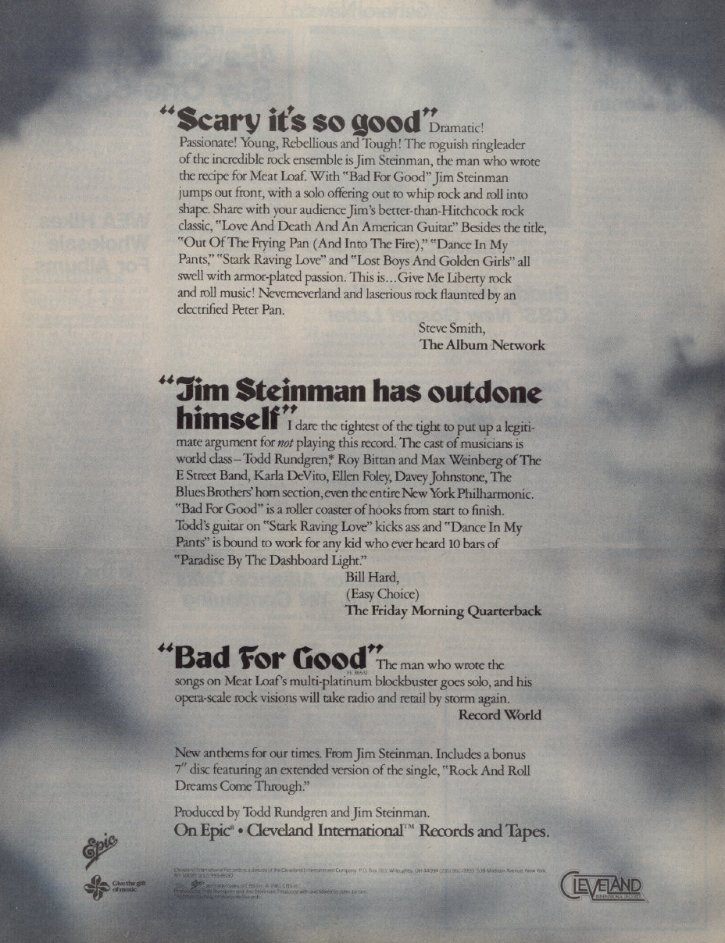 "Scary it's so good" Dramatic! Passionate! Young, Rebellious and Tough! The roguish ringleader of the incredible rock ensemble is Jim Steinman, the man who wrote the recipe for Meat loaf. With "Bad For Good" Jim Steinman jumps out from, with a solo offering out to whip rock and roll into shape. Share with your audience Jim's better-than-Hitchcock rock classic, "Love And Death And An American Guitar." Besides the title, "Out Of The Frying Pan (And Into The Fire)," "Dance In My Pants," "Stark Raving Love" and "Lost Boys And Golden Girls" all swell with armor-plated passion. This is...Give Me liberty rock and roll music! Nevemeverland and laserious rock flaunted by an electrified Peter Pan.

Jim Steinman has outdone himself" I dare the tightest of the tight to put up a legitimate argument for not playing this record. The cast of musicians is world class — Todd Rundgren,* Roy Bittan and Max Weinberg of The E Street Band, Karla DeVito, Ellen Foley, Davey Johnstone, The Blues Brothers horn section, even the entire New York Philharmonic. "Bad For Good" is a roller coaster of hooks from start to finish. Todd's guitar on "Stark Raving Love" kicks as and "Dance In My Pants" is bound to work for any kid who ever heard 10 bars of "Paradise By The Dashboard Light."

"Bad For Good" The man who wrote the songs on Meat Loaf's multi-platinum blockbuster goes solo, and his opera-scale rock visions will take radio and retail by storm again.

New anthems for our times. From Jim Steinman. Includes a bonus 7" disc featuring an extended version of the single, "Rock And Roll Dreams Come Through." Produced by Todd Rundgren and Jim Steinman. On Epic • Cleveland International™ Records and Tapes.