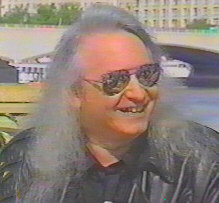 The Songwriter: Songwriter and producer Jim Steinman has worked with Meat Loaf and Celine Dion and has just written lyrics for Andrew Lloyd Webber's new musical, Whistle Down The Wind, which opens at London's Aldwych Theater on July 1. He is in his 40's and single. He talks to Lester Middlehurst.