Speaking as the professor in charge of the quest for the Meat Loaf/Jim Steinman gesamkunstwerk (being the first scribe in the UK to proclaim godlike status for the pair), I hearby declare that this offer does the near-impossible and lives up to four years' worth of anticipation and expectation.

Jim Steinman, author of all this fevered lust-rock, had to salvage the follow-up to 'Bat Out Of Hell' due to Meat's vocal collapse and release it as his own solo LP. Thus 'Renegade Angel' became 'Bad For Good,' and Meat's album was to be 'Rock 'n' Roll Dreams Come Through,' except at the last minute Jim took that anthemic swoon and stuck in on a free EP with his album. In those circumstances, the hopes for a worthy Meat Loaf part two seemed ever receding. 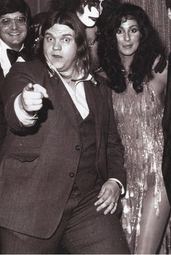 In such gloomy circumstances, joy to report then that the one persona that is the combined cortex rush of Meat and Jim has again triumphed in the face of adversity (no-one wanted 'Bat' originally, remember) to unleash another masterpiece of impassioned calculation (or calculated passion, if you prefer) in 'Dead Ringer.' Hitchcock and Smith of 'In Cold Blood' united to form a murderous unit, one unable to function in the absence of the other (catalyst and automation), and in their own way Steinman and Meat Loaf are killers, too.

Forget the four producers and hundreds of handpicked sessioneers, the two factors here are the voice and the compositions. Meat's deep resonance sounds more emotional than ever, like a bloodied fighter pulling himself up for a final magnificent effort, as if the enormous problems he's been wrestling with these past years have been to his ultimate benefit.

Steinman, likewise, seems to shadow Meat's mood by writing seven songs that are more personal than epic, mythic fantasy-panoramas of 'Bat' and 'Bad,' tunes that wring every possible drop of pain from him without forcing his voice into any dangerous territories.

'Peel Out,' the albums fist track and the most like 'Bat,' opens with a motorbike roar and a flush of Yardbirds guitar gunfire before soaring off into an unrestrained tale of highway anxiety and catchy riffing, all heady 70 millimeter stuff 'n' nonsense with plenty of Technicolor shades to boot. Booming piano chords lead into the thundering, sweating white soul ballad of 'I'm Gonna Love Her For Both Of Us,' which builds layer upon layer of baroque acoustic jangles and vocal harmonies until we're immersed in a hit single bubblebath full of frothy heartbeats and glittering prizes.

The side closes with the Steinman oldie showtune 'More Than You Deserve,' the song that Meat first auditioned for Steinman on Broadway. Sinatra could sing it, were it not for the heroine's rapidly mounting infidelity which has her making love to first one, then two, and finally a group of the singer's best friends. More than late-night radio deserves.

'I'll Kill You If You Don't Come Back' commences the flip, with hard rock posturing of a gritty magnificence only matched by Warren Zevon's current output. That is, a great K. Richards genre riff making it with ultra-sardonic lyrics: "How do you abuse me/Let me count the ways/How many hours and how many days."

A shattering noise gives way to a coda o benediction (reminds me of The Strawbs!) bestowed upon multitudes of young girls, Steinman showing genuine understanding of the trials of being a teenager struggling with the reconciliation between the desire for magic and the pain of real life. Sample lyrics: "Bless all the homecoming queens of the night/They're looking for magic in gymnasium lights." It's one of the greatest moments in pop song. Ever.

A titanic ballad follows: 'Read 'Em And Weep' is another of Steinman's cliché tunes, a dark fire torch song that ranks right up there with the Sammy Cahns of the world, and it takes a man of Meat's prowess to handle it.

A Steinman poem comes up. 'Nocturnal Pleasures' (originally titled 'Shadows On The Freeway' and written for an unreleased compilation LP called 'Los Angeles Radio') is another fine hallucination about golden girls and lost boys, in the same way that the cut next out, 'Dead Ringer For Love,' is a horn-arranged rock belter with boy/girl interplay like 'Paradise By The Dashboard Light' and 'Dance In My Pants.'

The closing 'Everything Is Permitted' (hi there Hassan I Sabbah, Dostoevsky, Bill Burroughs and Jim Carroll!) is a creepy, deadly nightshade love song that Aleister Crowley could dig. And suddenly it's all over, an album so good it seems to be about five minutes long.

'Dead Ringer' isn't heavy metal, it's just heavy. Meat and Jim's genius is that in a fragmented market they strike a universal chord. Let's hope it isn't four years till the next one.