Steinman, who penned Meat Loaf’s Bat Out Of Hell LP takes center stage on this originally intended for Meat Loaf follow-up. The LP is filled with passion, romanticism, sexual yearnings and drama, all conveyed in Steinman’s vivid imagery and surprising vocal flair. Roy Bittan and Max Weinberg of the E Street Band, vocalists Rory Dodd and Karla DeVito (who shared vocals with Meat Loaf on “Paradise By The Dashboard Light”) Rundgren, Ellen Foley and others contribute to the project. Steinman’s songs are like mini-novels with a good portion of them running seven minutes and over. Yet the pace remains intense throughout. 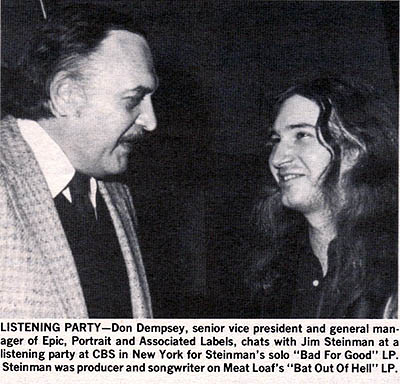 “What separates me from Meat Loaf is that my qualities are of the heroic ‘Star Wars’ effect. Sweeping and theatrical. Blood and thunder, iron and guts.”

So says Jim Steinman, author of Meat Loaf’s mega platinum “Bat Out Of Hell” LP, whose own debut album “Bad For Good” on Cleveland International/Epic was recently released.

Steinman, who again has written all the material for Meat Loaf’s long-awaited follow-up says the Meat Loaf album will be intentionally dissimilar from “Bat Out Of Hell” and “Bad For Good” expressing obvious concern that both LP’s wouldn’t conflict.

“My record follows the personality of “Bat Out Of Hell,” says Steinman. “Meat Loaf’s album are more personal love songs. My songs are darker and wilder, kind of thunder and lightening - like God hit the world and the world hit back.”

Steinman’s LP was originally intended to be Meat Loaf’s follow-up until it was time to lay down the vocals. It was then, says Steinman, that Meat Loaf opened his mouth and no sound came out.

“He went to see doctors, coaches, anyone associated with the human voice. It was 50% psychological having to follow-up a big album and the other half ripping his voice touring. He came back six months later and still couldn’t sing. It was a mental block. Those songs represented failure to him.”

So Steinman, who was going to record his own LP anyway, picked up the ball and recorded his own songs with Todd Rundgren producing.

As a result, Steinman juggled his own album with the writing of Meat Loaf’s LP, all the time tying to give both albums separate identities.

To the surprise of many, Steinman’s vocals sounded stronger than expected, unusual in as much as he hasn’t sung since 1973. He couldn’t sing for two years after that, the result of a broken nose sustained in a bar fight.

“I always liked singing more than writing,” he confesses. “I taught the songs to Meat Loaf. He became my voice. I used to sing Doors and Stones rockers in 1972. My voice is edgier and there’s a different texture to it. Drummer Max Weinberg describes it as sounding like ‘I have to go to the bathroom.’”

Surprisingly, Steinman grew up with opera, so one of his seven or eight minute epics “sounds like a jingle” to him when compared to a five-hour opera.

Steinman says that when writing songs he thinks of movies: “I make cinematic adventures with edits built in.”

He is currently writing “Neverland” for CBS films which he describes as a “rock and roll Peter Pan.”

Half of the songs on “Bad For Good” were actually written for it. “I’m into the idea of someone putting on the headphones and listening to a film,” he says.

Steinman admits that when working on “Bad For Good” he wanted each song to be of anthem like proportion, which explains the passionate, urgently charged personality of the music.

Included is a duet with Karla DeVito, reminiscent of her duet with Meat Loaf on “Paradise By The Dashboard Light.”

“It was part of the game plan,” says Steinman. “Karla is the link with “Bat Out Of Hell.” I wanted to see if I could do it again and take it farther.”

The release of Steinman’s LP has caused some confusion at the radio and retail level. “Some people thought of my record as Meat Loaf’s second LP. Stations expected it to be. They had to be told it wasn’t Meat Loaf. But you have to get the consumer to know the connection though.”

Steinman hints at a few possible dates with Rundgren and DeVito and then a tour with Meat Loaf where both albums will be incorporated. And then again, DeVito has her own LP due so there could even be a three-way tour.

Steinman intends to continue recording although he says this “is the end of the line for “Bat Out Of Hell” type material.”