Bonnie Tyler walked into a Columbia Records conference room with a smile brighter than the 3 1/2 carat ring on her finger. She had just been told that her new LP, "Faster Than the Speed of Night," had climbed 12 spots on the Billboard charts, and that her single, "Total Eclipse of the Heart," had done likewise.

"I'm ecstatic," said the 32 year old Welsh singer. It had been almost four years since she scored a chart hit with "Heartache." 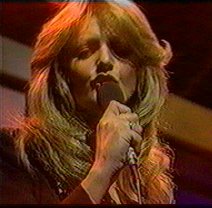 With her new album, Tyler has added a new producer (Jim Steinman, who's also worked with Meat Loaf), a new manager, and a new, fresh sound.

"Steinman is just great to work with," she said. "At first I asked him to produce my record and he turned me down. I wasn't too sure whether he was too busy, or just not interested in working with me."

Tyler waited awhile, and Steinman decided to give her a chance - on one condition. "He said he'd work with me," said Tyler, " only if we mutually agreed on the material."

Steinman invited Tyler to his New York City apartment to play a few songs for her. The singer's reaction was enthusiastic. "Jim's got this style of playing the piano that just about makes the floorboards cave in,"Tyler said. "The songs were fabulous."

In addition to the new material, Steinman and Tyler agreed on the Creedence Clearwater Revival standard, "Have You Ever Seen the Rain," as well as a song by Ian Hunter and Eric Bloom (Blue Oyster Cult), "Goin Thru the Motions," and a Bryan Adams tune, "Straight From the Heart."

Tyler's real problem was to escape categorization as a country music singer. "That's in the past," she laughed "I really had very little control of my career then. It was my management that tried to tell me what to do and what not to do. I realize now that they were wrong for me."

After a few years of fading away from the music scene ( and listening to about 400 cassette tapes of music), Tyler has come back with a new sound which portrays her as more of a tough woman than a western belle. "I realized that the country sort of music was wrong for me after a couple of bad gigs in America. It really inspired me to try something else."

Tyler decided to go back to her home in Wales. But keeping peace and quiet at home wasn't easy, since she wanted to get into shape for a new record.

"This energy came at me like a bolt of lightning," she recalled. " I had to try a new direction. One of my earlier albums was a total embarrassment. I didn't really care very much for the material, and I'm very excited about the new material."

" I also think I'm pretty good on stage." she mused. "I've always liked to wear tight pants on stage. I can't picture myself wearing a dress."

With the success of "Faster Than the Speed of Night" and her single " Total Eclipse," Tyler said about her renewed career: " I can't see myself doing anything else. I like it too much!"