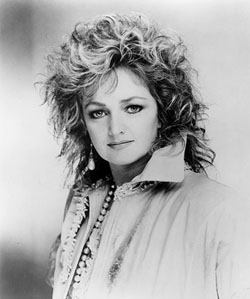 BONNIE TYLER: Hopefully, these two words are self-explanatory to most rock fans these days, with the Welsh girl fully recognized as a global music sensation. Her work in the past with Meatloaf's writer-producer Jim Steinman on the album known as Faster Than The Speed of Night also included members of Bruce Springsteen's E Street Band and the David Letterman (Paul Schaffer) band. Now Bonnie's collaboration with Steinman results in a new album, SECRET DREAMS AND FORBIDDEN FIRE, heralded by its first U.S. single “If You Were a Woman (and I Was a Man).”

It wasn't always so easy for Bonnie to command the roar of the crowd. Years ago, one could've been forgiven for asking, “Whatever happened to Bonnie Tyler?” or “Wasn't she the girl they dubbed 'the female Rod Stewart'?” Best known for “It's A Heartache” and “Lost In France,” the two sultry mid-'70s singles which both hit top 10 in the U.K. -“Heartache” hit RIAA gold at #3 in America - she unfortunately got tagged by the public as a mom 'n pop act, unfit for rockers, which didn't please her one bit. So when her old management contract expired in 1981, Bonnie chose a new route. She rejected the idea of re-signing and pursuing the country audience she'd won in America. She wanted to rock.

“I wanted to sing something more challenging,” she recalls. “I was completely on my own, and I just set out to get what I really wanted, which was to be able to choose songs from all different publishers. In the past I'd had no choice because my managers were also my producers and my songwriters.”

With a new manager in David Aspden, Bonnie decided to “go for the top” as she puts it and ask Steinman to take the helm of her 1st album for a new label, CBS. “I was fed up doing everything on the cheap,” says Bonnie, “go for the best and you might get it. At first Jim said no, but we didn't give up and kept sending him demos until he agreed.”

Faster Than the Speed of Night (May, 1983 U.S. release) was the result, featuring songs by Steinman himself, including the title tune and the massive single, “Total Eclipse of the Heart” which spent four weeks at #1 and passed RIAA gold to the verge of platinum that autumn. Classic material came from the pens of John Fogerty (“Have You Ever Seen the Rain?”); Bryan Adams (“Straight From the Heart”); Frankie Miller (“Tears”); and a raunchy version of Blue Oyster Cult's “Goin' Through the Motions” written by BOC's Eric Bloom and Ian Hunter of Mott the Hoople.

Musicians assembled for the sessions in New York City included drummer Max Weinberg and Steinman's co-arranger Roy Bittan on keyboards, both from the E Street Band; guitarist Rick Derringer; Larry Fast on synthesizers; and Jimmy Maelen on percussion; not to mention the Letterman house band on “It's a Jungle Out There.” It was all topped and commanded by Bonnie's throaty, roaring, sensual vocalizing. She was finally a real rocker with a platinum LP to her credit in the U.S., South Africa, Sweden, Australia, New Zealand and Switzerland. It hit gold in the U.K. and France, diamond in Norway, and silver in Denmark and Greece.

Not bad for this little girl who was raised just outside Swansea, Wales and started her career as a teenager singing six nights a week at local clubs. But she's never been the one to rest on her laurels; now the lull is over and the storm is about to break, and it's called SECRET DREAMS AND FORBIDDEN FIRE.

It began after a year or so of worldwide performing to promote the last LP, when Bonnie asked Steinman to producer her new album once again. He was tied up doing sound track work; she wisely decided to wait for him rather than break a winning team. Sessions began in March '85 at New York City's famed Power Station with Bittan and Weinberg signed on for the project once more. Guitarist Eddie Martinez provides some stunning work on Steinman's song “Rebel Without a Clue.”

And songwriting continues strong as ever. Desmond Child (of the band once known as Desmond Child & Rouge) contributed two compositions, “Lovers Again” and the aforementioned new single, “If You Were A Woman (And I Was a Man).” There's a new Bryan Adams/Jim Valance track, “No Way to Treat a Lady.” And Todd Rundgren duets with Bonnie on another Steinman number “Loving You's a Dirty Job But Somebody's Gotta Do It,” an earlier single release in England.

“It's a great album,” says Bonnie. “There's more keyboards on here, and there's a better selection of songs. They're more commercial, but they're not just pop ditties. It's punchy, a really raunchy album. There's 'Holding Out For a Hero' which Jim and Dean Pitchford wrote for the hit film Footloose; and a cover version of Freda Payne's 'Band of Gold', but with a 1986 treatment.”

And the LP was definitely worth waiting for. “Jim and I have been working on it for a long time, you know what he's like -- a perfectionist. And now I'm really thrilled with it, and everyone who's heard it thinks it's gonna be a monster!”

As the new album and single are unleashed, rehearsals get underway for a global tour to promote them, starting in the U.K. late-May. Bonnie and Jim are also teaming up again to work on videos for the album. “We really enjoy working together,” enthuses Bonnie.

Bonnie has her feet firmly on the ground and her roots remain at home, yet she knows she's arrived. “I was the 1st British female star to go straight onto the album charts at number one,” she reminds us. “I never get tired of all this. I like touring. I even do the promotional stuff that you don't really have to do. Now I get loads of fan letters from teenage girls. They want to know what kind of mousse I put on my hair!”

A sure sign-a star is born. Bonnie Tyler: self-explanatory.