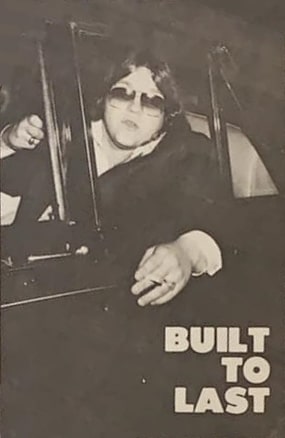 Before I enter Meat Loaf's apartment, there's a lady in the corridor putting finishing touches to an oil painting she's about to exhibit. It's obviously that sort of place, very flash and probably full of superstars of their trade.

Meat Loaf's recently moved there because at his last place he was being continually pestered by his fans.

He answers the door, dressed in jeans and a dressing gown and immediately shows me round, proud of his new acquisition. There's no furniture, apart from his prize possession, a hand built parquet table and four chairs. The only other thing that's been done is the decorating - one room in real chamois wallpaper.

He starts the interview by winding me up, answering questions that haven't been asked. And tells me about the films he's working on and the one he's just finished.

"Americathon" — which includes Elvis Costello — is the one just gone. It's set in 1998 and America has gone bankrupt, everybody lives in can but they don't run because there's no petrol. There's no houses and the White House is just one room and has moved to Long Beach, California. The USA is owned by this one character called Birdwater.

"He demands 400 billion dollars from the people to save it but in the process he sells San Diego to Mexico. So there's this kind of Olympic Games to raise the money, with weird competitions.

"I play a character called Oklahoma Roy Budnitz who has to fight a car in the games. They find one that's working and also a couple of gallons of petrol. It's a real gladiator fight. I wear a Captain America costume and, of course. after a tremendous battle. I blow up the car and win.

"There's a lot of other scenes, one where a mother goes in the boxing ring with her son, but in the end America is saved."

Fantasy is something the Loaf and Jim Steinman, composer, arranger and pianist of Meat Loaf's 'Bat Out Of Hell' album seem to revel in, because their next project together, which Steinman has written, is a film called 'Neverland'.

"It's futuristic version of Peter Pan. that takes place about 4,000 years from now," says the Loaf, "and I play Tinkerbell. We're talking about Roman Polanski to direct it. It's a pretty heavy film, that's the way Jim Steinman writes, sort of dark humour. It'll be a black comedy involving his fantasies. And CBS are backing it."

Does he intend to do more acting than singing?

"I've been more and more into films, but films and music are one of the same to me. They're all different but I love everything, the stage, films and records. If you get on stage, you know that all your energy can go into 2½ hours but a film you start early in the morning and finish late at night. So what you have is these 30 second spurts of energy and concentration and then you sit around for a while and do nothing. If you try to sit around for that amount of time trying to concentrate, you'll fall on your face. It's two different things, but you get the same buzz back."

So what about the next album?

"It'll probably be called 'Renegade Angel'. It's still vision to us. What we're trying to create is film and vinyl. So that you'll be able to sit and look at your speakers and watch pictures come out of them.

"Everybody thinks, that 'Bat Out Of Hell' was copied from Bruce Springsteen but it was copied from Alfred Hitchcock's 'Psycho'. So our whole thing is film. When I'm singing songs, I think of a roll of film running through my head."

He talks ten to the dozen, hardly taking a breath, switching from one thing to another. About how he and Jim Steinman will always work together but continue separate projects. The same with the rest of the band. The sex maiden, Karla, is even thinking of doing a solo album, "but they'll all get back together to finish off the album." said Meat Loaf. "It'll be the answer to 'Bat Out Of Hell'. Someone once described it as a teenager with a hard on and couldn't do anything about it. I like that description and in the 'Renegade' album he has his relief. 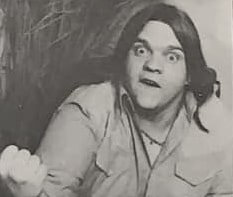 "It'll be a colder and darker album but it's tongue in cheek. It's serious but not, if you know what I mean."

"We'll probably be using the same guy that designed the last cover because he's so good. You give him an idea and he comes up with what you want."

See what I mean about him never stop talking. Still, we did only have 20 minutes together, he was obviously trying to get in as much as he could.

"We'll be working up to then, it never stops but Britain will be fit into our heavy schedule."

From a British point of view it seemed as though Meat Loaf burst onto the scene over night. I ask him if that was the case.

"We've also got to fit in some dates in America and Holland. They've just decided that it's the biggest thing there. The record has been No 1 for four weeks and in five weeks it's sold 400,000 copies. They've never seen anything like us. It should be about six months on the road, Canada, Japan, Australia, all over."

All this has happened in one year for the fat man. He claims to be the biggest selling American artist this year. One thing he likes to do is to keep a check on everything that's happening on him. He's obviously got a mini computer in that belly of his.

"I do keep a tab on things. I've got to, but I also employ people to do that for me. But if something's going wrong, I can sort it out. I can also keep a check on which radio stations are playing my records. I know the numbers of those stations and who works there and If I need a push in a weak area, I call them up. In America the radio stations don't know what they're doing — one minute It's disco, and then it's something else. I feel sorry for the newer bands. they're having a hell of a time trying to get their records played."

So the computer carries on. Giving me the lowdown on all of America's radio stations. I think he would continue all day but he's got a meeting to go to. He says goodbye and hopes he can see the interview in the Daily Mirror soon.

Oops, should I tell him? See, he knows that he wants to get to a huge market. He should worry, Britain has been conquered. Just look where his single is this week.