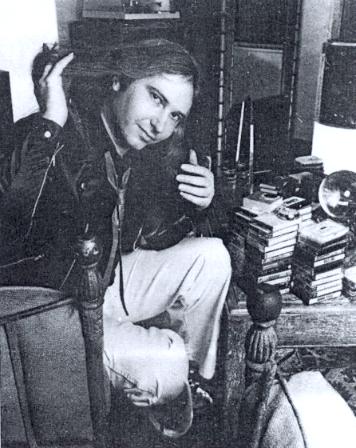 Jim Steinman can recall three transcendent moments in his life - like flashes of light, they were so clear. Meeting Barry Manilow was not one of them. "One was Bruce Springsteen at the Bottom Line, one was the Who the first time they did 'Tommy' at the Filmore, and the third was seeing the Wagnerian opera 'Tristan And Isolde' at the Met right across the street there." Steinman brushes his hair past his shoulders and gestures out the window of his Manhattan high-rise apartment, where audio-visual equipment vies for floor space with cabinets of vintage wine.

"I never separate the three," he emphasizes. "They always seemed equal in the ecstasy they produced. I've never forgotten Bruce, how inspiring that was. The thing that was so thrilling was that it was so operatic. I still think that somehow, underneath it all, people miss that."

Thanks to Steinman, they don't have to anymore. The mid-thirty-ish mondo-rock avatar, best known as the man behind Meat Loaf's 8 million-selling monster, 'Bat Out Of Hell,' has returned with a vengeance, in the unlikely guise of middle-of-the-road maestro. In the past year, the man who once fronted a band called The Clitoris That Thought It Was A Puppy has served as a writer and producer of Bonnie Tyler's 'Total Eclipse Of The Heart' (a Number One smash), Air Supply's 'Making Love Out Of Nothing At All' (Number Two) and - would you believe - Barry Manilow's latest, 'Read 'Em And Weep.' If high Sturm und Drang is what the people want on their radios, then Steinman's giving it to them in spades.

"Wait'll you hear my Lainie Kazan record!" Steinman kids. Still, isn't it just a bit strange that the man behind Meat Loaf has suddenly become the king of MOR singledom? "Yeah. There's a perverse attraction to some of these things I'm doing. I know when Meat Loaf heard about it, I was told he said, 'Steinman's producing Air Supply? That goes against everything he lives for!'

His latest singles are characterized by the same aural overload that first wrapped itself around America's ears with 'Paradise By The Dashboard Light' and 'Two Out Of Three Ain't Bad': string sections, woodwinds, brass and more backup vocalists than an unemployment office. Steinman, an avid reader of his own (mostly negative) press, gleefully recites the labels given his music: Spectorian, Wagnerian, bombastic. "My favorite is the Los Angeles Times, which said 'breathtakingly excessive.' That's as concise as could be.

"I've always found it hard for people to deal with things that are heightened or stylized, especially in rock 'n' roll. I don't see why you can't have Federico Fellini's rock 'n' roll as well as Martin Scorsese's." But while critical response may remain negative, the popular reaction to his recent efforts has been a very different thing.

"It was mind-boggling," gasps Steinman. "I woke up one day, and 'Total Eclipse' and 'Making Love Out Of Nothing At All' were Number One and Number Two together, for four weeks in a row."

His recent chart successes are the culmination of a long and eminently entertaining road. Raised on Long Island, Steinman first launched his brand of aural assault on the public while he was a student at Amherst college, where he wrote and directed a rock musical titled 'Dream Engine' as an independent-study project. The show baffled his professors but attracted the attention of Joseph Papp at the New York Public Theater.

According to Steinman, Papp was interested in touring the show around to various venues. Paul Rothchild, producer of the Doors, was eager to oversee the cast album. Toward that end, an audition with Warner/Reprise Records was set up for Steinman in Los Angeles.

"Rothchild was all excited," Steinman remembers. "He said, 'I gonna take this to Warner Bros., and it's carte blanche.' So we got this audition for Lenny Waronker. It turns out that they've got the entire staff of Warner/Reprise in a big airline hangar they have out there in Burbank, one of those places where Frank Sinatra used to record. I don't think they realized it was only gonna be me and two other people from the school and a piano, just like a theatrical audition."

"This is, like, '72, when Warner/Reprise was really the folk-rock label: James Taylor, Joni Mitchell, that was their image. And my opening number was a song called 'How Do You Bury The Skull Of Your Country?' The second song was called 'You've Got To Love Me With The Sun In Your Eyes Until The Day That You Go Blind.' It went on from there. You could just see the horror on their faces. Finally, one guy got up and said, 'I have to say this bluntly. We don't need people like you in the world.'

"So they turned down the album, and Rothchild calls me up and says, 'You really let me down, Steinman. You rushed the tempos.'"

Steinman, still in contact with Papp, returned to New York and became involved in a Public Theater musical written by Michael Weller ('Moonchildren', 'Loose Ends') titled 'More Than You Deserve.' The show was a chaotic flop, but along the way Steinman met up with one Marvin Lee Aday, "this big Southern kid who sang gospel music and Dobie Gray was his idol." Aday turned out to be Meat Loaf, and after the collapse of 'More Than You Deserve,' the two resolved to remain a performing pair.

After doing a 'National Lampoon' tour, Steinman and Loaf made the rounds. Negotiations with more than twenty record companies led to 'Bat Out Of Hell's release on Epic's Cleveland International label. By the end of '78, the LP had gone double platinum.

Steinman played keyboards for the first part of the tour but left in early 1979 to write songs for the follow-up to 'Bat Out Of Hell.' But Meat Loaf had trashed his voice on tour and was unable to sing any of Steinman's compositions.

Loaf took the year off to recuperate, and in 1980 he tried again. No go. At Meat's request, Steinman wrote new songs for him, songs that eventually appeared on the misbegotten 'Dead Ringer.' In the process, Steinman decided to use the old songs he'd written for Meat Loaf for a solo album of his own titled 'Bad For Good.' The album did stupendously in England and Europe but bombed in the States.

Before long, though, things with Meat Loaf turned ugly. Steinman became embroiled in a thicket of lawsuits against Loaf, who eventually declared bankruptcy. "A ton of money disappeared," Steinman notes wryly.

Before okaying a settlement a few months back, Steinman licked his wounds by penning a screenplay and hanging loose - and turned down an offer to produce Tyler. But he got so sick of being typecast as "the Dr. Frankenstein that created the Meat Loaf character" that a few months later, he changed his mind.

Steinman says he wrote 'Total Eclipse Of The Heart' primarily "as a showpiece for her voice. I never thought it would be a single. But it hit me later on." The single hit Number One in England last spring, but wasn't released stateside until the summer.

Thanks to that success, Steinman has been swamped with production offers. "They want me to do Black Sabbath," he says, grinning, "and I want to do it, because the idea of doing Barry Manilow and Black Sabbath in a five-month period is so cool." For now, though, he's taking up the new Asia album and Rick Springfield's next LP. "I still feel that what I do best is directing; I'm convinced that in five years, I'll be directing films, because that's what I always felt I should be doing. And I feel like it's me singing these songs, even though it's Bonnie Tyler or Air Supply."

So what is a Jim Steinman song, after all? " They're gas guzzlers," he says with a laugh. "That movie 'Christine' is out, and everyone can see the killer car. That's my songs. The kind of songs that when you finish the record and go to sleep, that record, at night, all by itself, gets up, puts itself on the turntable and just turns the vinyl until it distorts and feeds back and explodes."