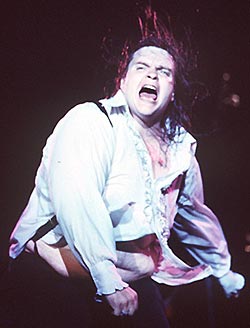 There are two constants in rock and roll. One is the teenager lament as fodder for every pop song recorded since the flood. The other being that each and every interpreter of said songs must have the physical dimensions of a pencil.

What? You thought that being skinny was just a fad started by Peter Framptron? Hell! Everybody from Mario Lanza forward knew the value of malnutrition as that first rung up the ladder of stardom. But alas, it seems that even these sacred cows are a thing of the past as, at a recent Roxy show, I saw a demented Figaro do an operatic rock stomp on a whole club full of security blankets. The culprit in this crime against nature was a rather bulbous elf called Meat Loaf.

Still, for all his gall, it was next to impossible to fault the guy. Here was this rotund whirling dervish belting out cosmic word pictures that turned the cliches of boy meets girl into some kind of lyrical alliance with the gods. Forget about standing in line for Star Wars! This was the true cultural event! A piano interlude pushed the spotlight over to Jim Steinman, the songwriting Jekyll to Meat Loaf's Hyde. Steinman, one of the few Clairemont, California, natives that lived, forges his literary thunderbolts in a hothouse of overheated imagery. So what if Zeus wasn't nearsighted. With or without glasses, Steinman is easily at one with the heavens.

Talking to Meat Loaf the following afternoon about the fact that his show was probably the closest thing yet to true rock/opera weighed heavily on my head. And so it seemed the logical place to start. "Yeah, the music has a lot of elements of opera to it. It's not just three minutes of guitar with some mundane words thrown in. It's a free and unstructured type of music that allows me room o do all kinds of things. Straight ahead rock and roll pretty much telegraphs its one emotional punch. Because what I'm doing borrows from so many influences and allows for so much improvisation on my part as well as the band's, the audience is open to any number of emotional highs and lows."

Typical of this interpretive roller coaster ride is the song "Paradise By The Dashboard Light," a bizarre odyssey that takes the teenage courtship rites to a dramatic level not unlike the finer moments of Madame Butterfly. Highlighting the piece is a mid-song dialogue between Meat Loaf and singer Karla DeVito that runs the gamut from tragedy to comedy. Meat Loaf remarked as to the importance of other characters in his rock and roll theatre in the round.

"I relate to all songs in terms of playing off different characters. I create a different character for each song that I sing. Each song demands a different emotional level so I come up with somebody suitable for the song's situation and I sing to them. Sometimes, in songs like "Paradise," the character is already there. But most of the time it's a matter of creating your own.

"What a lot of people don't realize is that what I'm doing is theatre of a kind and because it is theatre I take my responses from other people on the stage as opposed to the people in the audience. When I'm up there screaming my head off or pacing the stage, I'm looking for somebody to bounce something off me that will push the song to a higher dramatic level. It could be anything. My guitar player could break off a tasty solo or Jim might make a face. It's all part of taking a song to a different space each time its played." Meat Loaf's present state of musical mind is not something that just happened. It is but the latest bend in a long and winding road. Born and raised in Dallas, Meat Loaf teethed n such diverse musical morsels as the Kingston Trio and Mahalia Jackson before taking his powerful vocals on the road in pursuit of singing gold. His tendency toward singing excess brought him in contact with an equally rabid Ted Nugent and the result was that Mr. Loaf did lead vocals on two cuts on Ted's "Free For All" album.

Quickly recovering from this sudden surge of notoriety, Meat next put his girth and tonsils to work as the brain damages 50s reject Eddie in the Rock Horror Picture Show. Following this tour de force, Meat Loaf opted for more insanity with the National Lampoon Show. And it was on this fateful gig that the brain of Jim Steinman and the brawn of Meat Loaf hooked up.

The pair's mutual interest in supernatural longhair music soon attracted the production interest of one Todd Rundgren, a singer/songwriter in his own rite whose esoteric prose is said to have been learned from a mail order course from the University of Mars. The result of this unholy alliance emerged late last year as a big black disc with a small round hole. Behold! A "Bat Out Of Hell!"

All of which brings us rather abruptly back to the present and Meat Loaf's loose description of the havoc he reaps on stage each night.

"Most of what goes on is improvisation. When I go on stage I have only six things planned. I know I'm going on stage. I'm going to move to one side of the mike and then the other. I'll pace at some point. I'll hand the mike to somebody and I'll take off my coat. The rest of what the audience sees is strictly off the wall. Sometimes the band doesn't even know what I'm going to do.

"It takes a lot to extend yourself emotionally on stage the way I do. Doing my show is like standing nude in front of a thousand people. In terms of the honesty I put into a performance there's no way I can be anymore exposed that I am."

Meat Loaf punctuated the sentence by wiping a drop of sweat from his brow. Seven interviews in six hours seemed about ready to take their toll on the big man. But the question of describing his music revved him up for one last hurrah.