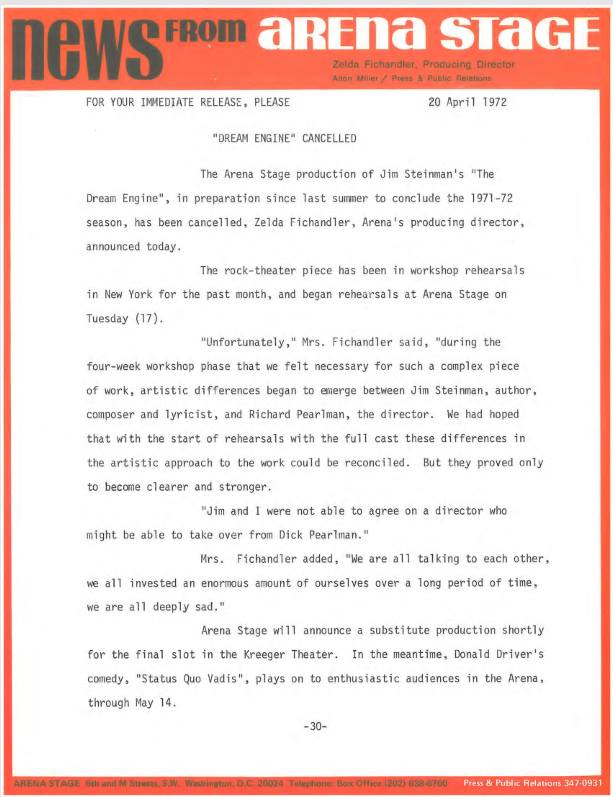 The Arena Stage production of Jim Steinman's “The Dream Engine”, in preparation since last summer to conclude the 1971-72 season, has been cancelled, Zelda Fichandler, Arena's producing director, announced today.

“Unfortunately,” Mrs. Fichandler said, “during the four-week workshop phase that we felt necessary for such a complex piece of work, artistic differences began to emerge between Jim Steinman, author, composer and lyricist, and Richard Pearlman, the director. We had hoped that with the start of rehearsals with the full cast these differences in artistic approach to the work could be reconciled. But they proved only to become clearer and stronger.

“Jim and I were not able to agree on a director who might be able to take over from Dick Pearlman.”

Mrs. Fichandler added, “We are all talking to each other, we all invested an enormous amount of ourselves over a long period of time, we are all depply sad.”

Arena Stage will announce a substitute production shortly for the final slot in the Kreeger Theater. In the meantime, Donald Driver's comedy, “Status Quo Vadis”, plays on to enthusiastic audiences in the Arena, through May 14.