His hair may be prematurely gray at 31, but Jim Steinman hasn't lost the passion of youth. In fact, he's probably the biggest booster the American teenager could have.

"Oh yeah, I love teenagers," he says in a suitably boyish voice. "I feel more alive when I'm around kids. I get really bored with adults." 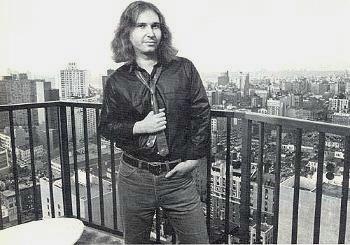 Steinman, in a blue shirt and red tie, flops into a chair in his New York apartment, cluttered with tape cassettes and plants. (The previous tenant was Gene Simmons - a "Kiss" pinball machine remains as a memento, or perhaps back rent.) Bad For Good (Cleveland International), begun nearly four years ago as the successor to his double-platinum collaboration with singer Meat Loaf, Bat Out Of Hell, has just been released - finally. After fixing himself a drink, Steinman details the circumstances that turned it into a solo venture.

"Meat tried to sing the songs, but had vocal problems. So he took time off to work with doctors and vocal coaches. He tried again and still had problems singing, and he was feeling so much pressure that when the movie Roadie came along [in which Meat starred as beer-guzzling Travis W. Redfish], he did it just to get his mind off things." In the interim, Steinman continued to write songs and also scored the film A Small Circle Of Friends.

When the 265-pound vocalist did return to the studio, he found that the trauma of trying to record Steinman's original batch of songs had left him with a mental block that prevented him from performing the material, and so the decision was made that Steinman would complete Bad For Good on his own (with Todd Rundgren co-producing) and pen a new set for his partner. It actually worked out better that way, he says. 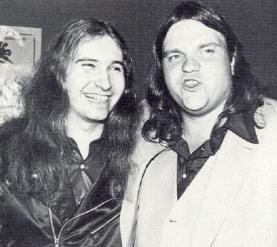 The great similarities between both records - vivid, cinematic imagery; immense, almost symphonic instrumentation, and grand, oratorical vocals that make it sound as if Steinman has only until the end of side two to live - exist because it was Jim who taught Bat Out Of Hell to Meat. While the large Loaf garnered the public attention, songwriter Steinman remained largely in the background, another reason he's happy with he way things turned out.

With more adolescent characteristics than an Annette Funicello flick, Bad For Good restates several standard Steinman themes. "Dance In My Pants" pits boy against girl on the dance floor instead of by the dashboard light, but the agony and ecstasy are the same. As on Bat, the songs boast an anthemic quality, a description that pleases Steinman.

"They get called that a lot, which I think is a great compliment. I've always thought that teen anthems were the essence of what rock should be. I base my writing on the theory that a teenager, more than anybody else, lives in a constant state of feverishness. Teenagers represent the height of love and lust, anything that's really strong, that goes right to the edge." Steinman takes everything to the limit on Bad For Good, which is not always good. Much of the music could be considered bombastic.

"But rock is best when it's bombastic," is his reply. "To me, the best songs always make you want to stand up and salute. That's why Chuck Berry is a great politician. And Elvis: the greatest President never elected." He reels off his other favorites: Bruce Springsteen, the Beatles, the Doors and especially the Who. "Pete Townshend is my idol, because he writes about wanting to remain a teenager and not being able to, and the friction that results." Sounds like Peter Pan.

"Oh yeah, Peter Pan is the ultimate rock story, because it's about lost boys who never grow up. ["Lost Boys and Golden Girls" is a Steinman song title.] In fact, as I found out when we shared the same studio, Springsteen loves Peter Pan, too: In "Born To Run" the girl's name is Wendy [heroine of the James M. Barrie children's drama written in 1904], which is no accident.

Surprisingly, few of Steinman's story lines come from his own youth, spent in California and Long Island. "I was so wiped out most of the time," he recalls with a laugh, "that I never fully understood what was going on, how much fun I could have had."

While attending Amherst College in Massachusetts, Steinman began writing musicals (his original ambition) and met Meat Loaf in 1973 when he was casting a play called More Than You Deserve. One of the songs he wrote for that play appears on the forthcoming Meat Loaf LP, and Steinman promises that the two will team again, both on record and on stage.

Steinman is asked if he, like Peter Pan, will always cling to the teenage world and write only about the pangs of youth. Is it possible he'll do an album 40 years from now called Old Bat Out Of Hell? After two records of desperation and lust, what will he write about next?

For Steinman, the answer's easy: "More desperation and lust! It's a theme that will never wear out."