Meat Loaf, the largest and maybe loudest singer in rock & roll, has been crying. He cried when his new album, Bat Out of Hell II: Back Into Hell, debuted way up at No. 3. He cried when the album's first single, "I'll Do Anything for Love (But I Won't Do That)," hit No. 9 last week. And he cried when his record company, MCA, "gave me a Babe Ruth autograph I've been wanting for 14 years. My wife and I both cried." 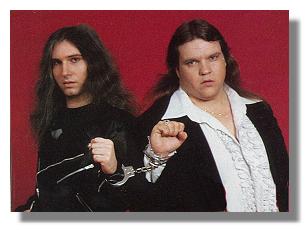 The flood of tears is, perhaps, justified. Until the album was released last month, Meat Loaf was known primarily for one thing: Bat Out of Hell, the legendary album he released on Cleveland Internation- al in 1977, when he weighed close to 300 pounds. Sure, he had a few movie roles, most notably in 1975's The Rocky Horror Picture Show, where he was chopped up and served for dinner. But essentially Meat Loaf was the Bat Out of Hell guy who wailed those overcharged songs of teen love and lust, symphonic mini-dramas, like "Paradise by the Dashboard Light."

But in 1981, when his follow-up, Dead Ringer, had plainly stiffed, critics taunted him, in one memorable phrase, as "the heftiest footnote in rock history." No wonder he now weeps: His current success might be the greatest and least likely musical comeback since Mozart leaped back into the public eye with Amadeus.

In retrospect, those critical bashings seem a little cruel, since Meat Loaf (who was born Marvin Lee Aday 45 years ago and got his nickname when he was a 240-pound seventh grader) was suffering more than a sophomore slump. A list of his woes during the '80s: *He lost his voice. No, he faked losing his voice (when he felt the original follow-up to Bat Out of Hell-prior to Dead Ringer-had gotten out of his control). Then he did lose it, psychosomatically.

*He broke up with his collaborator, Jim Steinman, the songwriter, arranger, and mastermind who created the improbable fusion of Wagner and teenage pop that made Bat Out of Hell unforgettable.

*He went bankrupt, partly because he got embroiled in 22 separate lawsuits with his music publisher, manager, and others, totaling $85 million. Since 1980, says Steinman, neither he nor Meat Loaf has seen 1 cent of what ought to be gigantic artists' royalties from the first Bat Out of Hell. 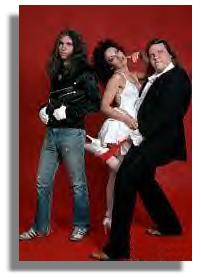 Meat Loaf prefers not to talk about his descent into career hell-"It's not really what I want to dwell on," he says. But for Steinman, his partner's collapse "was like being at the scene of a traffic accident. I wanted to work. He was frozen. It's one of the strangest, most surreal things I've ever encountered."

Working without Steinman, Meat Loaf cranked out a series of quickly disregarded records, including one concocted in Europe by Frank Farian, the producer later notorious for creating Milli Vanilli. He lived quietly in western Connecticut with his wife, Leslie, and their two daughters, Amanda (now 18) and Pearl (12). Slimmed down to a positively svelte 239, he coached sports, including junior-varsity girls' softball at a local high school, working as a volunteer after Connecticut's education budget got slashed.

But he still had an audience. Bat Out of Hell was selling up to a million copies a year and, with more than 25 million sold worldwide, had taken its place as one of the most popular albums in rock history. In 1988 Meat Loaf put a band together, played a bar in Chicago, and never looked back. "I had no ego about it," he says. "I didn't think I was working myself back." He and the band have since played 500 shows, "going from town to town, laughing like a Judy Garland-Mickey Rooney movie, totally invisible to the media but not to the public." 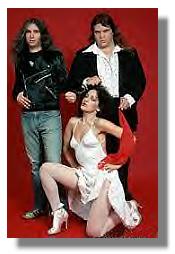 Steinman can't remember who called whom, but the two former collaborators, who hadn't exchanged so much as a Christmas card since 1981, ended up at Steinman's house in Putnam County, N.Y., one night in 1989, singing Bat Out of Hell. Two years later, they embarked on the album they inevitably called Bat Out of Hell II, re-creating a musical world that Steinman describes as "1890s Germany, if they'd had Marshall amps." He calls Meat Loaf "a gargoyle beast with elements of Jackie Gleason and Homer Simpson."

The hard part, however, was selling this old world in a musical era when even the greatest classic-rock gods have retreated-if not into history, then at least into MTV Unplugged.

"I faced tremendous skepticism," says Al Teller, chairman of the MCA Music Entertainment Group, who wanted to sign Meat Loaf and Steinman the moment he heard they'd reunited. "The conventional  wisdom was, 'Are these guys kidding?'" To counter the doubters, MCA marketed the new album in what Teller calls a "methodical, exhaustive" way, approaching decision makers at radio stations, record stores, and MTV months (instead of weeks) before release. Often, Meat Loaf himself went along to clinch the deal.

MCA's efforts paid off: Bat Out of Hell II has established itself as a genuine phenomenon by appealing to an audience that ranges all the way from thrash-metal teens to nostalgic baby boomers. In its first week of release, it sold 147,600 copies-barely 1,000 fewer than the new Mariah Carey album.

Despite the tears Meat Loaf shed on both sides of success, he is not impressed with his comeback. "I mean, it's good," he says. "I'm very grateful. But when I look out the windows of my big limo, I see the homeless in the park, and I think what I do isn't important. I don't want to get caught up in my career. The way I feel, that and $2.25 will get me an iced cappuccino." At least it's something to cry in.

Sixteen years have passed since Meat Loaf's Bat Out of Hell captured the hearts and groins of suburban teens, and it seems to take nearly that long to plow through the interminable Bat Out of Hell II: Back into Hell (MCA). It's easy to see why Meat would want to recapture the spirit and sound of his only hit album. And recapture it he and original producer-songwriter Jim Steinman have. They're all back: Meat's stentorian throat, the glistening pianos, the boardwalk-opera bombast, the endless song titles ("Objects in the Rear View Mirror May Appear Closer Than They Are," a line that isn't as amusing since Jurassic Park came out), and the songs about girls, getting cheated by life, and, of course, the awe-inspiring power of rock & roll salvation! Aside from lyric references to being "politically correct" and colorization, the record could easily have been made in 1978.

For all its overwrought qualities, the original Bat Out of Hell did have some context. It was the proud last gasp of a style of innocent, '60s-anchored pop before the tartan hordes of punk and new wave came tramping down. Bat II could have had a similar relevance to the post-boomer audience that came of age with the first album. At moments-like the relatively restrained ballad "It Just Won't Quit"-Bat II addresses those anxieties, if obliquely, and it's almost touching. Too bad most of the album finds Meat extolling "sex and drums and rock & roll." Beneath the music's high-cholesterol bulk, there's a sad, autumnal heart beating.