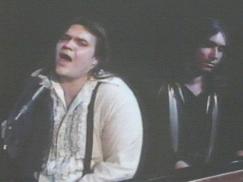 Yeee, ha. Let's forget all these limp wristed Travolta types and get a bit of beef into the act.

Meat Loaf is a thrombosis defying American Demis Roussos (except the music's got balls). Ever seen an elephant jump in the air, or a rhino do a somersault? Take a look at Meat Loaf and you get an idea of how it should be. His true destiny of maniac entertainer has been realized since he met Jim Steinman. The American success of Meat Loaf's 'Bat Out Of Hell' has been phenomenal, considering some of the prejudice it's had to overcome. Many West Coast stations don't like it, because it upsets the mellow airs of Fleetwood Mac and the Eagles.

A hotel room in Manchester. Mr. Loaf spreads his vast girth over a creaking sofa before his British debut at the Apollo.

"Is my weight a problem? Hell, I could outrun you."

Actually he isn't fat in the Demis Roussos bubbling way. There's lots of muscle under that girth and if you tangled with him he'd reduce you to a pile of mush. He's as positive as he looks, tongue lashing some American music.

"Listening to Fleetwood Mac is like taking something from a refrigerator. That sort of stuff is so cold it hasn't got any guts. Songs should have sex, fun and basic excitement, a lot of that is lacking in so much other music.

"Some of the groups today are violent but they don't have romance. Violence and romance are great passions that embroil people, take the story of Romeo and Juliet. Yeah I know violence. I used to play football where you really slam into people and tear them apart."

How anyone could dream of tangling with him is beyond me and visions of Meat Loaf charging down a field splattering everybody in his path aren't hard to conjure up. But let's get back to his musical career. His roots lie in Texas gospel and he projects that kind of fervent power on stage, especially when he demonically rolls his eyes around. Moses could have done with him in the Old Testament. 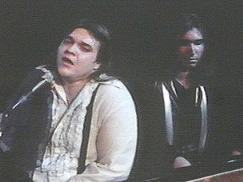 The gig at the Apollo showed how much of a showman he is with plenty of audience control. He has the same charisma (if that's the right word to use) as Ted Nugent who he used to sing for. The duo have been trying to out do each other on promotional stunts, but in Britain Meat Loaf seems to be a little more subdued. A press gig is very quiet with Meat Loaf wandering off somewhere drinking in a bar.

The following morning a coach drives the entourage to the station for the trip to London. Meat ambles over to the bookstand before wandering down the platform like a sleepy bull elephant. The local populace are excited by the lurid red tour jackets that he and the tour party wear and nudge each other and point. The band are like a bunch of excited school kids before they settle down on the train. They head off for breakfast except for composer Jim Steinman, who sits quietly shrouded by his graying locks. When he starts talking there's no stopping him.

"I like German opera. I'm very much into Wagner. Yeah, so was Hitler, but I don't like him too much. There's a close link between the opera singer and the rock singer because of the great physical pressures and extremes they put themselves through to get their voice across.

"The Who are a band who have captured a feeling of romance and violence. I often think that real rock and roll stars should look good on motorbikes. I can see Peter Frampton riding along the road on a hairdryer.

"The California that I know and love is not the California suggested by LA. It's got too comfortable and the music is too complacent. Every 10 minutes you're hearing the Bee Gees or Fleetwood Mac, music is just being designed to be wallpaper. They won't play Meat Loaf down there because it doesn't fit in with their comfortable little niche, they're afraid it might be too exciting. But we're doing some concerts down there so I hope we're going to break.

"My ambition is to sell five million copies of this album in the States. A lot of sales so far have come from New York, Boston, and Cleveland. I love New York, there's a constant pulse of life 24 hours a day. I live in a pretty sparse apartment, which I regard as a base to go out and do other things. I'm into heroic things and in order to survive a working day in New York then you've got to be a hero. A kid growing up in New York truly experiences life. He sees and feels everything and of course he's open to a wide range of music because it's such a mix up of ethnic cultures.

"But there's the tragic side to the story as well. I know of dope pushers hiring eight or nine year old kids to kill other dope pushers, because kids are difficult to charge with serious crime."

The young Steinman was something of a piano genius but he gave it up because: "I was flash and playing too fast." He took it up again some years later and became a composer and arranger. For a long time the potential of 'Bat Out Of Hell' went unrealized and it was the age old story of peddling the work around record companies and having the door shut in your face.

"At that time we didn't have a band to perform it, so I'd sit in a room with Meat and I'd play and he'd sing. I knew in my head what the full version should sound like but with just the two of us it was difficult convincing the record people. Meat and I had already spent a full year rehearsing the material and I think he took the disappointment worse than I did."

But salvation was at hand with Todd Rundgren and no expense was spared in getting the record right, one track alone costing 10,000 dollars to mix. Renowned artist Richard Corben was brought in to do the cover, depicting a guy on a motorcycle breaking out of a crypt, for God knows what kind of purpose.

"They were going to use the guy who does the Kiss stuff," continues Jim. "But I hated it, like all the Kiss cover the stuff he came up with, it was cheap and tacky. I insisted we use Corben, his style is very powerful and muscular. Since the 'Bat Out Of Hell' cover he's probably been swamped with hundreds of other offers.

"A psychological research team was commissioned and they found that visually it was the second most powerful album cover, the first was Boston's which had flying saucers on it. It must have made an impression on buyers flicking through casually in a store. We'll be using Corben again on the next cover."

The journey continues through the peaceful countryside were the spring lambs bleat and the sun beats down (Oh no, not that line again - Ed). Somehow we manage to get around to the Vietnam war. Like most people, Steinman didn't want to go and an army man agreed with him.

"It was said that I had borderline psychotic tendencies and that I shouldn't join up because I might end up shooting a superior. I was shown one of those ink blot pictures and I thought it looked like a flock of bats swooping down and carrying off children at a picnic."

Enough of this, let's get back to the record.

"I try to conjure up pictures. I like the Hitchcock approach of letting people become voyeurs because there's and element of the voyeur in all of us. Writing a love song is very difficult, because you have to get away from all those old moon in June clichés."

I reckon Jim's proved himself on 'Heaven Can Wait' and 'Two Out Of Three Ain't Bad', sophisticated sentimentalism. Apart from starting another album, which Jim is viewing with a mixture of pleasure and dread, the songs on the first side of 'Bat Out Of Hell' will be used in a film called 'Neverland', a futuristic sci-fi version of Peter Pan. The country has been desolated by chemical warfare and the majority of the population live in vast cities under vast sterile domes. Peter and his friends are kids whose genes have been so altered by chemical warfare that they can't grow up and become renegades on the outside of the city.

"I'm going to have Meat as Tinkerbell," says Jim. "In the movie he doesn't talk and he goes around killing people. I think it's perfect casting."