As rock 'n' rollers gather at the doors of the theater, rock 'n' rollers whose names are hard to ignore, Jim Steinman for one, thinks theater traditionalists should forget about bolstering the barricades and bake 'em a cake.

"Theater stopped growing in the 1950s," says Steinman, who is best known as the guy who produced Meat Loaf's "Bat Out of Hell," but who came to public attention when he wrote and produced a controversial musical at Amherst.

"Great theater music always reflected the streets," says Steinman. "But by the '60s, what did 'Hello, Dolly!' reflect? Nothing. Theater disconnected from the music of its time. 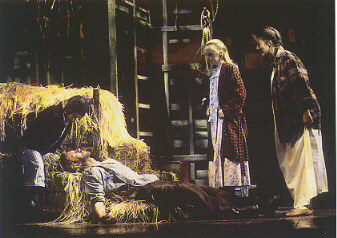 "Rock could change that."

On a modest but noticeable scale, it's poised to try.

Elton John's music will be heard in "The Lion King," though those tunes come from his mellow side. Randy Newman's "Faust" has been produced at the Goodman Theater in Chicago. Billy Joel has put aside his rock-star career to work on a musical. Kate McGarrigle is working on a musical about Jack Kerouac.

What's significant about the first three, in particular, is the serious clout they have behind them – enough to break past the theater's wary relationship with rock music.

Music labeled "rock" has been popping up on Broadway since "Hair" in 1968, but almost always in diluted, tangential forms. "Hair" and subsequent productions like "Jesus Christ Superstar" nudged into the fringes of rock culture, but weren't really rock in the same sense as anything being played at contemporary rock shows or on radio.

The same can be said, to a large degree, of today's showcase "rock" show, "Rent." Where are the radio songs?

Besides, says Jim Freydberg, producer of "Big" and "Fool Moon," among other shows, "The success of 'Rent' has nothing to do at all with rock 'n' roll. It could be classical music. What's made 'Rent' a success is brilliant marketing that's told a younger audience this is their show.

"Lloyd Webber has done grand rock scores for years, but that hasn't brought younger people in, because it's still a Broadway show. It's not their vernacular."

So rock 'n' roll per se, Freydberg says, isn't necessarily either welcome or unwelcome in the theater. The key factor is the package it arrives in. That's why "Rent" drew so many more young people to the theater than "Tommy," he says – because "Tommy" was seen as more past than present.

Theater has also visited the past with slick revues built on rock songs, from "Beatlemania" to "Smokey Joe's Cafe." But they are largely for a nostalgia crowd, and the problem of polishing up rock 'n' roll to a Broadway gloss was underscored by "Leader of the Pack" – a wonderful night at the cozy Bottom Line and an overblown, misguided evening on Broadway.

Full-strength rock simply has not yet worked in theater – and even those trying it now are finding it takes years to assemble.

Joel has been working on a musical for years. Simon's "Capeman," based on the 1959 murder case involving 16-year-old Salvatore Agron, has taken seven years.

"It was always a story that fascinated me," Simon said in 1993. "I saw in it the New York of those times – this dangerous, shadowy figure, the fear of gangs and juvenile delinquents. It's a story where music enhances the telling."

The 30-plus songs in "Capeman" blend salsa, plenas and 1950s street harmonies – new turf for Simon. And everyone else.

"Whistle Down the Wind," inspired by an obscure and somewhat dark British movie about the stark lives of four characters in Yorkshire, has the big advantage of Lloyd Webber's name, and since he's doing the music, some of his sound. But Steinman says the songs are rock, with lyrics from the same wellspring as, say, the No. 1 hit he just wrote for Celine Dion, "It's All Coming Back to Me Now."

"There's always been a theatrical element in rock, including mine," says Steinman. "In a way, it's easier to write for a stage production, because with a song you have to create the theatrical elements. On stage, those elements are there."

Steinman, who also has written a solo musical called "Dances With Vampires," says he's encouraged that rockers are writing for theater. He wishes the Beatles had done it, he says, and he'd like to see Jimmy Webb onstage, too.

What it means, he says, is the guard can change. "I don't think there's anything that inherently keeps rock fans out of the theater except that the theater has not presented music they want to hear. 'Tommy' helped. 'Rent' helped. 'Whistle Down the Wind' will take it further. Some people don't think of Andrew as a rocker, but he'll surprise them.

"This show is like combining rock 'n' roll with opera. I think people have been waiting for something like this."