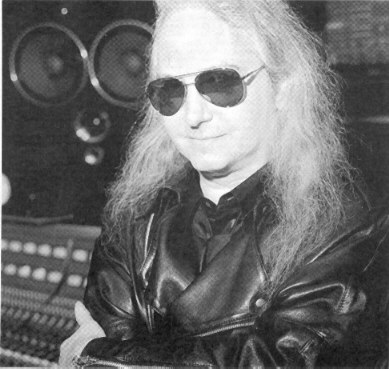 How did the composer of Meat Loaf's hits become Lloyd Webber's latest lyricist?

Jim Steinman is the bat out of hell incarnate, a man who inhabits the night. He does not get up before late afternoon, and I was warned that nothing would happen until then. So I loitered around at the Hit Factory in New York, where he recorded the multizillion-selling Bat Out of Hell I and II classic albums for Meat Loaf. Michael Jackson and Bruce Springsteen stared out at me from the framed platinum discs lining the walls. In fact, he was only 10 minutes late.

Steinman's gentle speech and genteel manners are at odds with the strident and fanciful language of his lyrics and the complex, orchestrated, operatic rock he composes. Bats, hell, vampires, cars and motorbikes, bad girls, obsessive love – these all litter the Steinman canon. If there is a message, it's that you have to grab life while you can, realise your dreams, and get a girl to ride pillion with you without commitment. "And objects in the rear-view mirror may appear closer than they are."

He looks more roadie than composer, except for his clean, neatly manicured quarter-inch fingernails. His jeans are ill-fitting about the bum, and his long fluffy grey hair brushes his leather biker jacket. He's wearing a black shirt and a black Yamamoto tie that depicts a skull, with two women sitting in the eye sockets. He believes the tie exactly reflects his character. "It's whimsical and funny. I've always mixed really dark obsessive, often violent, stuff with really funny stuff. I've never really seen them as being in conflict," he says.

It was this dark obsessive side that drew Andrew Lloyd Webber to Steinman as a possible lyricist for his relatively dark and obsessive The Phantom of the Opera, but Steinman turned him down to honour a commitment to record a Bonnie Tyler album. It was, he admits, his worst mistake. Not so much financially – he's a multimillionaire anyway – but artistically. Lloyd Webber bore no grudge, luckily. He returned to Steinman when he was looking for a lyricist for his latest musical, Whistle Down the Wind, based on the 1961 film with Hayley Mills and Alan Bates. This time he didn't turn Lloyd Webber down. It opens in Washington DC on Thursday, and moves to Broadway in April.

Whistle is Lloyd Webber's first show to premiere outside Britain since Jesus Christ Superstar 25 years ago. For Steinman, it is his return to the musical theatre after 22 years when, as a graduate of the prestigious Amherst College, he was spotted by Joseph Papp, founder of the New York Shakespeare festival. After his first musical was banned because of its nudity and bad language, Papp put him together with Michael Weller, who wrote the screenplay for Hair, and it was during auditions for their musical More Than You Deserve that he met Meat Loaf, and transferred to the world of rock.

Culturally, though, he has always been omnivorous, taken to see Beckett plays and Wagner operas from an early age by an artistic mother. He doesn't like the word, but his first hearing of Wagner was an epiphany. He was nine and a New York radio station was playing the full Ring cycle nonstop. He was rooted to the chair for the 22 hours of the broadcast. Loosely speaking, the theme of Wagner's opera Tristan and Isolde, with its extreme passions and obsessive love, informs all his best work. It is apparent in the song It's All Coming Back to Me Now, recently a top-five hit in the UK and America for Celine Dion. Lloyd Webber told Steinman he thought this song "the greatest love song ever written", and on hearing the Dion version reportedly said: "This will be the record of the millennium."

Clearly there is a mutual admiration society going on between the knight of the theatre and the half-Jewish New Yorker. Together they enthuse about everything from Richard Rodgers – "the greatest melodist of the 20th century" – and opera, to rock'n'roll – they went to see Gary Glitter together – and wine. When Lloyd Webber first invited Steinman over for dinner, he asked him which three people in Britain he would most like to meet. Not believing he was serious, Steinman rattled off Michael Broadbent, the wine critic, George Martin and Joanna Lumley. Lumley was away but the other two showed up.

Steinman's appetites include everything English. He listened to The Goon Show when he was 9 or 10 and was thrilled by the language, even though he understood only about 10% of it. He loved the images of Britain he saw as a child in an illustrated Dickens, and he is a great fan of English classical music.

He had also seen the film of Whistle Down the Wind – which surprised Lloyd Webber – and didn't think this haunting, very British story about an escaped murderer holed up in a barn, whom Mills's character mistakes for Jesus, was an obvious choice of subject for a show. "I thought, God, how could that be a musical? Then Andrew's next line was, 'What do you think of setting it in America?' When he said that, it just clicked. Andrew was originally thinking more of a Midwestern setting, but to me it was immediately evoking the world of Faulkner and Tennessee Williams, that southern gothic world. And that got me really excited." They settled on Louisiana in the late 1950s.

For Steinman, Lloyd Webber embodies much of what he loves. He sees him in the tradition of Vaughan Williams and Elgar, and though he never talks about Lloyd Webber's English toffness, being introduced to Lloyd Webber's world must be like living out those films and books he so admired. "It's like entering a whole different universe," he says.

Temperamentally, they are different. Steinman is prone to dark moods, though it is not apparent in his genial company. He embraces the dark, literally, rising at 5pm-6pm and going to bed at about noon. He lives alone in a small rented house in the countryside an hour outside New York. He loves his own company and has spent up to nine days without seeing anyone else. "My brain never stops – it's so hard for me even to sleep."

Here is a man who was diagnosed as borderline schizo-phrenic when he went for his medical to be enlisted for the Vietnam war. "I am," he says, "not happy much. I get really depressed, unbelievably depressed. This is hard to articulate. I don't find being incredibly depressed depressing, if that makes any sense."

Aspirins form a big part of his life. He takes them every four hours to ease the constant pain from a dental disaster that allowed his adult teeth to grow sideways into his gums over childhood teeth that did not fall out. It was all compounded by incompetent dentists. He went into great and painful detail about a dental operation.

"I am conscious of pain a lot. I've lived with it since that operation. I don't know how that affects me. I don't want to sound morbid about it – people live with a lot worse – but I think it has affected me in some ways quite deeply."

Steinman is undeniably weird – and, as I found, generous. After our three-hour chat, he took four of us to a smart French restaurant where the bill topped $800. He ordered most things on the menu, some of them in double portions, for us all to share. He says he is gluttonous, but not so much for food, more for experience. Being with him is a bit like being in one of his songs.

Steinman protects his songs as if they were his children. Meat Loaf had for years wanted to record It's All Coming Back to Me Now. But Steinman saw it as a woman's song and turned him down. It ended in court. Steinman won, and Celine Dion went on to record it. Yet he has found it liberating being librettist to Lloyd Webber's score, and thus vacating the composer's responsibilities for the first time. Somehow, two control maniacs can work side by side without friction. "It's a very collaborative effort. We're involved in casting together and we work on the whole piece together. I never feel subservient."

Their only artistic disagreement has come over using precise rhymes. Steinman prefers not to use rhyme, but Lloyd Webber, the traditionalist, has brought him round to his thinking. Steinman, in his turn, has brought his influence to bear on Lloyd Webber, who, he reckons, has written his most rock'n'roll score since Jesus Christ Superstar.

"He's the boss in the sense that he's the producer, but I couldn't ask for a nicer collaborator, really. He's very demanding and intense – but then I am, too."