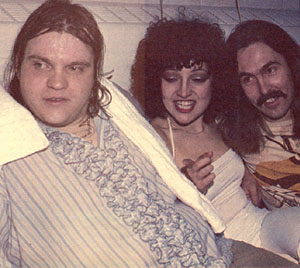 Meat Loaf - Why Him?
I Would Buy A Used Car From Meat Loaf -
A Political Manifesto Of Sorts by Lester Bangs

Robert Christgau, whom not a man nor woman here among us would dare challenge for his throne as Dean Of American Rock Critics (Yeah, but what about the Dean of Senegalese Rock Critics, huh?) (Lisa, I beg your pardon, you do seem to get around a lot, perhaps you after all want to contest Mr. Christgau for the crown 'n' scepter or whatever the hell it is deans tote around with them? "No thanks. I have to go interview Jerri Hall...why don't you and Billy Altman slug it out with him, Lester?" Okay, if you'll change the name of this magazine from Hit Parader to Incest - come to think of it, we'd probably sell more copies of it that way, specially if we put the Bee Gees on the cover into the bargain), recently said to me these exact words: "I'm proud that the Village Voice 'Riffs" section," which Big Bob edits, "is the last bastion of pretentious rock criticism."

We were having two beers and two hamburgers at the time. And speaking of time (oh, yeah; that stuff), in the time between these thoughts and words turn turn turning till everybody's been burned one must in the face of all artificial energy ask if this is placing too great a burden on Bob's shoulders. I think so, don't you? Sure. (God, I feel like Mr. Rogers, writing in this lousy magazine.) Okay, so let's, uh, let's...hey let's SEIZE THE MOTHAHUMPIN TIME & DAM WELL DO SOMETHING ABOUT IT? I WANNA KNOW, ARE YOU PART OF THE SOLUTION OR PART OF THE PROBLEM? IT ONLY TAKES FIVE SECONDS TO DECIDE YOUR PURPOSE HERE ON THE PLANET? (To steal Super Sneaky Squirtin' Sticks c. WHAM-O Inc., from Kay-Mart, that's why.) SO I WANNA KNOW ARE YOU READY FOR THE NIGHT TRAIN? READY READY READY READY and furthermore GONE GONE GONE GONE GONE? I GOT MAH EYES WIDE OPEN!

Well, then, good then - we will hereinafter endeavor to make Hit Parader the most pretentious rock mag around: critics whom no one has ever heard of or certainly would not recognize on the street squabbling interminably over nothing like whether say Kaya or Darkness at the Edge of Town is (as sex critic A) "one of the most masterful manifestations of a fundamental change in the dental charts of rock occurring during this vernal equinox" or (according to Brew 102) "a bucket of shit."

Yeah! What fun all you readers'll have, watching us rock critics here every month, picking the onions out of each others' teeth! So, herewith and with no little pomp I fire the first salvo: MEATLOF! (oops, spelled it wrong) Meat Loaf is (sic) a genius. I'm listening to his first album through headphones right now as I write this, and you can see from what rubbish you already read how this record has inspired me. I love it. Wow, here comes the Delaney & Bonnie section! Hey, where'd they get those black chicks (hope I'm not being presumptuous calling 'em that) chanting "Shop shop shoo" just at the right time! Hey hey HEY! Wodda recud! Whooops, what's that, I smell smoke, oh it's a synthesizer and what sounds like a carnival barker imitating Phil Rizzuto - holy cow indeed! This record is like a one-way ticket to Coney Island, if not that place where they sent Pinocchio and the other little fools to eat cotton candy till dey come a crop a vomit.

Oh my god, you're not gonna believe this, but right at this very moment (well, not while you're reading it, but while I'm writing it; guess we must make allowances for the yawns of Father Time who has seen ALL of 'em come and go, besides which the Meat Loaf circus is probably playing somewhere, in some stucco-armored suburban bedroom way down Encino way even as your eyes scan these codwallopings, in fact a record as great and with such universal appeal as Bat Out Of Hell, why hell I bet it's somewhere lots of places in fact, every second of your waking day, while you're taking a crap, while you're stuck in traffic, while you're wondering if she's gonna get weird when you say "Wanna come up to my place for a while?", while you're whiling away the endless existential hours making love, a physical juxtaposition mit attendant rotational/gravitational differentials which Mr. Loaf himself is not ashamed to say he is totally in favor of, as did Sky Saxon before him - face it, you're never gonna escape from this elpee slab of gorgonzola) Mr. Loaf and his lady are getting ready to, uh, wait a second, click, dit dit dit dit dit bzz, click, brrring, “Robinson Amusements incorporated.”

“Hello, is Lisa there?” “Who is calling, please?” “Halston.” “Okay, just hold on a second, sir.” “…Daaa-ling…!” “Lissen Lisa, this is Lester, I have to know whether in the process of describing this Meat Loaf fellow you saddled me with, I can refer to or describe the sights or sounds of implied effluvia of a man and woman having sexual intercourse?” “Well, Lester, you know Hit Parader’s policy on that word…!” “Lisa, please, I don’t even use it in my daily speech at Washington Square Park! I just want to know if I can describe a couple of heterosexual adults…uh, well, you know…”

“Is it absolutely necessary to the piece?” “It’s on the record.” “Hmmm. Well, I guess if we can print makeup tips we can get by with this. Just try to curb your Meltzerisms and not say anything bad about people like Clive or Ahmet Ertegun, okay? You know you’ve been a very bad boy lately, don’t shape up and mama gon’ spank!” “Yeah, I know, you’re right Lisa, it’s okay, Mr. Loaf’s on Epic and I forgot the name of their president, okay, yeah, great, thanx, like I said, whew!” - yes my friends as I was saying, should you happen to ply up the provender necessary unto purchase of this Meat Loaf album, which is the only one out so far so you can’t get too confused, then you and your lady friend too if you’re so minded can apprehend the luxuriant privilege of hearing a man and a woman (Mr. Loaf and his Femme de soir, sans doute) MAKING LOVE as all the broken umbrellas are shipped in dark slitlid cattlecars like fallen silos off to cherbourg death camps.

Now, here’s where the political part comes in: just because Mr. Loaf is in favor of heterosexual intercourse, apparently, all the gangly four-eyes spindly-legged hunchbacked sissifixated rock critics have decided that he stinks! Never mind that American boys and girls, or American citizens with money of whatever wherever, ran out by the hundreds of thousands to buy this mothahumpin album - these self-appointed expert hotshot rock critics have all decided that Mr. Loaf is just a sham if not a scam if not both.

Now, I ask you, in the light of that, how could they possibly have the gall to think they’d gleaned enough of your trust to get you to go out and buy the Sex Pistols or whichever foulmouthed hyped-up bit of regurgitated Dylan dog vomit they’re pumping up this week?! Forget it! Robert Christgau made Bat Out Of Hell his “Must to Avoid” in the Dean of American Consumer Guides the same month he made an album by an English group called Wire “Pick Hit.” Pretty funny, a dean picking hits in the first place, Clark Kerr abacussing out Screamin’ Jay Hawkin’s in the 7 A.M. light. But I heard that album by Wire, that “Pick Hit.” It sucks.

It’s the deadest record, possibly, that I have ever been privy to in my life to date. Meanwhile, I’m sitting here with Meat Loaf blasting through my headphones, taking the words right out of my mouth, thanks a lot you fat sonofabitch, but no, that’s just kvetching between friends, or should I say stars and their functionaries, you all know if you seen say My Man Godfrey what that’s about, and is not Meat Loaf a metaphor for the Man Godfrey in us all, I ask you? Though starbrite now, has he not so obviously, as have we not each, been a Godfrey at some point in his poor pathetic life? Yes. This man has been thru the tongs and pangs and backalleyes of hell.

He’s PAID HIS DUES BUSTER, so you better just SHUT UP whatever you were gonna say agin him. Like f’rinstance this other rock critic Billy Altman, who also writes for rock magazines, well he happens not to like the Meat Loaf album any better’n Mr. Xgau, in fact he described it to me thus: “A real sucker punch. Meat Loaf’s just a patsy for Jim Steinman and who’s really getting taken with all this let’s - fill - the - cars - and - girls - operatic - Springsteen - gap business is the poor suckers that end up buying a record like that piece of crud.”

So, you hear that, that’s what that guy thinks of you, all you Meat Loaf fans, he thinks you’re so stupid he can’t even be bothered just calling you jerks, he’s gotta condescend to you “poor suckers.”

Christ, and people wonder why rock critics are looked upon by the populace gen’ral as below the gnat. Hey, wait a second! That means he must think the same thing of me, since I like the Meat Loaf album too! All right, that’s it - jeeze, how appropriate that just as I am writing this Meat Loaf is singing, “All Revved Up With No Place To Go,” now why can’t these stupid rock critics see that just like Dylan in the Sixties he, Meat Loaf, the Big M, defines for we, the people of the Meat Loaf Nation, exactly what we are thinking and what we should do about it at any given moment.

Sure am glad there’s always some guy like that around. Meat Loaf is the Dylan of the Seventies, the real peoples’ populist Rocky type Dylan, not some twit like Elvis Costello. Well, look - you’re pissed off, I’m pissed off. Are we just gonna let these pea-brains keep on squatting round our headphones, muttering how we really should be listening to the latest Punkenwald monstrosity instead of real music?

Hell no! I, as a disaffected, possibly disbarred rock critic, want to give up my media soapbox, let Dave Marsh have it so he can push more Bruce Springsteen albums about the hotrod American adolescence he (Dave) never had. Let me just mellow down easy ‘mong the people, my people, the only people not covered in People magazine, and that’s because we’re real people, the people of Meat Loaf Nation, who may well outnumber you establishment media pigs who don’t wanna think there should be anymore hit singles from this album, and as we gather like Rastas smoking our doobies and plotting our revenge, you may hear our battle cry: “WE’RE MAD AS HELL AND WE’RE NOT GONNA TAKE IT ANYMORE!” Either that or “THANK GOD IT’S FRIDAY!”