The penultimate No.1 single of Take That's first incarnation, the 1995 classic Never Forget was sent into overdrive by the production fairy dust of the late, great Jim Steinman. Here, the one and only Gary Barlow recalls the origins of an emotive pop masterpiece that has truly stood the test of time… 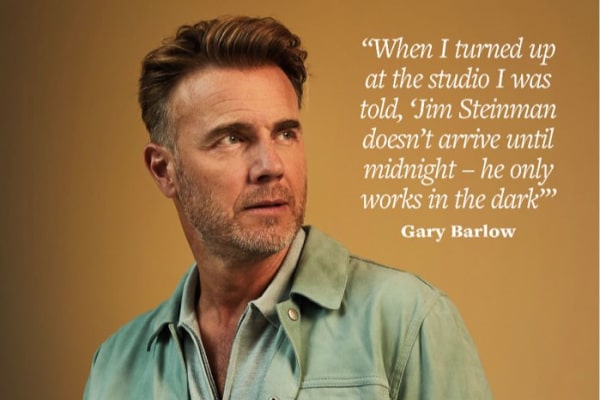 Whenever I'm writing for an album, songs don't come out as songs; they come out as big clumps of music - three or four, or even five or six songs at a time. I remember doing a big batch and the one I always look back and go, 'Christ, what was going on in my brain?' is Never Forget. With Take That, what used to happen was that we'd go off on a world tour and then, when everyone got home, the label would say, 'We need the new album in two weeks.' The lads would all go off to Greece and I'd be stuck at home writing a bloody album! So these records would happen very quickly. I was 15 when I wrote A Million Love Songs, but it was kind of on its own. I've got those old tapes and there was nothing else of that standard. I really started songwriting in 1988/89, about two years before the band got going. I'd left school by then and was writing all day and gigging all night, every night. I'd listen to pop music with my headphones on, studying what people were doing. Then in the evening, I was going out and singing Neil Diamond and Lionel Richie songs and it was like another world. I love to listen to music; it refreshes what you're looking at and I like that as a writer. The idea of coming into the same room and hitting C on the same piano every day is not inspiring; there isn't going to be anything new and interesting that comes from that. So by listening to music, or going into a key you don't normally write in, it keeps the palette fresh. Never Forget is a very poignant song that is definitely about where we were in our lives. But when we sing it at concerts, I always think, 'Good god!' I was only 24 or 25 at the time, right? And it still amazes me when I read those lyrics back. So little life had been lived at that point and there are lines in there where you think, 'Where does that even surface from?' Looking inward wasn't really me at that time and that's what I think is amazing about it; you're writing these things on the fly and it just unconsciously appears on the page. But that's songwriting - so much of it is unconscious and a feeling. Howard [Donald] sang lead vocals because we'd reached the point where we were a vocal group and were sharing.

When we started, there was only really me and Rob [Robbie Williams] who could sing proficiently. But the other lads came on so quickly, so it was about sharing it around and giving everyone else a bit of a voice. We were keen on making the single version different from the album version, and my brother used to listen to Bat Out Of Hell all the time, so we came up with the idea of sending it to Jim Steinman. The original Never Forget was like new jack swing - there was no choir and it was very simple. it was big, but nothing like it became when Jim Steinman got hold of it. We went to New York and I turned up at his studio but was told, 'Oh, Jim doesn't arrive until midnight.' I said, 'What?' They said, 'No, no, he only works in the dark…' You know what the jet lag is like after coming over from England - you're in bed for 8pm - so I actually went to bed and then returned to the studio at midnight. Anyway, he turned up with a big cloak on and left as soon as the phone started ringing in the morning. He basically went crazy on it. He put the kids' choir on there… Essentially, all he kept was the lead vocal. I think he had a reel-to-reel [recorder] all hooked up and it ended up having over 100 tracks. I had never seen anything like it. A couple of years ago, when we were putting the Odyssey [re-imagined greatest hits] album together, we got all the multi-tracks transferred from the reel-to-reels and I tell you what, it was an education listening to it - every single track is just precision. Jim was a real master and a lovely guy. Very strange, but so talented and he made that record what it is. And do you know what? As we said our farewells, he said he had another meeting and as I walked out, Celine Dion was waiting to come in. She did It's All Coming Back To Me Now [written and produced by Steinman] and that was the start of them working together. 'Someday soon this will all be someone else's dream.' Did know then that the hand was close to splitting? It must look like it was really well planned out, but it really wasn't. I'm sure that it's the same for any artist - you do the best work you can in that moment and just hope that people engage with it.