Jim Steinman has worked with almost everyone. So why not Lloyd Webber as well… 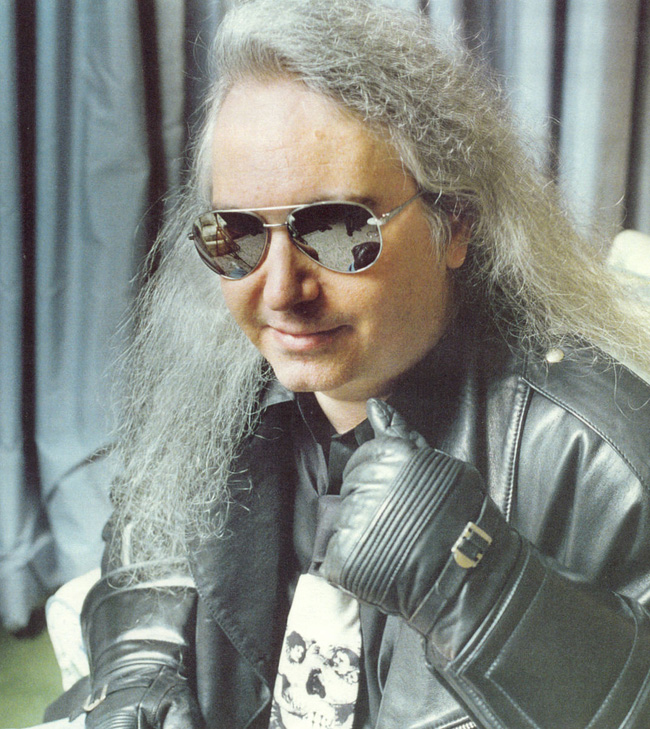 TWENTY YEARS after "Bat Out of Hell", Jim Steinman, who wrote all of its words and music, is only vaguely recognisable as the man standing next to Meat Loaf on the album's back cover. While Loaf has lost a couple of stone since that photo session, Steinman has gained a similar amount. His hair is still long, but is now completely silver.

His dress-sense has not aged with him. In his Dorchester hotel suite last week, he was wearing dirty white Reeboks, faded blue Levi's, a black shirt, a tie decorated with a large skull design, and a biker jacket with Excaliber painted on the back. "Andrew keeps wanting to take me to lunch at the House of Lords," he says, "but he can't figure out if there's a dress code..."

The Andrew in this last sentence is Andrew Lloyd Webber,who has a new musical, Whistle Down The Wind, opening in London on Wednesday. Steinman is the lyricist. For a Steinmaniac like me, it's a dream come true to meet the man whose lyric sheets were pored over by my 10-year-old self, but it's hard to reconcile Lloyd Webber - lowbrow, Tory, loved by grannies - with Steinman, overlord of gothic rock'n'roll excess. "Hey, grannies love me," he protests. "They're gothic grannies, but... you know, Andrew's public persona is very different than his private persona. What I see, basically, is this great big kid, who just listens to music and jumps up and down and cries and laughs."

As his clothes might indicate, Steinman is a big kid himself. Sardonic and mysterious in photographs, in person he is the most buoyant and voluble interviewee imaginable. His brown eyes gleam as he chatters fluently about everything from draft-dodging to the derivation of the word "Cajun".

He quotes bad reviews with gleeful appreciation, he rhapsodises Phil Spector and Wagner, and he follows my first question with three hours of storytelling, reducing my contribution to the interview process to an "Oh really?" and a "When was that again?" every 20 minutes.

So what about Andrew Lloyd Webber? "I'm not really that much the opposite of Andrew," insists Steinman. "Musically, we have the same roots. We grew up with opera, theatre, music and rock 'n' roll: a rare, strange and combustible combination. And I set out to do theatre. I was amazed I ended up doing records. To this day I put a lot of my theatrical impulses into records, and I think Andrew has put a lot of his rock'n'roll impulses into theatre. We've had parallel careers... except he has about $800m more than me, so somehow they didn't work out quite so parallel!"

Steinman's career got off to an explosive start in 1969, when, as a student at New England's exclusive Amherst College, he wrote The Dream Engine, "an unbelievably brilliant three-hour epic rock musical" featuring killer nuns and a 55-minute nude scene. He was signed up by Joe Papp, producer of Hair and A Chorus Line, and by 1973, they were staging Steinman's first professional musical, More Than You Deserve. One of the auditionees was an overweight Texan christened Marvin Lee Aday, but better known by his high-school nickname. "Meat Loaf walked in, in overalls, and sang, `You've Got to Give Your Heart to Jesus'. His eyes rolled into his head, you could only see the whites of his eyes, and he convulsed his hands in these great eloquent spasmodic motions. I thought, this is the most thrilling freak I've ever seen. And also I thought, this is a true Wagnerian Siegfried."

Steinman was tiring of the New York theatre audiences of the time - "old people and their parents" - so he set about cutting an album with his new friend. Unsurprisingly, it wasn't easy convincing investors that viable competition for Saturday Night Fever consisted of a sweat-drenched man-mountain bellowing an 11-minute aria about a fatal motorcycle crash. "We got rejected by at least 50 record companies and producers." But when Bat Out of Hell was eventually completed, in 1977, it was unique: a head-on collision of German opera and the humour and immediacy of early-Sixties American pop. It's now the third biggest selling album ever.

Steinman wrote another album for Meat Loaf, Dead Ringer, and when Loaf temporarily lost his voice, Steinman sang on an album of his own, Bad for Good. By this time he was so in demand as a producer and songwriter that he could pick and choose his next projects. His fans have never quite been able to work out why he picked and chose the ones he did. "It's pretty weird to have done both Barry Manilow and Sisters of Mercy," he laughs. "But I never deal with what's supposed to be hip or not. I just take projects that are interesting."

Hence, his "spotty, strange career", which has more recently seen him share studios with Celine Dion, Take That and Meat Loaf again, for 1993's Bat Out of Hell II. It was almost as hard to get off the ground as its predecessor. "The record companies thought it was a joke. I said, trust me, 16 years is exactly the right interval. You guys put out records too fast."

In 1984, Lloyd Webber asked him to write the lyrics of Phantom of the Opera. Steinman was busy with a Bonnie Tyler album but the composers kept in touch, and 10 years later, Lloyd Webber suggested another collaboration.

They have been working on Whistle Down the Wind, on and off, ever since, and Steinman has also had time to squeeze in another project: he was commissioned by Roman Polanski to compose a musical based on his classic horror-comedy, The Fearless Vampire Killers. Dance of the Vampires opened in Vienna last October, and is now the biggest show in Europe. "Bigger than Phantom," smiles Steinman. "I'm actually the first person in history to have done this, to do music for one show and lyrics for the other in one year. Probably a dubious achievement."

The man who wrote, "A wasted youth is better by far than a wise and productive old age" is a living contradiction of his own maxim.

"I'm 50," he says. "I can't believe it. Fifty really is apocalyptically old. I love making fun of old David Crosby rock'n'rollers who look ridiculous, but I'm one of them now! I don't care. I've actually decided there's nothing wrong with that. It's better to be an old rock'n'roller than an old accountant."