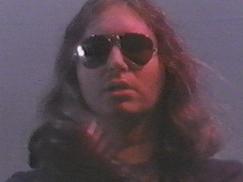 Meat Loaf axed, horror - shock! This is the follow up to 'Bat Out Of Hell' but it's performed as well as written by Jim Steinman, that album's composer, while Loaf strives to satisfy the record company with his follow up. 'Bad For Good' establishes that Steinman was 'BOOH' in all departments except that of vocal melodrama. Trouble is, that's a fairly central bureau both there and here and though Steinman has a fine voice it lacks Meat Loaf's weight or drama.

The sound remains as full, the songs as street operatic, the words as long and witty and the vocal arrangement as layered as raisins in a fruit cake.

And a fruitcake Steinman certainly is. Take Springsteen's already toppling melodrama well over the edge into a state of permanent, itching, street sussed LUST, turn up the drums to 1812 capacity, orchestrate the whole thing with more keyboards than Keith Emerson has ever seen and you have 'Bad For Good.'

But while Meat Loaf's presence and delivery equaled Steinman's overweight imagination and endowed it with a lightening dose of tongue in cheek humor, Steinman himself is too literate and literal for comfort. Compare the rewrite of 'Paradise By The Dashboard Light,' 'Dance In My Pants' and you'll see how produced, how relatively academic Jim's job is.