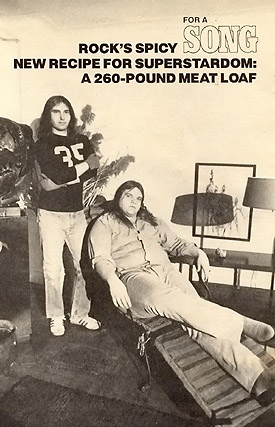 At the end of a scheduled concert set, some wrung-out rock stars stagger offstage and do something - Southern Comfort, grass, uppers - to gather the energy to hurl themselves back out in response to fans howling for encores. But rock's newest monster act (in every sense of the word) is a titanic, dynamic 260-pound Texan who's refined the pre-finale kick to its purest form. At the end of his act, Meat Loaf (his legal name as well as the band's) stumbles gasping into the wings and takes a snort: not of coke but of uncut oxygen, straight from the tank.

"After four shows in two nights in New York," Meat says, "I didn't even remember going out or coming off. I passed out completely. In Atlanta I was paralyzed on the floor. I looked up and this gorgeous blond Scandinavian nurse all in white was leaning over me asking if I was all right. Shit, I thought I had died and gone to heaven." After another bruising gig, recounts composer-keyboardist Jim Steinman, "Meat was passed out and my knuckles and nails were bleeding. We looked like the Eagles after a bad day - I mean the Philadelphia Eagles." 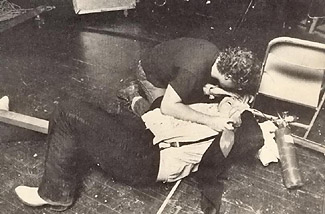 Stayin' alive, of course, isn't all that Loaf is about. Stuffed into his ruffled size 52-shirt and bulging black tux, and stomping, shaking and sweating, the 29-year-old Texan is the Brobdingnagian epicenter of the most visual new show in rock. When his powerful stage sound was packaged last fall into a debut album, Bat Out Of Hell, it made a late entry on many 10-best lists and has since sold 350,000 copies in the U.S. alone.

"Our show creates a lot of real excitement," understates Meat. During his eight-minute anthem to adolescent sexuality, Paradise By The Dashboard Light, he paws his backup singer in a choreographed make-out. When he recently mounted a piano, Steinman winces, "He cracked the soundboard. I started out that night playing a Steinway and ended up with a Steinman." Meat counters, "I'm really very agile - I can do seven pirouettes in a row. My mind thinks I weigh 110."

Actually, Meat can't remember ever weighing less than 185 when he was growing up in Dallas. His father was a salesman, and his hymn-singing mother and aunts sang on Bing Crosby's old radio show. Both parents are now dead, but their star son adopted his stage name and closely guarded his real one - Marvin Lee Aday - to save his devout Church of Christ kin from embarrassment. The nom de guerre itself originated with seventh-grade classmates in commemoration of his initials and size - 5'2", 240 lbs. Though a brilliant student, he remembers feeling relatively "poor and denied" at Thomas Jefferson High, a school of 2,600 with "2,400 cars in the parking lot." M.L. drove an old Buick and joined the choir "to get out of study hall." Otherwise his youth was rough. He recalls going out for football practice and accidentally "getting hit in the head by a 12-pound shot - at 62 feet." He claims, "I used to throw guys through plate glass windows. I drove through on myself on a cycle." 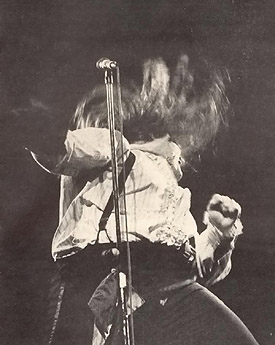 Meat says he breezed through high school by age 15 - and picked up summer school credits at Lubbock Christian College. He then joined a string of itinerant bands including Ted Nugent's Amboy Dukes. He broke briefly into films as the lobotomized rocker in the cult hit The Rocky Horror Picture Show - but later turned down a part as a rapist in Charles Bronson's Death Wish.

Loaf got hot in 1973 when he hooked up with Steinman, a gifted composer and Amherst graduate. ("I was thrown out four or five times"). He writes all the group's vividly absurdist songs for Meat's multi-octave bellowing. The rest of the "motorcycle rock" sound comes from Loaf's eight-member backup group. "Our songs," judges Steinman, "are sardonic, operatic, desperate, extreme and really passionate. There's something dangerous to it - rock should have a mystic dimension. The fun is going over the edge."

Loaf and Steinman hole up in separate apartments on New York's Upper West Side. Meat shares his place with 23-year old Candy Darling, a dancer-singer who once was backup vocalist Rory Dodd's girlfriend. "I'm ruthless - got no heart," Loaf explains. "She's the only woman I can stand for more than 10 minutes." But he adds, "If you're obsessed with this business, then you've got no time to be obsessed with women, and many of them can't stand that. But if you're not obsessed with this business, then you've got no right to be in it."